Christian Science teaches that God's man expresses eternal joy. It seems, though, that humans do not always express this God-given quality. A growing number suffer from various stages of depression. But the fact is that we can destroy depression and find real joy by applying, with diligence and understanding, the truths stated in the Bible, and Science and Health by Mrs. Eddy.

Science and Health tells us: "Material sense expresses the belief that mind is in matter. This human belief, alternating between a sense of pleasure and pain, hope and fear, life and death, never reaches beyond the boundary of the mortal or the unreal." Then it goes on to give us this wonderful hope: "When the real is attained, which is announced by Science, joy is no longer a trembler, nor is hope a cheat."  Science and Health, p. 298.

The essence of depression is the misconception that life and substance are inherent in matter, that joy can become sorrow and hope despair. If this misconception were true, there would indeed be something to cause depression. But as the Bible assures us, "God saw every thing that he had made, and, behold, it was very good."  Gen. 1:31. Who can reasonably assume that a benevolent God, who created everything and knew that it was very good, could bring sorrow and despair to man, His image and likeness? God's benevolence is all-encompassing. God's man stands in the full light of His benevolence, and in turn reflects it fully.

For Christian Science to be practical it must be applicable to the human situation. Humanly, then, we need to express God in such qualities as kindness, joy, charity, compassion, intelligence. The full brightness of any of these qualities, brought to bear on the darkness that is depression, will light up that darkness, causing it to vanish.

This does not necessarily mean that a passing pleasant word or simple expression of affection can instantly erase depression— although a simple expression of Christly love can sometimes heal the most stubborn sickness. But we must be certain to turn the radiance of God's love on the sickness called depression for it to be irrevocably healed.

In my own experience, for as far back as I can remember, I was plagued by frequent attacks of depression. I managed to suffer through them but functioned at a much-reduced level of joy and efficiency. When the antidepressant drugs came on the scene, a medical diagnosis established that a certain gland in my brain was malfunctioning. The drug chosen to relieve this condition held no promise of a healing, only relief.

Taking this drug, I found no real relief, for it inflicted side effects that at times were as destructive as the disease it was prescribed to relieve.

Then a personal tragedy came into my life, and in desperation I turned wholeheartedly to Christian Science. (During my early years, I had been a student of Science, but had stepped aside from its teachings to follow other lines of thought that always led to dead ends.) I called a Christian Science practitioner, and during that conversation the healing began. I was able to stop all medication; the depression lessened and after several weeks disappeared. It has never returned.

Through this healing, I grew to understand that the action of the brain cannot control man, who is subject, through reflection, to God alone. God, divine Mind, is the only power; and the brain, a product of mortal mind, has no power to produce any part of reality. Mortal mind says that a person expresses joy, sadness, ecstasy, anger—the whole gamut of human emotions—because his brain tells him how he feels and how he must act. And of course the five senses are supposed to send messages continually to this brain for it to act on. But even mortal mind admits that these messages are often fallacious, and Christian Science has proved through demonstration that they are always so, because matter is actually nonintelligent, unreal. This false mental activity illustrates something of what Science and Health calls "the ghastly farce of material existence."  Science and Health, p. 272.

Since man is created by God, is it possible that he is at the mercy of this "ghastly farce"? Christian Science teaches that this is not possible, that the likeness of God is, with infinite love, guided and protected by Him, and is totally under His beneficent care and direction.

Unless we believe that God, Life, is subject to death—which is an absurdity—we must understand that man cannot die, cannot be subject to mortal mind, because God is man's life. Since man is made in God's image, he is never subject to sin, disease, and death, nor for that matter to any of the other vagaries, including depression, that mortal mind seems to impose on suffering mortal man.

So depression, sadness—products of an unreal, erroneous mortal mind, which carries the seeds of its own self-destruction—are no part of God's man, the only man who really exists. One of the synonyms for God, as stated in Science and Health, is "Mind." Since divine Mind created man as its full reflection, man expresses perfect Mind.

The consciousness or nature of God's man manifests only the everlasting qualities of freedom, peace, joy. Expressing joy, man cannot be controlled by or include depression. St. Paul counsels us, "Let this mind be in you, which was also in Christ Jesus."  Phil. 2:5. Jesus consciously embodied the Christ, which is defined by Mrs. Eddy as "the divine manifestation of God, which comes to the flesh to destroy incarnate error."  Science and Health, p. 583.

Depression is one of the elements of error, and we can replace it with joy as Christ, Truth, transforms our thinking. Through the study and application of Christian Science, each one of us can let "the divine manifestation of God" into consciousness. Then depression will disappear, and joy will be an indestructible part of our lives. 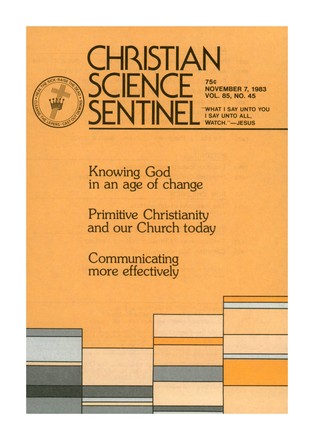 Knowing God in an age of change

A lesson on devotion

"Delight thyself also in the Lord"

Primitive Christianity and our Church today

I hope this testimony will bless someone who...

When my husband retired a few years ago, we decided to...

By MARJORIE A. FOSTER with contributions from GEORGE C. FOSTER | November 1983

I have known of Christian Science since I was very young, as we...

I was able to attend the Christian Science Sunday School and to...