Unto thee, O Lord, do I lift up my soul.

Ye shall be holy: for I the Lord your God am holy.

Ten chapters of Leviticus (17–26) contain what is known as the Holiness Code—a list of laws relating to ethical behavior. As a primary quality of God, holiness undergirds His laws and characterizes His people. One source notes that pagan worshipers did not look to their gods for standards of moral behavior: “Often the pagan deities were more sensual and debased in their actions and character than the mortals who strove to worship them. Not so with Yahweh, who is holiness itself and a model for all.”

First Peter cites this verse centuries later: “As he which hath called you is holy, so be ye holy in all manner of conversation; because it is written, Be ye holy; for I am holy” (1:15, 16).

Let them that love him be as the sun when he goeth forth in his might.

After her decisive defeat of the Canaanite army, Israelite judge Deborah sings a song of victory. Her petition, explains a researcher, asks that God’s chosen “may be as the rising sun dispelling the shades of night and bringing light and prosperity to the land.”

Jesus echoes Deborah’s words when interpreting one of his parables: “Then shall the righteous shine forth as the sun in the kingdom of their Father” (Matthew 13:43).

Abraham said unto his eldest servant of his house, that ruled over all that he had, Put, I pray thee, thy hand under my thigh: and I will make thee swear by the Lord, the God of heaven, and the God of the earth, that thou shalt not take a wife unto my son of the daughters of the Canaanites, among whom I dwell: but thou shalt go unto my country, and to my kindred, and take a wife unto my son Isaac.

Since by this time Abraham is one hundred forty years of age, he designates his most trusted servant for the delicate task of finding a wife for Isaac among Abraham’s own people. His motive for focusing the search on his far-off family was not based on shared faith—they were almost certainly still polytheistic in their religious worship—but on their common ancestry.

Abraham’s servant is thought by some sources to be his longtime steward Eliezer, referred to before Isaac’s birth (see Genesis 15:2). The ritual of putting a hand beneath a thigh represented a solemn, unbreakable oath of obedience and loyalty. It is used again at the time of Jacob’s death (see Genesis 47:27–31).

And [Rebekah] said, Drink, my lord: and she hasted, and let down her pitcher upon her hand, and gave him drink.

Rebekah’s betrothal story is a type-scene—a literary device that repeats a sequence of events to illustrate patterns or themes. The account of the meeting at the well is similar to narratives about the meetings of Jacob and Rachel (see Genesis 29:1–20) and Moses and Zipporah (see Exodus 2:15–21).

Because Isaac’s mother was no longer living, Rebekah assumes the role of matriarch upon her marriage to Isaac—a status symbolized by his taking her into his mother’s tent (see Genesis 24:67).

Thy Maker is thine husband; the Lord of hosts is his name; and thy Redeemer the Holy One of Israel; the God of the whole earth shall he be called.

Characterized as a barren woman, a widow, and a forsaken woman (see vv. 1, 4, 6), the nation of Israel is now assured of God’s husbanding. Each divine title—Maker, Lord of Hosts, Redeemer, Holy One of Israel, God of the whole earth—emphasizes His power to protect and comfort His people. And like the intent of a marriage vow, His commitment to them is permanent and lasting (see v. 10).

Now there was at Joppa a certain disciple named Tabitha, which by interpretation is called Dorcas: this woman was full of good works and almsdeeds which she did. And it came to pass in those days, that she was sick, and died: whom when they had washed, they laid her in an upper chamber. And forasmuch as Lydda was nigh to Joppa, and the disciples had heard that Peter was there, they sent unto him two men, desiring him that he would not delay to come to them.

In both Jewish and Christian traditions of the time, widows were to be cared for by the community. Tabitha’s death appears to have represented the loss not merely of one of their number but of one who provided for their needs (see v. 39). A scholar observes, “Tabitha’s service to the community of women at Joppa is indeed to be valued as a model of discipleship.”

Lydda, located about nine miles (15 km) southeast of Joppa on the road to Jerusalem, was known in New Testament times as a center of scholarship and commerce. Peter’s healing of the paralytic Aeneas there drew many converts to Christianity (see vv. 32–35), resulting in a strong Christian community.

Joppa was an important seaport nearly forty miles (65 km) west of Jerusalem. In the Hebrew Bible, it is mentioned as a place Jonah fled from God (see Jonah 1:3) and the port through which the cedars of Lebanon were brought during the construction of the first and second Temples (see II Chronicles 2:16 and Ezra 3:7). Today it is a neighborhood of Tel Aviv known as Jaffa.

You are married now!

By Karen Cornell Wilson
From the June 6, 1970, issue of the Christian Science Sentinel

It’s true! Every individual in this universe already has a more wonderful marriage partner than the world has ever known—God.

The Bible has taught man’s marriage with God for centuries. Hosea pictured divine Love promising this spiritual union by saying, “I will betroth thee unto me in righteousness, and in judgment, and in lovingkindness, and in mercies.… Thou shalt know the Lord” (Hosea 2:19, 20).

By now you may be thinking, “That’s great for Bible times. But isn’t it a little abstract for my life today?” No. But our feeling of unity with divine Love doesn’t come through some magic hocus-pocus. It needs to be learned, be fully known, worked at, and practiced in daily life.

I found this out for myself one night after some very long and dateless months. Determined to approach marriage from a strongly spiritual point of view, I finally sat down for some honest, thorough study of the Bible and Mary Baker Eddy’s writings. What I uncovered fairly revolutionized my thinking and changed my life.

This is the sentence from Science and Health with Key to the Scriptures by Mrs. Eddy that started it all: “ ‘Arise from your false consciousness into the true sense of Love, and behold the Lamb’s wife,—Love wedded to its own spiritual idea’ ” (p. 575).

This was a stirring rebuke, a mind-bending statement. I thought about it for a long time, and then suddenly the scriptural promise of the oneness and unity of God and man made sense.

Think of this yourself for a minute. Man is an idea, the idea of Love, eternally wed to God, never separate from Him. In the divine—and you and I have a Godlike individuality that’s entirely different from the mortal—this marriage exists forever.

Well, as I thought about these truths that night, a warm encouraging peace settled on me. I felt God’s love so close that I knew the loneliness was healed. But I did not stop there. For the next few weeks I studied every night. The day I finished I met my husband in a Christian Science Reading Room.

Let us be clear that human marriage may not be for everyone. Some people just don’t need or want it. But whatever your own feelings may be, you do need the wonderful sense of oneness with God.

Spiritual law provides the legitimate affection of Soul for each one of us. Understanding this establishes your right to a satisfying life now.

Nothing can separate you from others or deprive you of the right relationship that assists you in your spiritual growth. Infinite Love is always present, directly communicating love to us. When you understand and fully accept this truth, you will not find yourself continually “put off” in your natural desire to share love. And you will have the immense satisfaction of feeling unreservedly loved by Love in the most fulfilling relationship one can have—union with God.

You are not on a shelf, living in a state of suspended anticipation, waiting for the march down the aisle! You are the idea of Love itself. You have a wonderful thing going with God: a close relationship. Enjoy it!

To read the entire article, which has been shortened to fit this page, go to jsh.christianscience.com/you-are-married-now. 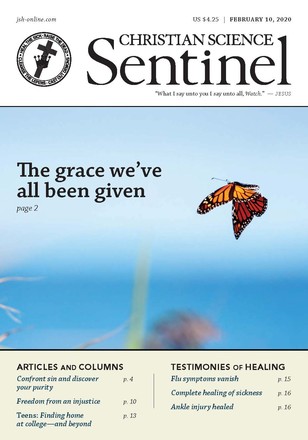 The grace we’ve all been given

Confront sin and discover your purity

Found: Freedom from an injustice

Finding home at college—and beyond

'Metaphysics, not physics, enables us ...'

Do I really want to be sinless?