Even though it was written in 1883, this timeless article by Mary Baker Eddy from her Miscellaneous Writings 1883–1896 offers a concise yet thorough analysis of what’s going on during times of contagion. It shows how we can play a part in containing the spread of “common consent” that “makes disease catching,” as it says.

We invite you to ponder this article along with us.

Whatever man sees, feels, or in any way takes cognizance of, must be caught through mind; inasmuch as perception, sensation, and consciousness belong to mind and not to matter. Floating with the popular current of mortal thought without questioning the reliability of its conclusions, we do what others do, believe what others believe, and say what others say. Common consent is contagious, and it makes disease catching.

People believe in infectious and contagious diseases, and that any one is liable to have them under certain predisposing or exciting causes. This mental state prepares one to have any disease whenever there appear the circumstances which he believes produce it. If he believed as sincerely that health is catching when exposed to contact with healthy people, he would catch their state of feeling quite as surely and with better effect than he does the sick man’s.

If only the people would believe that good is more contagious than evil, since God is omnipresence, how much more certain would be the doctor’s success, and the clergyman’s conversion of sinners. And if only the pulpit would encourage faith in God in this direction, and faith in Mind over all other influences governing the receptivity of the body, theology would teach man as David taught: “Because thou hast made the Lord, which is my refuge, even the most High thy habitation; there shall no evil befall thee, neither shall any plague come nigh thy dwelling.”

The confidence of mankind in contagious disease would thus become beautifully less; and in the same proportion would faith in the power of God to heal and to save mankind increase, until the whole human race would become healthier, holier, happier, and longer lived. A calm, Christian state of mind is a better preventive of contagion than a drug, or than any other possible sanative method; and the “perfect Love” that “casteth out fear” is a sure defense.

One needn't become mesmerized into believing in contagious disease and accepting its symptoms.Why not? Because the illusion of sickness is manifested through fear, and anyone can stop fearing. Thro...

Many people are spiritually demonstrating their dominion over contagion and other false beliefs of material law that would claim to rob them of their God-given freedom and harmony. We need not be h... 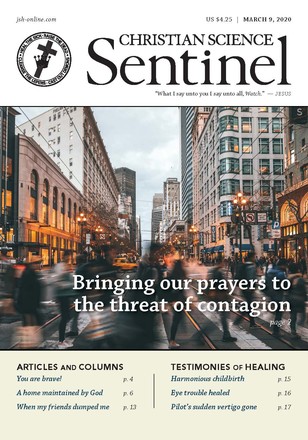 Bringing our prayers to the threat of contagion

A home maintained by God

Making the mountain a molehill

The true spirit of philanthropy

When my friends dumped me

Quick recovery from a fall

'For flower and fruitage now are seen ...'