When Mary Baker Eddy announced to the world that man is wholly spiritual, she started a revolution. The world, with its entrenched conviction that life springs from matter, felt the impact of the idea without understanding it. But the Christly power of this new concept of man still flows forth for the healing of the nations.

Today the human picture is of a world repeatedly torn apart by dissension. One of the most dangerous current forms of divisiveness is racism, and here the Christian Scientist is in a peculiarly strong position to bring healing.

Properly understood, the acute racial tensions of today are not forced on us by outside circumstance; they exist only in unspiritual human attitudes. For the belief that man is split up into races and that one race is superior, domineering, resentful, threatening, or indifferent to another is rooted in the false claim that man is a physical organism determined by material history.

As Mrs. Eddy puts it in Science and Health with Key to the Scriptures (p. 541), "The erroneous belief that life, substance, and intelligence can be material ruptures the life and brotherhood of man at the very outset."

For a century Christian Science has been pouring into human consciousness the revolutionary truth that man in his true being is the perfect spiritual expression of a God who bestows on each of His children unique individuality, boundless opportunity, divine equality.

Should we be surprised that millions throughout the world are struggling toward this light, crying out to be recognized as man? Are we prepared to take our own metaphysical assertions seriously and give to this great but confused stirring of thought the spiritual guidance—the healing—it so crucially needs?

Paul tells us that in Christ there is neither Jew nor Greek, barbarian nor Scythian. This revolutionary insight does not make for deadly uniformity but for lovely variety in the human family, as Mrs. Eddy repeatedly and tenderly refers to it. Christian Scientists of all races can and must learn increasingly to look beneath the racial label for the individual of Love's creating, the valued son of God.

This calls for more than vague goodwill; it calls for practical application in individual thinking, and also in church affairs, community outreach, and business relations. It calls upon every Christian Scientist to examine his own conscience honestly and heal whatever prejudices he may find in his thinking. In today's racial crisis there is no use saying: "This is not my problem. I am not a racist. I mind my own business. I'm kind to people of other races. Isn't that enough?"

The answer, for the Christian Scientist, is No! Nothing short of healing the problem is enough. Healing it requires prayer acknowledging the universality of God's love; and individual attitudes in accord with this love. 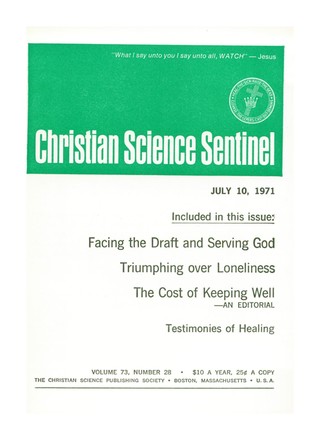 Facing the Draft and Serving God

By The Christian Science Board of Directors | July 1971

The Healing Power of Soul

The Cost of Keeping Well

After more than fifty years of proving the efficacy of Christian Science...

I am relating the following experience, which I had to go through...

I owe the happiness and harmony of my life to the study of...

By Anne H. Wold with contributions from Roger B. Wold | July 1971

I am thirteen years old, and I was born into a Christian Science...

Christian Science came into my life in 1929 when I was healed...