In the second semester of my junior year of high school, my precalculus class began to get more rigorous, and I found myself struggling to keep up with the material. In response, I devoted more time to studying. I watched online tutorials and color-coded my notes so I could get a firmer grasp on the unit. By the time the test came around, I felt proud of the extra work I had done and definitely prepared for the questions.

The test went just as I had expected, and my confidence rose with every problem I answered successfully. It wasn’t until I’d gotten through about half of the questions that I checked the clock for the first time. I was shocked to see that I had only about five minutes left! I tried to stay calm and focused on the test, but time seemed to accelerate and I was able to complete only a couple more questions.

As my math teacher slid the test out from under me, she remarked that I would have finished if I “had known the material.” Startled and hurt, I spent the remainder of the period trying to conceal my tears from my classmates. For the rest of the school week, I pretended that the test had never even happened and that I couldn’t care less if I got a bad grade on it.

However, when my teacher presented us with the option of a retest, I became conflicted. In order to take the retest, I had to complete a lot of extra homework, as well as devote some of my time after school to tutoring. Was the retest really worth it? After all, I had already decided that I didn’t care about my bad grade.

I realized that the only way I’d be able to move forward was to pray, because I really didn’t want to give in to apathy or resentment; I wanted to hear God’s direction. As I prayed, this passage from Science and Health with Key to the Scriptures came to thought: “Each successive stage of experience unfolds new views of divine goodness and love” (Mary Baker Eddy, p. 66).

I knew that part of seeing and expressing God’s goodness involved doing whatever I needed to do to move forward in my academic career. The right, God-directed step was to show that I did, in fact, know the test material. In doing this, I would be reflecting the spiritual quality of unlimited intelligence, which comes from God and which we all express.

After this insight, it was easy for me to do the extra homework and go to tutoring. I felt very prepared for the approaching retest, and the thoughts of bitterness toward my math teacher began to fade away as well.

On the day of the retest, however, I was confronted with an unexpected bout of anxiety. The same fears about time started to creep back in, and I began to worry that once again, I might not finish the test. If that was the outcome of the retest, I thought, then certainly all of the preparation I had done would have been for nothing. 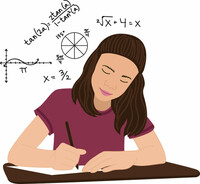 As I sat in the classroom, waiting for the retest to be handed out, I worked to calm my thoughts. As I prayed, an amazing idea occurred to me. I realized that the spiritual fact was that I existed in God’s perfect universe, which knows no construct such as time. So there was no fear, limitation, or impediment that could inhibit my expression of infinite Mind.

It wasn’t until I had finished the retest that I looked at the clock for the first time. I was shocked to see that I still had at least ten minutes left—something that’s never happened to me on a math test before! I knew that this was because I was conscious of existing in God’s infinitude, which knows no sense of time.

This experience opened my eyes to the way prayer really is effective in combating test anxiety. Afterward, I went on to handle other tests, such as Advanced Placement exams, with harmony and ease. I’m so grateful for Christian Science and for the strength it gives us to stand up to, and heal, our fears. 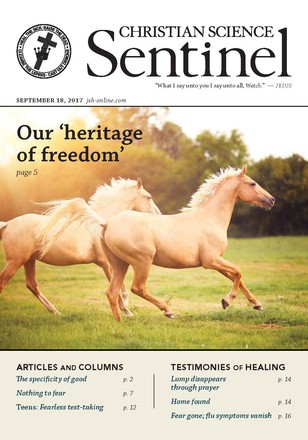 The specificity of good

Christian Science and our ‘heritage of freedom’

The lasting assurance of Christian Science

How to succeed in school

What Americans mean by ‘health’

By The Monitor’s Editorial Board | September 2017

Love and compassion in caring for health needs