I’ll never forget the first time I came home from camp. After my parents picked me up from the airport, we went to the park, where I found out my parents were getting a divorce. Feeling broadsided and shocked, I immediately blamed the divorce on my going to camp. After that, when my mom asked me each summer if I wanted to go back, I always said no because I was afraid that if I left, I would come home and be broadsided again.

Eventually, I did return to camp, and while I was there that first summer back, I couldn’t believe I had avoided going back for so long, because my experience didn’t include any sort of pain during or after, the way I had feared. The next year after that, I returned to camp without any fear or hesitation.

That year, I had a lot to learn. I was in a special program, and we had a blast. Everyone became a family. But even though I had overcome my fear of going back to camp, the experience still triggered that bad memory of returning home to upsetting news. I began crying out of nowhere and sobbed every time I thought about my father. Over the course of the two weeks, we participated in activities such as the ropes course, river rafting, and camping, and while I was having an amazing time, those bad memories were definitely holding me back.

One day we went mountain biking. It was my first time, and it was so exhilarating. The scenery was breathtakingly beautiful. The whole time, I was in awe of God’s amazing creation and felt so grateful to be a part of it.

Toward the end of the ride, while I was biking down the steepest part of the mountain, I took a sharp turn on the winding trail and fell into a patch of cacti. Because I was wearing shorts, the side of one of my legs was covered in cactus needles. I managed to bike down the rest of the mountain and made it back to camp. I went to stay at the Christian Science nursing facility and called a Christian Science practitioner to pray for me. I wanted those cactus needles out of my leg, but nothing would make them budge.

After trying lots of different ways to get them out, I realized I needed to pray. As I prayed, I began to see that those cactus needles were stuck just like those bad memories about my dad seemed to be stuck in me. All of the random crying was coming up because I was ready to deal with the divorce and all the unresolved feelings.

What really helped me was the article “Taking Offense” included in Mary Baker Eddy’s Miscellaneous Writings 1883–1896 (pp. 223–224). One part that stood out to me was: “The mental arrow shot from another’s bow is practically harmless, unless our own thought barbs it.”

This passage helped me realize that I did not have to let my experience in the past affect the experiences that I was having in the present. That past experience was powerless.

Later that night, all the needles came out when one of the nurses had me soak my leg. I was grateful, but my leg was still in a lot of pain.

At 3:30 the next morning, our camp group woke up and set out to peak a nearby mountain. Hiking up the steep trails and climbing over rocks felt difficult with my leg, and I was on the verge of tears the whole way up. Once we got to the peak, I was in complete awe of the beautiful scenery, and to see God’s work expressed all around me.

We had 45 minutes of alone time. Some people took naps; others ate. I, on the other hand, made a commitment to “un-barb the arrow.”

When we started down the mountain 45 minutes later, I consciously left the bad memories at the peak, and I felt all the hatred and sadness lift off my shoulders. The truth is that God’s love has always been with me; I can’t be separated from it. Love never left when my dad left my family; it never left when I was at camp; and it never left when I was mountain biking. And since God, divine Love, is my true Father, no matter who comes and goes in my life, I will always be safe and provided for.

Coming down the mountain, I was skipping the whole way, singing Broadway show tunes. The pain was gone and my leg was completely healed. In knowing that God is truly in control, I didn’t forget what had happened, but I was finally free from its effects. And I wasn’t anxious about returning home.

This was such an impactful healing, and I’m so grateful for what I learned from it. 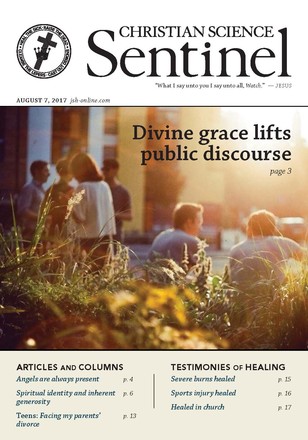 ‘Life is not dog-shaped!’

Profound results from a search for happiness

The power of the Word: writers and readers united as healers