A study of the words and works of the great Exemplar, in the light of Christian Science, reveals certain incidents in the life of Jesus applicable to the solution of every human problem. Confronting present world conditions following the great upheaval caused by the fiery storm of war, we seem to be surrounded by clouds of error, tempest tossed, and adrift upon a seething sea. The seeming is but the supposed opposite to the real, however, and its mesmeric effects with all accompanying doubts and fears can be scientifically dispelled by applying to present conditions the lesson of the storm upon the Sea of Galilee as given in the eighth chapter of Matthew. To the disciples this storm appeared very real, and they were fearful of destruction, even though their dear Master whom they had seen perform so many wonderful works was with them in the boat. They were terrified. He on the contrary calmly rested, unconscious of fear or danger. The Son of man was unafraid of wind—for that was all there was to it, a sudden storm of wind, which frequently occurred upon the Lake of Gennesaret, as the Galilean sea was often called. Christ Jesus was vitally conscious of peace and security, even while his companions reproached him with carelessness of their safety.

In divine metaphysics, any supposedly material element is recognized as audible error, or rather a belief in evil making itself heard, as well as seen and felt. Jesus had taught these very disciples to pray, "Thine is the kingdom, and the power," and had proved by divine authority that there could be in truth no power apart from God. The Master knew that material elements were without power to destroy and that by the process of reversal, to which every false claim is subject in Christian Science, this supposed power of wind must yield to the spiritual fact. This is shown on page 597 of Science and Health in the definition of wind: "That which indicates the might of omnipotence and the movements of God's spiritual government, encompassing all things." Then, continuing, she defines the counterfeit of this true wind as "destruction; anger; mortal passions."

But the disciples of Jesus failed upon this occasion to apply their knowledge of metaphysics. To their material senses the giant waves and the shrieking winds appeared very real, so that when the boat filled with water and began to sink they were consumed with terror. Yet in spite of the great tumult, their Master was calm. Christ Jesus knew no element of danger; the divine consciousness was and is eternally at rest in the security of omnipresence. Human consciousness, however, believing in the evidence of the material senses, indignant at the supposed unconscious sleeper careless of its safety, cried out, "Save us: we perish." Jesus awoke. To this man who understood God the material evidences of storm and danger meant nothing. How often had this evidence of the material senses tempted him to believe in it as real! At one time in his very presence it had thrown to the ground an epileptic boy, as though to say, "I will show you if I am not real!" Again it had tempted him through a withered arm, and even in the death of his well beloved friend Lazarus. But every effort of error to prove the evidence of disease or death to be true was rendered null and void by his supreme knowledge of reality.

The lesson of the storm reveals the fact that before rebuking the raging elements, the Master rebuked the lack of faith of his disciples: "Why are ye fearful, O ye of little faith?" Not until he had rebuked their fears did Jesus speak the "Peace, be still" to the winds and the waves. His voice was heard above the storm, for there followed "a great calm." The sea became as glass, the stormy winds as gentle zephyrs, the waves subsided, and the perfect day of God's creating was made manifest.

The lesson of the storm was not alone for that occasion, or period of time, neither was it given especially for that group of disciples. Its significance is proved as well as its application to present day conditions, through the spiritual understanding made possible by Christian Science. The solution of all problems is to know God, to realize Him as the source and condition of all. The belief in mental or physical disturbances has in truth neither reality or power because God is not the creator of evil; therefore evil has no origin and is not to be feared. To-day Christian Science utters the same gentle rebuke of the Master, "O ye of little faith,"—look beyond the evidence of the material senses, cast away the false witness, and believe only the true evidence of Spirit. Truth forever silences the untrue.

If the storm on the lake had been a condition created by God, could His beloved and obedient Son have annulled those atmospheric conditions against the divine will? The voice which spoke the word and stilled the storm is heard again through Christian Science. The wise are listening. The listening, translated by divine Science, is found to be a mental attitude, that element of humility and love which quells the storm invoked by pride, will power, and greed. Our boat upon the sea of experience will find a safe harbor against the shipwrecks of faith without understanding. As our dear Leader so faithfully points out in Science and Health (p. 203), "The foam and fury of illegitimate living and of fearful and doleful dying should disappear on the shore of time; then the waves of sin, sorrow, and death beat in vain." When fully understood, the truths of Christian Science prove that the real, spiritual man is already safely landed upon the golden shores of opportunity. 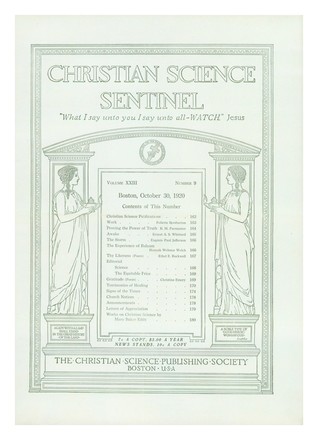 Proving the Power of Truth

The Experience of Balaam

Constant reminders of my abundant blessings, and of the...

I should like to express my deep gratitude for the great...

I wish to express my sincere and heartfelt thanks for...

A sense of gratitude for the help received through Christian Science...

There is only one way in which to express one's gratitude...

I have often longed to tell the whole world of my healing...

I enjoy reading the testimonies in our periodicals, and...

For a long time I have felt I should give my testimony...

I wish to join the most grateful of people in testifying...

With heartfelt gratitude to God I desire to give testimony...

Before they call, I will answer; and while they are yet...

By Clara Anderson with contributions from Henry Anderson | October 1920