While I was growing up in the South, my mom had a circular sign that hung in our house, labeled 'Round Tuit. The rear of the sign explained, "How many times have you said, 'I'll get to it when I get a 'round tuit'—well, now you've got one!"—leaving no more excuses for putting things off. I often used to think about that sign when, at work or at home, I found myself putting off projects with that exact sentiment in mind.

I've found that this problem of procrastination—a big symptom of burnout—boils down to the concept of limitation. The feeling of stalling necessary work often arises when there's a lack of enough time, energy, drive, or funding to move forward in a particular area. But on the flip side, it's possible to work furiously to the point of feeling completely burned out and still not make much real progress.

Over the years I've learned that the solution to stalled progress—whether labeled procrastination or burnout—is not to change a human sense of lethargy or apathy into a sense of rushing around frantically to get tasks done. But rather, the solution lies in finding the deep peace that comes when we truly trust God to facilitate our steps and strategies toward getting things done. Seeing that there is no power opposed to God, I've found that nothing can stop this progress.

I recently had the opportunity to demonstrate this kind of spiritual progress. I was working as the Director of Operations for an entertainment and retail destination in California. This job involved the oversight of many different disciplines, including budgeting and operations. Several months ago I began to feel "task-saturated" with a deluge of projects. I felt as though all these tasks were piling up with little forward progress, and I began thinking about how to get past this blockage of accomplishment.

It seemed that this situation was caused by a general feeling of job burnout, manifested in procrastination and my unwillingness to begin or finish a particular task. Sometimes a job seemed too unimportant, difficult, mundane, or complex to deal with, and often I simply felt busy with other more important things. It occurred to me that the solution was not to be found through seminars held by time management experts, but in my concept of God.

In Science and Health, Mary Baker Eddy defined God, in part, as "all-acting" and "all-wise" (p. 587). I reasoned that since we are each the expression of this perfect God, who governs all of our actions, then we have the innate ability to accomplish all that is needed without toil or burden. Each one of us reflects God as constant "progress-in-action," in which can be found no fatigue or delay.

We might define someone as an effective multitasker if he or she is good at undertaking more than one job at once. Yet God is what I would call an "infinity-tasker."

As God's reflection, we can no more be stopped from accomplishing right activity than a ray of sunlight can stop midway on its path to earth to hang out on a break for a while, or get delayed before starting again! No, sunlight effortlessly shines and can't be stopped from being what it is: the immediate expression of its source, the sun. And it includes all of the colors in the spectrum.

Like rays of sunlight, we too can express all of the facets, or colors, of God's nature without suspension or deferral. As a divine expression, we each reflect intelligence, not confusion; problemsolving ability, not creative paralysis; enthusiasm, not boredom; forward motion, not stagnation; synchronicity, not poor timing. These good qualities are all supported by laws of God and are assured before we even begin an undertaking.

As I continued to pray about how my projects would get done, I asked myself, Can God ever get too busy or overburdened, tired or uninterested? No, He's not a limited personality with limited "thought time" or energy. We might define someone as an effective multitasker if he or she is good at undertaking more than one job at once. Yet God is what I would call an "infinity-tasker"—He accomplishes all, in the eternal now of His perfect creation, unchecked by time or space. And since God is all-acting, there can be no moment when our progressive action is arrested, hindered, or obstructed. Because God is always progressing, we are, as His expression, constantly moving forward with accomplishment, purpose, and fulfillment.

As I thought about these ideas, I found additional inspiration in Mary Baker Eddy's incredibly productive life. She must have stayed very close to God and her divine purpose in order to do the monumental work of founding a worldwide church, healing hundreds, founding multiple magazines and The Christian Science Monitor.

But Mrs. Eddy's love for humanity and her prayerful conviction gave her the ability to accomplish everything she needed to, while continuing to heal and bless those with whom she came into contact. Her biographers tell of how those around her found themselves able to act with great efficiency and drive. For example, early Christian Scientists overcame huge barriers of time and resources in the construction of the Original Edifice and the Extension of The First Church of Christ, Scientist, known as The Mother Church, as well as the founding of the Monitor. I saw these as great examples of lives led by God, and I knew that the same divine direction and conviction would bless me, too.

Mrs. Eddy's poem "Mother's Evening Prayer," begins, "O gentle presence, peace and joy and power; / O Life divine, that owns each waiting hour" (Poems, p. 4). To me, this refers to the power each of us has to accomplish all that is necessary with peace and joy, every "waiting hour" of the day—and without procrastination or lack of enthusiasm.

Once I'd grasped these spiritual concepts, the trend of procrastination and barriers to getting things done at work just burst like a dam, and a flood of accomplishment occurred. Science and Health says that "... business men and cultured scholars have found that Christian Science enhances their endurance and mental powers, enlarges their perception of character, gives them acuteness and comprehensiveness and an ability to exceed their ordinary capacity" (p. 128). This statement certainly held true for me—I found that Christian Science brought so many blessings to me in the business environment. Keeping this at the forefront of thought, I not only stopped putting off tasks at work, but I found new and more efficient ways to approach projects and organize my time, thereby accomplishing more. I was better able to document the status of simultaneous projects, which aided the efficiency and organization of the entertainment center. I also appreciated the seamless communication and coordination with each of the departments for which I had responsibility. In fact, fiscal year expenses for the entertainment center came in hundreds of thousands of dollars under budget as the result of implementing these ideas.

I was simply waking up to the efficiency and intelligence that were already present and mine as a reflection of God. Since this experience, I have rarely had projects that sit idle for extended periods. I credit this to the realization that the responsibility to complete a task is never all up to me as a limited human with a brain that can be overtaxed. No, the solution, tactics, and motivation needed to accomplish the work are already present, since God's work is already done. We need only grasp this fact to see the solution appear—often immediately.

When we let God control our day, stalled progress and "burnout" yield to spiritual progress and action. Then, our success is assured. css

Blake Windal was a professional drummer, and is now the General Manager of a large entertainment and retail center in California. 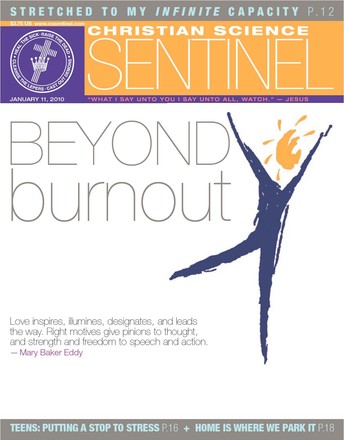 BURNED OUT OR FIRED UP?

STRETCHED TO MY INFINITE CAPACITY

PUTTING A STOP TO STRESS

HOME IS WHERE WE PARK IT

TO KNOW THAT GOD EXISTS

LIVING OUT THE INSPIRED WORD

AN ANSWER TO MY DATING DILEMMA

QUELLING ANGER IN THE POLITICAL ARENA