I first heard of Christian Science several decades ago when, as an Army officer, I had been assigned to a new post to attend a military war college. While getting acquainted with our new town, my wife wandered into a Christian Science Reading Room, where she learned a tiny bit about Christian Science and purchased two books by Mary Baker Eddy: the Manual of The Mother Church and Science and Health with Key to the Scriptures. She placed the two books on our bedside table and gave me this somewhat oversimplified explanation: “Today in a Christian Science Reading Room downtown, I bought these two books that we are supposed to read if we feel sick.” At the time, I didn’t give those books a second thought, because I was in excellent health and rarely sick.

Several weeks later, however, I woke up very early one morning sweating profusely, with a sharp pain in my chest and shortness of breath. My father had recently died of a condition the medical profession associates with these symptoms, and I thought I was suffering a similar episode. When the pain and sweating did not go away after several minutes, I opened one of those two books on my bedside table.

I chose the Church Manual because it was smaller. I stuck my finger between the pages and opened at random to page 42, where I saw the words “Alertness to Duty.” It was a church By-Law, and I began to read the first sentence of the paragraph: “It shall be the duty of every member of this Church to defend himself daily against aggressive mental suggestion,...” I did not get any farther in the sentence because I paused to consider what “aggressive mental suggestion” meant. I had not heard that term before, but I thought the writer was on to something.

While thinking about it, I realized that just the day before I had received the results of a personality test I had taken at the war college. The test results indicated that I had a “Type A personality—competitive, impatient, uptight” and that this personality type was prone to the same condition my father suffered from, which I feared I had inherited. I had let the suggestion that I was vulnerable creep into subconscious thought and was suffering from it.

As I was thinking about this, I realized that the chest pains had gone and that I had stopped perspiring and was breathing normally. The error had been exposed, and the difficulty disappeared immediately and never returned.

It wasn’t until I began reading Science and Health several months later that I learned that “aggressive mental suggestion” refers specifically to the belief that life exists in matter, and that we defend ourselves against it by knowing that God is Life and created everything spiritually. God made us in His image and likeness, meaning healthy and perfect.

Since then I have endeavored to be obedient to the Manual By-Law to defend myself daily against the belief that we live in matter. Whenever I feel ill or that something isn’t right with me, I reject this suggestion because it is unreal and unknown to God.

A few years later, I was diagnosed with pneumonia by an Army doctor and healed without medication through Christian Science treatment. This thoroughly convinced me that Christian Science heals. That same week I applied for membership in The Mother Church (The First Church of Christ, Scientist, in Boston, Massachusetts) and a branch Church of Christ, Scientist. I have been a healthy and happy member of both for over thirty years.

Send a comment to the editors
NEXT IN THIS ISSUE
Image and Inspiration
"Sing praise, O waking heart ..." 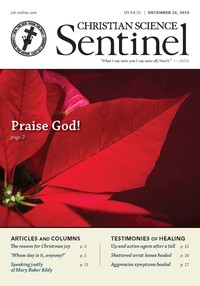