San Francisco, Cal.—First Church of Christ, Scientist, which represents an outlay of two hundred and twenty-five thousand dollars, was dedicated yesterday [Nov. 23]. This was the first occasion of the kind in San Francisco. The services were simple, meetings being held in the forenoon, afternoon, and evening.—San Francisco Evening Post.

Waco, Texas.—During the Texas Cotton Palace held at Waco, Nov. 1 to 16 inclusive, a booth was maintained by First Church of Christ, Scientist. Mrs. Eddy's writings, her life by Sibyl Wilbur, the Bible, and the Christian Science periodicals were kept on display. Two attendants answered questions concerning Christian Science and gave to every one who showed sufficient interest a Journal, a Sentinel, a pamphlet, or a Monitor. The Monitor was an especial favorite, our daily supply not being equal to the demand. The German literature, Der Herold der Christian Science, and the pamphlets printed in German, were very much appreciated by the Germans on German day. Our stock of Herolds was completely exhausted, while our supply of pamphlets was nearly so.—Correspondence.

Washington, D. C.—Fifty members of First Church of Christ, Scientist, at Columbia road and Euclid street northwest, formally withdrew from that organization at a meeting Nov. 25 to form Second Church of Christ, Scientist, in this city. The action of the fifty members was taken at the request of the officials of First Church, who recently announced in a circular to the membership, that another branch of the denomination in this city had become necessary, owing to the overcrowding of the edifice on Columbia road. Immediately after securing their letters from the clerk of First Church, the members went into executive session and elected readers.

Melbourne, Australia.—On a recent Sunday an elderly gentleman entered the Athenaeum after the evening service had begun, and an usher showed him to a vacant chair in the front row. His attention to the reading was close, and on leaving the hall he remarked to an attendant: "Last Sunday I heard a sermon by a doctor of divinity against Christian Science, and I came here tonight to know something about it. Now that I have been here, I wonder why it is that these ministers cannot leave you people alone."—Correspondence.

Chicago, Ill.—Dedicatory services were held [Nov. 23] in Eighth Church of Christ, Scientist, of Chicago, South Michigan avenue and East 44th street. This edifice was opened June 25, 1911, and has been used regularly since, but is now being dedicated free of debt. The building has an auditorium with a seating capacity of thirteen hundred.

Santa Monica, Cal.—With a service marked for its simplicity, yet for that very reason most impressive, the beautiful new church of the Christian Science people of this city was dedicated yesterday [Nov. 23] to the service of God, in the presence of a large gathering of devoted members and others.

Cincinnati, Ohio.—The beautiful and artistic temple of the congregation of Christian Scientists on Park avenue was dedicated yesterday [Dec. 7]. The church property cost one hundred and twenty-five thousand dollars. 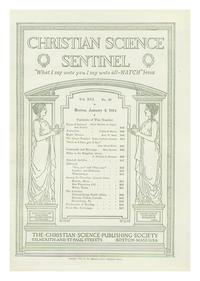