According to Scripture it is evident that pestilence and plagues were regarded by the Hebrews as punishment for defiance of and disobedience to God's will or law. Following Pharaoh's defiance of the demands of Principle as voiced by Moses, the Egyptians were visited with various plagues; and the children of Israel, during their wilderness wanderings, also suffered several tragic experiences due to their disobedience to moral and spiritual law. The Israelites supposed that God had sent the ills upon them, whereas it is plain that the pestilence and pain were punishments self-inflicted through their disobedience. The mental origin and nature of sickness, including so-called contagious diseases, is thereby plainly shown. Moses and other Old Testament characters voiced promises of protection from sickness for those who conformed to the law of God. The Psalmist sang, "Because thou hast made the Lord, which is my refuge, even the most High, thy habitation; there shall no evil befall thee, neither shall any plague come nigh thy dwelling."

However, the important truth as to the origin and nature of so-called disease has long been lost sight of because religious teachings have become permeated with medical theories and material beliefs, and men have been falsely educated to regard both health and sickness as physical conditions. Mankind's fettering fears have been multiplied by the process of examining throats instead of thoughts and looking to nonintelligent medicine rather than divine Mind for healing and protection. Repeatedly it has been shown that public warnings against contagious diseases and advertising of them by newspaper accounts have so stirred and fanned human fears as seemingly to spread the trouble. This has been observed and commented upon by some honest doctors of medicine who have warned against such harmful procedure.

Mrs. Eddy's discovery resulted from her prayerful searching of the Scriptures, and thus Christian Science exposes the mental origin and nature of disease and reveals the spiritual means for healing it, no matter what its appearance and appellation may be. This is directly in line with the teachings and promises of the master Metaphysician, Christ Jesus, of whom it is recorded that by spiritual power and means alone he healed "all manner of sickness and all manner of disease among the people," and promised that those who believed on him—understood and applied his teachings—should do likewise. The truth about God and His good creation, as witnessed to in the Bible, constitutes the basis of Christian Science teaching and practice. From the logical basis that God's creation including man is good, like Himself, Christian Science deduces that whatever is unlike God, such as sin, sickness, fear, limitation, and all discord, is unreal, lawless, and powerless. These Christian Science declarations and deductions are capable of proof by anyone who is honest and humble, and who will consistently cling to the truth about God as taught by Christian Science, and will conform his thinking to that spiritual standard.

On pages 153 and 154 of "Science and Health with Key to the Scriptures" Mrs. Eddy deals helpfully with the thought of contagion. On the first of those pages she writes, "We weep because others weep, we yawn because they yawn, and we have smallpox because others have it; but mortal mind, not matter, contains and carries the infection. When this mental contagion is understood, we shall be more careful of our mental conditions, and we shall avoid loquacious tattling about disease, as we would avoid advocating crime." Christian Science discloses mortal mind, the trouble maker in this and every difficulty, as a falsity; but mortal mind being merely wrong thought, false belief, it is utterly devoid of Principle and power. To understand through Christian Science that sickness is not primarily physical, since it is a manifestation of fear or other wrong thoughts, which in turn are negative and powerless, destroys both fear of and belief in disease; and thus contagion is conquered Christianly and scientifically.

The alert, unselfish Christian Scientist recognizes that he has an opportunity and obligation to help others at a time of so-called contagious disease by the spiritual law he understands. He knows that he is not to attempt to give Christian Science treatment unasked, nor does he feel the need of doing it, for as he scientifically clears his own thought of fear and disturbing mental pictures by pouring in the truth about God and man, he acknowledges gratefully that God's protecting law is irresistibly operative for all. Repeatedly has Mrs. Eddy's statement in "The First Church of Christ, Scientist, and Miscellany" (p. 116) been verified: "At a time of contagious disease, Christian Scientists endeavor to rise in consciousness to the true sense of the omnipotence of Life, Truth, and Love, and this great fact in Christian Science realized will stop a contagion."

When human belief in limitation, helplessness, and fear gains sway in the thought of the business world, it seems to operate like a contagion. But Christian Science rouses its adherents to handle—prove to be nothing—that claimed contagion with the same perfect assurance which accompanies the conquering of a contagion called sickness. The Christian Scientist, armored with unselfed love and armed with the Word of God, faces every adverse situation or condition fearlessly, because his trust is in Almighty God, who ever careth for His own. 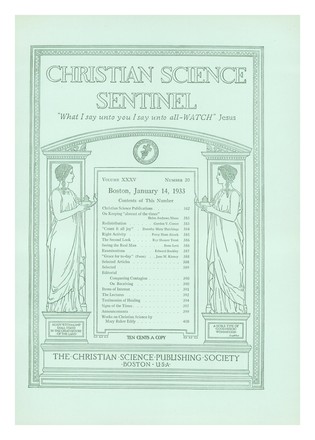 On Keeping "abreast of the times"

"Count it all joy"

In reply to the letter of a clergyman in your issue of...

An item under the caption "Epworth League Begins...

Clyde Johnson, former Committee on Publication for the State of Wyoming, | January 1933

For a group of persons of one religious denomination to...

From an address delivered by the Hon. C. Augustus Norwood before Woman's Alliance of Parker Memorial of Bulfinch Place Church, | January 1933

Anyone who is bending all his energies toward reaching...

It is with deep love and gratitude that I give this testimony...

By William Gordon Shaffer with contributions from Rachel Shaffer | January 1933

I have received so much help from testimonies I have...

When I was a child, I had a disease of the bone which...