Mary Baker Eddy’s great admiration for President Abraham Lincoln is illustrated by an engraving that Eddy displayed in two of her homes. “The First Reading of the Emancipation Proclamation before the Cabinet,” originally painted by Francis B. Carpenter, shows Lincoln’s reading of the Proclamation on July 22, 1862. This subject matter tells us that Eddy not only admired the President, but supported his ideals. She displayed the print both at Pleasant View, where she lived from 1892 to 1908, and at Chestnut Hill, her home from 1908 until her passing in 1910.

Eddy lived through one of the most volatile periods in American history, the antebellum era, the period before the tragedy of the Civil War. This was a time of enormous tension between the southern and the northern states, for even though most Americans did not oppose the institution of slavery, many wished it confined to the South, and not expanded to the new territories of the “far West.” The Emancipation Proclamation, however, was a step in a very different direction: the complete abolition of slavery.

Unlike many Northerners, Mary Baker Eddy had had firsthand experience with slavery. As a young woman she had lived in North and South Carolina, during her brief first marriage to George W. Glover. No doubt her perspectives on slavery and abolition were shaped by her six months in the South. Eddy put it simply in her Message to The Mother Church for 1902: “… I could never believe that a human being was my property” (p. 15).

Unlike many Northerners, Mary Baker Eddy had had firsthand experience with slavery.

After her discovery of Christian Science, she saw that the lessons of the Civil War could be applied to her own campaign to forward Christian healing. In a sermon she delivered in Boston in 1880, she declared: “Strange as it may sound in the nineteenth century, and in America, where the statue of our Lincoln is represented blessing the oppressed, a majority of the states in our Union have by law precluded healing the sick unless a man is authorized by a board of censors to do this and how to do it. Is it civil or religious despotism, yea is it not both that enacts laws prohibiting the rights of conscience, and vainly essaying to annul divine decrees? Our Master said, ‘And these signs shall follow them that believe, they shall lay their hands on the sick and they shall recover’ ” (A10357, The Mary Baker Eddy Collection, The Mary Baker Eddy Library).

A fascinating footnote to the Lincoln-Eddy story: Several members of Lincoln’s family became interested in Christian Science, including his daughter-in-law Mary Harlan Lincoln, and his granddaughter Mary Lincoln Isham. In 1975 the mansion “Hildene,” built by Lincoln’s son, Robert Todd Lincoln, was bequeathed to The Mother Church by the President’s great-granddaughter Peggy Beckwith, a grateful student of Christian Science. (The Church sold Hildene to an organization that maintains the home as a museum in Manchester, Vermont.)

In accord with proclamations from the Governor of Massachusetts, The Mother Church held special “Lincoln Day” services on February 12 (the President’s birthday) from 1907 to 1910. Special Lesson-Sermons were read at these services. The subjects were “Liberty and Freedom,” “Emancipation,” “Freedom,” and, in 1910, “Liberation”—fit tributes to the President and to a Science that teaches the liberating power of the Holy Spirit. 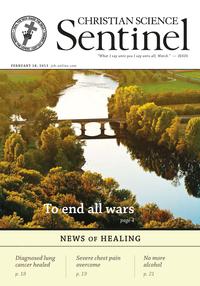