‘How is God even relevant to me right now?’

Christian Science Sunday School, quick healings, even regular reading of the Christian Science Bible Lesson—these had been constants during my childhood and early teen years. But about halfway through high school, I couldn’t shake a question that kept coming to me: How is God even relevant to me right now?

Even though I had so much evidence in my life that God was a very powerful presence, this question was persistent in tempting me to believe otherwise. I also struggled with thoughts that suggested that being a Christian Scientist meant being naive to the world, and that I was missing out on a lot of fun. The more I focused on these suggestions, the more God seemed to fade from my thoughts.

Social drinking became a regular part of my life, and initially I even convinced myself that a lifestyle based on partying and self-gratification was making me happy. The thing was, though, I never got any real satisfaction from it. In fact, I started to become depressed and introverted. I wouldn’t speak to my friends at school, and all I could think were dark thoughts about myself and my relationships with others. I totally lost interest in Christian Science, and if I ever tried to pray, my prayers felt abstract, disconnected from God, and pointless, instead of feeling tangible and powerful as they had in the past.

A few years into this new lifestyle, even though I was apathetic-bordering-on-antagonistic toward Christian Science, I ended up attending a camp for Christian Scientists. One thing that stood out to me when I got to camp was how happy everyone was. It actually creeped me out a little at first because I just couldn’t comprehend how these people could be so genuinely happy. It wasn’t a surface level having-a-good-time-with-friends happiness. It was a deep, satisfied-and-content-in-life happiness.

A couple of days into camp, I couldn’t deal with it anymore. I could see that the joy these people were expressing wasn’t dependent upon their circumstances or upon being around certain people. However, I also didn’t want to believe this joy was coming from God; I hadn’t felt God’s presence or heard Him speak to me in years.

In my room, with tears streaming down my cheeks, I reached for my Bible. I sort of begged God to prove Himself to me in that moment. I told Him that if He was there, then when I opened the Bible, my eyes would land on a verse that would tell me He was there.

Honestly, I wasn’t expecting anything. In some ways I think I was actually hoping to disprove the presence of God once and for all. Instead, I opened to this verse from Psalms: “In my distress I called upon the Lord, and cried unto my God: he heard my voice out of his temple, and my cry came before him, even into his ears” (18:6). I was completely in awe that I had turned to such a relevant verse. I also knew it couldn’t be coincidence, because as I read the verse, an overwhelming feeling of peace and pure love came over me—love that I hadn’t felt in a long time, and that didn’t come from just reading a verse in the Bible. In that moment, I knew without a doubt that God was there and that He was going to help me out of the mess I was in.

After that, I wanted to do everything I could to find out more about God and my relationship to Him. I really wanted to rediscover what I had known to be true all those years ago. I read the chapter in Science and Health with Key to the Scriptures by Mary Baker Eddy, called “Christian Science Practice,” and I applied to take class instruction—a 12-day course in spiritual healing and understanding God better, which I took the following summer.

This renewed understanding brought with it a more substantial happiness than I had known in years, and I was completely healed of the depression. My attempts to find happiness in drinking and other forms of self-gratification also started to drop away as I realized that true happiness comes from God. And not only was this happiness expressed in me all the time, but it was also way more satisfying than anything I’d tried to find elsewhere.

Science and Health says, “The maximum of good is the infinite God and His idea, the All-in-all” (p. 103). I’ve come to see that there is nothing that makes me happier than grasping a little more each day of the “maximum of good” through my study and practice of Christian Science—and there’s nothing that’s more relevant to my life or the world. 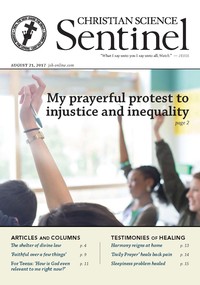