The editorial on the facing page tells of religious groups rallying to support a Jewish temple whose cemetery had been vandalized. The spontaneous outpouring of kindness—practical and prayerful—was an encouraging example of unity and love.

Interestingly, the St. Louis, Missouri, Jewish community felt that the response they experienced, “while extraordinary, was not surprising.” So questions worth considering might be: Are hate crimes normal behavior and the compassionate response the exception? Or is it the other way around? Is it, in fact, the natural inclination of people to be loving, charitable, and humane?

Jonathan Sacks, former chief rabbi of Britain, cites a Bible verse as the basis for understanding how unity can exist among Christianity, Judaism, and Islam: “And God said, Let us make man in our image, after our likeness” (Genesis 1:26). If we accept that, Mr. Sacks writes, “then the greatest religious challenge is, ‘Can I see God’s image in someone who is not in my image? Whose color, culture, or class is not mine?’ ”

This verse in Genesis affirms the spiritual goodness of all men and women. Other Bible verses echo this premise, including, “Have we not all one father? hath not one God created us?” (Malachi 2:10) and “Owe no man any thing, but to love one another: for he that loveth another hath fulfilled the law” (Romans 13:8).

Perhaps the most indelible example of someone coming to the aid of someone with different beliefs is found in Christ Jesus’ parable of the good Samaritan (see Luke, chap. 10). In answer to the question “Who is my neighbor?” Jesus tells of a Jewish man who was beaten, robbed, and left for dead by the side of a road. Two fellow countrymen ignored him. Yet a Samaritan, a man whose culture was rejected by the Jews, stopped and provided compassionate and practical aid. The moral, Jesus said, was “Go, and do the same.”

Today, are we doing the same? Are we looking beyond cultural and religious differences to see the deeper, spiritual likeness in our brothers and sisters? Mary Baker Eddy wrote: “With one Father, even God, the whole family of man would be brethren; and with one Mind and that God, or good, the brotherhood of man would consist of Love and Truth, and have unity of Principle and spiritual power which constitute divine Science” (Science and Health with Key to the Scriptures, pp. 469–470).

Our ability to give this unconditional love is strengthened by understanding that we are all one universal family. The relation each of us has to God is inseverable, a premise that shows harmonious connections among all people as normal and natural.

And so it is that our intuitive inclination to love and care for each other springs from our common divine source. Mrs. Eddy offers this idea to promote that unity and healing: “Father-Mother is the name for Deity, which indicates His tender relationship to His spiritual creation” (Science and Health, p. 332). We can each reflect God’s “tender relationship” to Him—and our spiritual relationship to one another—in warmth, compassion, and kindness.

Adapted from an article published in The Christian Science Monitor, March 17, 2017. 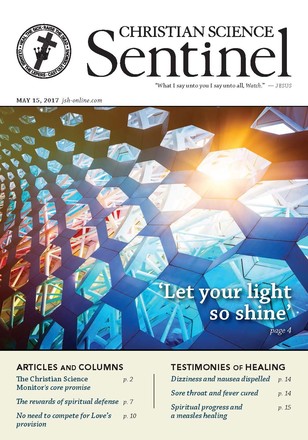 ‘Let your light so shine’: Be a transparency for Truth

The rewards of spiritual defense

Rotation on the Christian Science Board of Directors

From The Christian Science Board of Directors | May 2017

No need to compete for Love’s provision

I knew that God was with me

Spiritual progress and a measles healing