While I was on vacation, funds in my checking account were stolen. I was left with a balance of seven dollars and some change. I knew about identity theft and that criminals use people’s personal information for their own gain, so at first I blamed myself for giving my credit card information over the phone without making sure the caller was legitimate. I felt violated and angry.

What helped me begin to get past those feelings was the many times I had turned to God in prayer. The Bible tells us, “God is our refuge and strength, a very present help in trouble” (Psalms 46:1). I was certainly going to depend on that promise, even though the loss appeared irreversible.

To me, the funds in my bank account simply represented good bestowed upon me by a loving Father-Mother, God. One of the thoughts that came to me was that nothing good could truly be lost or stolen because the good God gives is spiritual, not material. God is infinite, and we can never be separated from Him.

God is infinite, and we can never be separated from Him.

I was also helped by this passage from a poem by Mary Baker Eddy: “Wait, and love more for every hate, and fear / No ill,—since God is good, and loss is gain” (Poems, p. 4). I needed to “love more for every hate.” The actions of those who had stolen from me were certainly not loving, but I was ready to wait on God and find out what good I could gain from this experience.

I also understood that divine Love, God, is not passive. In fact, Mrs. Eddy often pairs Love with another synonym for God, divine Principle, the source of all true law. As I saw it, this was an occasion for me to seek a greater understanding of the ever-presence of good given directly from God, and to expect a blessing.

Strengthened by this prayer, I reported the incident to my bank. The manager put an immediate stop on my credit card and my checking account, but she told me they could not reverse the fraudulent charges until the case had been thoroughly investigated. That was not good news, since the amount of funds taken was substantial and what was left was not.

As dire as that seemed at the time, I felt a need to look to a higher authority, to divine Principle, God. I understood God to be omnipotent and omnipresent, merciful and kind; also, just and wise. Thinking about Christ Jesus’ ministry, I recalled that he commanded each of us to love our neighbor as ourselves and said that our debts are forgiven as we forgive our debtors.

I see these points not as restrictive but as proactive in trusting God, good, to provide for all our needs. I was not being required to forgive greed or dishonest behavior, but simply to forgive. I needed to recognize that the individuals who had turned to crime were in actuality God’s ideas and really entrust them to God’s government. I knew they already had all they needed through their own inherent, unbroken relationship to God’s goodness.

Mary Baker Eddy, the Discoverer and Founder of Christian Science, writes, “ ‘All things work together for good to them that love God,’ is the dictum of Scripture” (Science and Health with Key to the Scriptures, p. 444). I love God and expect His righteousness to be demonstrated in my own life as well as others’ daily.

Claiming my right to see things working together for good, I remembered that the bank manager had asked whether I had made a certain charge on my bank statement. Even though all new charges had stopped on my account, my online banking account had a charge posted as “payment-in-progress.” I called the phone number below the charge and told the individual who answered the phone that someone other than myself had used my credit card to purchase that item. The company had not yet shipped the merchandise and immediately canceled the order. They thanked me for saving them a future dispute over payment.

Although I was grateful for this progress in reversing the theft, I still couldn’t get past the feeling of hopelessness about what had happened. At one point, I felt extremely apathetic, but I got myself moving again by insisting that prayer is effective in every aspect of our lives and must be demonstrated. I reminded myself of instances where personal items that had been lost or stolen had been quickly recovered through prayer alone.

Mary Baker Eddy wrote an arresting passage in her textbook of Christian Science: “… those who discern Christian Science will hold crime in check. They will aid in the ejection of error. They will maintain law and order, and cheerfully await the certainty of ultimate perfection” (Science and Health, p. 97).

I continued praying and being vigilant.

I could “cheerfully await the certainty of ultimate perfection” by relying on God as Truth and divine Principle, to bring about restitution and resolution. I was grateful for each person I had met thus far. I was also understanding more clearly that even the individuals who had committed this crime had a relationship to God, good, because of who they truly were as His offspring. This helped me obey Jesus’ command to “Love your enemies” (Matthew 5:44). I felt confident that at some point the commandment “Thou shalt not steal” (Exodus 20:15) would become real to them.

I continued praying and being vigilant. The next day, I came across yet another charge against my online banking from a region thousands of miles away. I immediately contacted the local authorities in that region, relaying my bank’s theft report information. The people I talked with said they would investigate and would notify other authorities as well. I was grateful that justice was continuing to be served.

Through this experience, I was finding a new calm and patience in my quest for a God full of mercy, justice, and truth. By the end of the week (not the several weeks my bank had forecast for their investigation), all funds that had been swiped from my account were replenished, and the authorities in three different jurisdictions were working together in pursuit of the criminals.

Prayer revealed to me that my true identity as God’s beloved child could not be stolen, marred, diminished, or depleted, no matter what balance I had in my bank account. Each of us is created as God’s beloved child. God keeps His children honest through their unity with divine Principle. We can all feel safe by consistently identifying man as God’s honest child, living in obedience to God’s direction, and expecting merciful loving-kindness and justice to win the day. 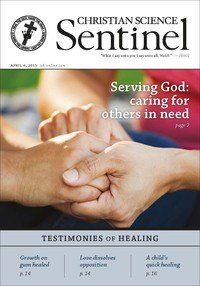