As I looked out the kitchen window, I saw smoke behind a hill on the horizon. Before I could get to the phone to notify the local fire brigade officer, it rang. He was ringing us, to ask if our farmhand Tony could go with the firetruck to fight the fire.

There was an orange glow in the sky when I went to bed that night. Throughout the night I prayed to know the power and presence of God, right where a bush fire seemed to be. In the morning we learned that the fire was still out of control, and that eight hundred acres had already been burned. When I asked Tony, after his night of firefighting, if there was anything that could be done, he replied, "Only pray" (probably more out of desperation than hope).

I had to ring to roster my husband for the evening firefighting team. The friend I spoke to told me the weather forecast was for a hot, dry day with high winds—dangerous conditions. I knew she was a religious person, so I mentioned to her that in the Lord's Prayer we pray, "Thy will be done" (see Matt. 6:10). Certainly, a raging bush fire was not God's will. She agreed.

As a Christian Scientist, I seek the solution to all problems in prayer. I had been praying. I felt I needed to pray better. I remembered a time several years before when I had prayed about a fire that was near our farm. I was so certain then of God's protecting power. Why was I feeling so fearful this time?

I studied the Bible Lesson from the Christian Science Quarterly and began to feel more peaceful. I held to statements from the Scriptures such as "The Lord thy God in the midst of thee is mighty" (Zeph. 3:17); and from Science and Health, "It requires courage to utter truth; for the higher Truth lifts her voice, the louder will error scream, until its inarticulate sound is forever silenced in oblivion" (p. 97). These ideas shed light on my struggle, and I felt encouraged.

At 2 p.m. it started to rain and continued to rain throughout the evening—a complete reversal of the weather forecast. By the next morning the fire was under control. "But it still isn't out, and we won't be safe until we have another five or six inches of rain." This comment left me murmuring to myself, "Aren't some ever satisfied?" But I pulled myself up. Why would we ever be satisfied with less than perfection? Christian Science teaches us that "perfection underlies reality" (Science and Health, p. 353). The rain began again, and within a day or so the fire was completely out.

I know I personally had nothing to do with the fire's being put out by rain. And there were plenty of people praying. Yet even if I had been the only one, the credit still always goes to God, who is the only power.

At this time I was also feeling disturbed by the loss of animals and trees in the wake of the fire. I was reminded that Life is indivisible. Life is One. God is Life, and no spiritual life can ever be lost. This is the perfection that is reality, despite the mortal, material picture.

I have had many proofs of God's care and protection. Specific healings include those of an injured back, estrangement from a stepdaughter, septic blisters, and a quick and harmonious childbirth. Also through prayer I have found employment. I am filled with gratitude. My family has relied on Christian Science for five generations. 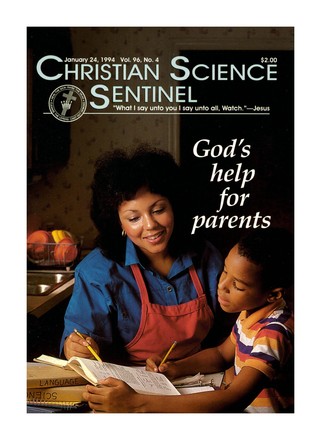 Searching for a parent? Turn to God

When we yearn to be healed of anger

A heart for community

The parenting of our divine Parent

Who would welcome sacrifice?

Early one afternoon I received a call from our daughter's...

As I looked out the kitchen window, I saw smoke behind a...

When I was a young mother, my husband and I were divorced...

"Consciousness constructs a better body when faith in matter...