There I was, inside a small airplane five thousand feet in the air and climbing. I looked out the tiny window at the ground, which was getting farther and farther away. "Butterflies?" my skydiving instructor asked me. "Not yet," I replied, and I silently added, "And I don't expect any!"

Although this was going to be my first jump, I was confident that I wouldn't be frightened because during takeoff I had glimpsed something of the unreal nature of fear. A typical recreational skydiver who fearlessly partakes of the sport on a regular basis was probably nervous before his first jump. The sport didn't change between his first and hundredth jump, but his thought about it did. Could it be that his fear was caused by a preconception of the activity and not the activity itself? Once he took his first jump, he realized that his mental concept of what it would be like was not accurate and that it was actually a joyous, fun activity worth repeating!

I saw that I could expect this same joy from the very start. Mary Baker Eddy writes in Miscellaneous Writings: "Divine Love is our hope, strength, and shield. We have nothing to fear when Love is at the helm of thought, but everything to enjoy on earth and in heaven" (p. 113). What a wonderful promise! The result of glimpsing these truths was that I enjoyed a harmonious and calm freefall. There was never even the slightest hint of "butterflies." In fact, I felt as though I had jumped a hundred times before.

Now, not everyone may plan to go skydiving, but we may all be confronted by the temptation to fear. It can be as subtle as a reluctance to make a telephone call or as blatant as an overpowering fear to leave the house. Are we afraid of being disliked or of becoming ill? Do we feel dread when we're given an assignment at work or in school?

What is fear anyway? Isn't it always a speculation that something bad is going to happen, a "what if...?" It is never directed at the present moment but, rather, focuses on an imagination of evil in the near or distant future. The difference between being afraid and not being afraid is accepting or not accepting an unreal mental suggestion, a "what if."

Being afraid is like looking through a translucent colored curtain at an object. We may be tempted to think that the object is the color of the curtain. The tint, however, comes from the curtain, not the thing behind it, and if we pull back the curtain, we see the object as it truly is. We need to pull back the curtain of fear to see God's creation as it truly is. The Bible tells us, "God hath not given us the spirit of fear; but of power, and of love, and of a sound mind" (II Tim. 1:7). This passage implies that being fearful is the opposite of having a sound mind, or, in other words, an understanding of what is true, or real. In Genesis, it is stated that God created man in his image and likeness and that everything He made was good (see 1:26, 27, 31). The lie that we are mortals, subject to chance, fate, inability, or inharmony of any kind must yield to the truth that we are spiritual ideas of God, subject only to good. And if we do find ourselves facing failure or illness, even then we can replace fear with the recognition of God's supremacy—and experience comfort and healing.

God is divine Principle, governing every aspect of man's life. Man is His expression, or idea, and is never separated from Him for an instant. God is Love, and the Bible assures us, "There is no fear in love; but perfect love casteth out fear" (I John 4:18). This promise applies to any activity, be it as radical as bungee jumping or as common as making a business presentation. Even the smallest victory over baseless fear benefits mankind by proving the fundamental truth that man is governed exclusively by his creator, divine Love.

Because divine Love is all-powerful and totally harmonious, we don't have to accept that fear is a necessary part of life. Mrs. Eddy never accepted fear as something to be bowed down to. She calls it "a self-constituted falsity ... darkness, nothingness" with "no right to exist" (see Retrospection and Introspection, p. 61). We have the God-given right to participate in any righteous activity without fear. We do not have to be afraid of getting hurt, of not having the needed ability, or of being condemned by others. Even when we appear to be right in the middle of threatening or challenging circumstances, we can safely rely on the omnipresence of God, good, and thereby experience joy and harmony right there and then.

Why is striving to prove the powerlessness and totally illusive nature of fear so important? For one thing, the healing of fear is directly related to the healing of disease.

This doesn't mean that our actions should be careless or without thought. It does mean that our lives should be directed by God at all times. This direction becomes apparent to us through spiritual sense, through listening for divine wisdom above the clamor of the material senses. No activity should ever be done out of human will or "thrill seeking" but rather should stem from listening to and obeying the leadings of divine Principle, Love. If our actions are in accord with Principle, we can be fearless.

Why is striving to prove the powerlessness and totally illusive nature of fear so important? For one thing, the healing of fear is directly related to the healing of disease. Those who came to Christ Jesus for healing were told to "fear not" and "be of good comfort." Mrs. Eddy, who explained the Principle of the truths Jesus taught, tells us in the Christian Science textbook, Science and Health, that disease is actually fear manifested on the body (see p. 493). She also states: "Fear, which is an element of all disease, must be cast out to readjust the balance for God. Casting out evil and fear enables truth to outweigh error" (ibid., p. 392).

It may seem easier to be complacent than to challenge the false beliefs and limitations we are confronted with daily, but this is required of us in order to make spiritual progress ourselves and to benefit others.

Man is in reality the image and likeness of God, divine Principle, possessing dominion over all the earth. Therefore we can expect and demonstrate harmony in our lives, free from the false sense called fear.

This article is included in:
1997 - PAMPHLET 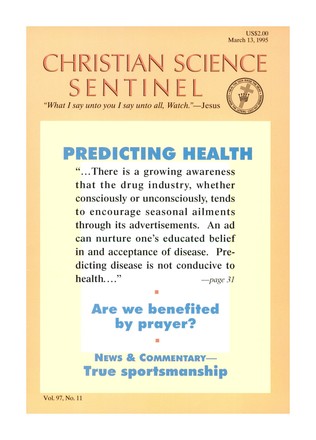 Are we benefited by prayer?

Mistakes have no hold on us!

By Written for the Sentinel | March 1995

Be a leader on your team

Understanding the falsity of fear

Go back to the beginning!

"The beauty of holiness"

Commitment to The Mother Church

By The Christian Science Board of Directors | March 1995

Scientific ethics—the Church and its mission

I found Christian Science in 1973

I had a healing of a hearing difficulty, in which I had to be patient...

Filled with gratitude for the blessings I have received through...

I am very happy to be a Christian Scientist—to be class taught...