Friendship AND FITTING IN

I used to struggle with making friends and trying to fit in. So I'd always find comfort in talking to adults, especially teachers. In elementary school, that meant I was called the "teacher's pet." At first, I thought it was cool to be a teacher's pet, until I found out that I was being teased for it. People described me as bossy, and sometimes I even used to yell at others to do things.

Then, middle school came along, and I tried to act like other people at school. Sometimes I bought the kinds of clothes that they wore. But trying to be more like someone else didn't help me make friends either. The truth was, I thought I looked chubby and didn't feel good about myself at all.

By eighth grade, I started acting like myself again. A big part of this was that I became part of a national leadership program for young Christian Scientists. Our first trip was to Boston for a national "Discovery Bound" event. While I was there, I decided that I would really be myself, and I met many new people. Everyone was so friendly, and I was having a great time. I went to several discussions about spiritual ideas, and I learned that I could actually pray about making friends.

So I prayed about expressing myself as God's child, and that other people would see my good qualities. I started out with just that thought, but when I confided in an adult at the event, he encouraged me to pray about this issue not just for myself, but for everyone.

When I returned home, that's what I planned to do. As I went into my freshman year of high school, I tried out for the school water polo team. I made the team and ended up being really close with my teammates and gained lots more confidence.

I was learning that praying about relationships worked. One idea that stuck with me was, "God created man in his own image, in the image of God created he him" (Gen. 1:27). To me, this means that I am spiritual, created to express qualities straight from God. Not only am I His child; everyone else is, too. Because of this, it's natural for us to be able to get along with each other. At the end of the first account of creation in the Bible, I found there was this verse: "And God saw every thing that he had made, and, behold, it was very good" (Gen. 1:31). I started to pray that I was naturally "good." And I really started to express myself as the true "image" of God and let my actions follow.

I soon realized that it doesn't matter what you wear or what you look like. It matters that you express your Godlike qualities. I started to find friends at school that accepted me for who I was. And I started to really enjoy life. It was nice to know that I could be who God meant me to be and make friends without feeling pressured to look perfect and act a certain way.

Since that trip to Boston with my leadership group, I've gone to several discussions and lectures about relationships and Christian Science. One discussion was about loving yourself first before you love anyone else. This comes from a passage in the Bible where Jesus talks about the two greatest commandments of all (see Mark 12:30, 31). We also talked about Jesus' Sermon on the Mount from the Bible, and how to love your enemies. I liked this part:

"Love your enemies, bless them that curse you, do good to them that hate you, and pray for them which despitefully use you, and persecute you; that ye may be the children of your Father which is in heaven" (Matt. 5:44, 45).

Loving my enemies was something that I'd struggled with. It was really hard! Sometimes I'd been in a group of people who talked badly about someone else, and I joined in. But I began to ignore the mean things people said, and instead actively see everyone as children of God, capable of realizing their kindness and potential.

One example, where I'd struggled to be good and "love my enemies," had to do with a girl at school whom I really disliked for no reason.

It wasn't like she was an "enemy," but everything she did just annoyed me, and I guess I felt like I was in constant competition with her. Last year, I had biology class with her for a whole semester, and I began to have hateful feelings toward her. And all I knew about her was her name.

I learned that I could actually pray about making friends.

This year, I had math with her for a couple of weeks, and she sat right in front of me. One day, we were going over homework and doing problems on the board. I was called on to do a problem. On my way up to the board, I tripped on a bag that I didn't see. This girl said sarcastically, "There's a bag there, you know." I was so angry. I didn't even really know her, and she was making fun of me! That whole day, I was mad. I complained to all my friends about how rude the girl was.

When I got home, I was still angry. But after I finished my homework, I decided to read the Christian Science Bible Lesson. I don't remember anything specific from the Lesson, only that I felt so peaceful after reading it. I also realized that the girl from math class naturally expressed God-given qualities, and I didn't have to have hurt feelings. We didn't have to be friends, but I could still treat her with kindness. This felt really hard for me to accept because I'd disliked her for so long. But it just seemed right for me not to be angry anymore.

The next day in math class, this girl turned around and actually started talking to me! We just had a nice simple conversation, and throughout the class we joked around with each other. We didn't become friends after that, but it made me happy that we could talk to each other.

I learned that when you see people as God sees them, you see them as they really are. Keeping this in mind, it's so much easier to appreciate yourself, and to make friends. css

Anna-Lena Hathaway lives in Southern California and is a sophomore in high school. She loves to play water polo. 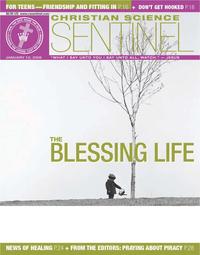