People came to Jesus for healing, for food, and for the good news—the words of the kingdom of heaven. They, including the disciples, came to get. But then, following Jesus’ crucifixion, resurrection, and ascension, the disciples changed from getters to givers. Jesus had prepared his followers for this change and had sent the 12 and the 70 out into the country to heal (see Luke 9:1–6, Luke 10:1). Before the crucifixion, their approach had been receiving from the Master. Following Jesus’ ascension, healing, teaching, and preaching became the apostles’ activity—they were called upon to give.

Jesus discussed the distinction between getting and giving on several occasions. He gave his apostles this assignment: “Go ye into all the world, and preach the gospel to every creature” (Mark 16:15). And he admonished them elsewhere: “Heal the sick, cleanse the lepers, raise the dead, cast out devils: freely ye have received, freely give” (Matthew 10:8).

Mary Baker Eddy repeats this direction in Science and Health with Key to the Scriptures when she states, “It is possible,—yea, it is the duty and privilege of every child, man, and woman,—to follow in some degree the example of the Master by the demonstration of Truth and Life, of health and holiness” (p. 37).

So many accounts of how individuals and families became Christian Scientists begin when a healing is dearly sought and received through prayer and reading the Bible and Science and Health. As in Jesus’ day, people still come to the Christ, the message from God to humanity that is the promised Comforter, for healing. Getting healing, inspiration, and understanding is a good starting point. Near the beginning of the chapter titled “Prayer,” the first chapter in Science and Health, Mrs. Eddy states: “Desire is prayer; and no loss can occur from trusting God with our desires, that they may be moulded and exalted before they take form in words and in deeds” (p. 1).

Praying to spiritualize and exalt our perception of others clearly passes the test of giving.

Desiring to get is the first step, but this sentence concludes with the expectation that words (preaching the gospel) and deeds (healing) will take form as our desires are shaped and become more Christlike. Put another way, our desires are transformed through trust in God from getting to giving. This expectation is reinforced through Mrs. Eddy’s later statement: “The test of all prayer lies in the answer to these questions: Do we love our neighbor better because of this asking? Do we pursue the old selfishness, satisfied with having prayed for something better, though we give no evidence of the sincerity of our requests by living consistently with our prayer?” (Science and Health, p. 9). In other words, is the outcome of our prayer an expression of love (giving), or getting for ourselves?

In Christian Science practice, praying to spiritualize and exalt our perception of others clearly passes the test of giving. Praying for our own healing can meet this demand, as well, because in being healed we demonstrate for all the continuing presence of the Christ, destroying error.

When I was 19 years old and nearing graduation from Sunday School, I gained an interesting perspective on this question. My teacher asked the class, “Do we go to church to listen or to work?” My initial answer was that we go to work. The following year in church, while all were standing for the closing, a woman in front of me fainted. Following the admonition to work, I quickly asserted in my thought that this fellow attendee couldn’t be separated from the love and support of God. She revived and was completely fine. After the service, one of the Readers told me I had really handled the situation well. I took this as an acknowledgment that active prayer had contributed to the service.

Some years later, I was healed of grief while sitting in church. This cloud had overshadowed me for more than two years, but it dispersed during one service.

Over time, my answer to my Sunday School teacher’s question became that we go to church both to listen and to work, to get and to give. In church we pray actively for the congregation, and this prayer extends beyond the specific moments devoted to silent prayer and the Lord’s Prayer. We trust God with our desires and follow through with healing, a clear expression of our love for our neighbor.

As we seek in our prayers to get holy direction and to give it through inspired words and actions, blessings flow not only to us, but also to our church and our world. 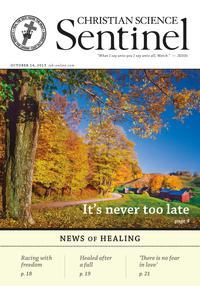