Out of the darkness of addiction

This article is adapted from a Sentinel “News of Healing” podcast, “… and the darkness did not overcome it,” on JSH-Online.com. It was also published as a Web Original on July 7, 2014.

On and off, for over 18 years, I struggled with addictions to alcohol, marijuana, cigarettes, crack cocaine, and cocaine used intravenously. Drugs were my solution for everything. For every kind of feeling, whether I was happy or sad, I would take something. It was a back-and-forth kind of thing—I would stop for a while, then start back up again. In addition, I was diagnosed with bipolar disorder and was continually in and out of treatment centers.

One morning I was standing in my kitchen; I had been awake for about seven days. The sun was coming up, and I thought to myself, “You’re doing it again. How long are you going to keep doing this?” I was in a state of emptiness and hopelessness such as I’d never felt before. I had alienated myself from my family and all my friends, so I was isolated. I was at the place where it was very dark, I was lost, and I wanted to come home but didn’t know how.

In that state—I like to call it the gift of desperation—the thought came to me, “I can pray.” I went back into my bedroom, got down on my knees, and said, “If there is a God, please help me. I don’t know any way out, and I am placing the entire outcome of this situation in Your hands.” I completely surrendered to God for the very first time in my life.

Shortly after that I got picked up by police, and they took me to jail. Then I slowly began to realize that my prayers were being answered. Even though I was in jail, I had been placed in a position of safety, and it became clear that something good was at work in my life. In previous years, I’d had a prosperous business, a home, and all the material things that went with my idea of success. Now I had lost everything, but it was at this point that I realized the only thing there ever was to depend on was God.

While I was in jail, they did many medical tests on me and found that I had hepatitis C from sharing needles intravenously. That really scared me. Having been raised in Christian Science, I decided to call my Aunt Phyllis, who is a Christian Scientist. She had been keeping in touch with me while I was in jail, and I remember her saying, “God did not give hepatitis to you, so you do not have it.” I came away from that conversation with the very clear thought, “God is my Maker, and this image that I seem to have made of myself can’t be true.” Gradually I began to see that my real nature was spiritual. As time went on, I was moved to another jail and was given the same in-depth series of medical tests, and they showed no evidence of hepatitis C.

Also during my stay, psychiatric doctors visited me, and they said that when I’d been taken in, I had mentioned that I was on bipolar medication. I vividly remember that conversation because they’d asked me if I wanted to get back on the medication, and I’d told them I no longer considered drugs a solution for whatever mental problem I had. After that, any belief about being bipolar or manic-depressive totally vanished. I completely forgot about it.

When I got out of jail, I was moving from place to place and was having some trouble with my personal relationships. I would call a good friend of mine whenever something came up, and I remember him gently saying to me, “Jeff, if your success in life had anything to do with other people, and other people could actually prevent you from succeeding, there would not be a chance for success or hope.” He added, “Your troubles probably have very much to do with the way you are perceiving and thinking about things.”

At first I balked a bit and wondered, “How could that be?” But I also began to see the hopelessness of trying to control my surroundings. My friend would gently bring me back to that every time I talked to him, and I began to see that the problem wasn’t the things in my life; it wasn’t the people; it wasn’t my surroundings. It really was the way I was perceiving them. I saw that my fear, anger, and guilt were causing me to react negatively. Self-delusion, self-seeking, self-pity—that whole self thing was going on, but for the first time I could actually see it.

Gradually I began to see that my real nature was spiritual.

This reminds me of a statement Mary Baker Eddy makes in Science and Health with Key to the Scriptures: “When false human beliefs learn even a little of their own falsity, they begin to disappear. A knowledge of error and of its operations must precede that understanding of Truth which destroys error, until the entire mortal, material error finally disappears, and the eternal verity, man created by and of Spirit, is understood and recognized as the true likeness of his Maker” (p. 252).

Now that I was able to see the error of my ways, I could begin making corrections. Also, I was on my knees every morning, continuing to place my life and the outcome of my day in God’s hands. In thought, I was doing that almost every moment. There was a line from the Bible that came to me often, “Not my will, but thine, be done” (Luke 22:42). That was a constant prayer for me, and it had tremendous results.

I remember one morning in particular when I was standing outside a breakfast diner, thinking about God. I had a moment of what you could call enlightenment, and suddenly my eyesight got brighter. Never before had I seen things in that brightness, and it never went away. To this day I am still seeing that clearly. Then, four days later, I was talking with a friend about helping others, and all of a sudden a very clear thought came to me: “It’s all true.”

In that moment, every doubt, every suspicion, every skepticism I’d ever had about God just vanished. It was as if somebody had lifted the curtain. All in one moment, I realized that life was not a dead end, and my real purpose was to be of service to God and to mankind. I’ll never forget it, because from that day forward, I began to feel this love in my heart for mankind, and that began the real healing of drug addiction.

On another day, I went to an automotive store and noticed some socket wrenches. In the past, I had used socket wrenches as drug paraphernalia and had shoplifted a bunch of those from that store. The memory of using them that way brought back to me the craving for drugs. But then the thought came, “I should probably pay for the sockets I stole.” And in spite of the fear of possible consequences, I paid for them right then and there. I’ve never had another drug craving since then.

One day I called my Aunt Phyllis to talk about prayer and the things that were going on with me, and we decided to meet for lunch. During our visit, she said, “I brought something for you,” and she handed me a copy of Science and Health that had belonged to my grandmother. It was a very emotional moment. I knew that was the solution—I knew that’s what I had come there for that day. I went home and got really quiet and flipped it open, and the first thing my eyes fell upon was a line on page 4, “The habitual struggle to be always good is unceasing prayer.” That really resonated with me because it confirmed that everything I was doing—my efforts to change my ways—was really unceasing prayer.

I remember feeling that I wanted to share my experience with everybody. I just couldn’t help myself—I was on fire. I heard comments from people, “Oh, there’s that guy again. He’s going to start talking about God.” And people started showing up to be helped—people who had known me before and seen such a profound change in me.

All I wanted to do was learn more about God and be of maximum service to God and mankind. So I immediately started looking around for a Christian Science teacher, and I eventually took Christian Science class instruction. It was 12 days of solid learning, and it fed me in such a way that when I got out of class, all I could think about was healing and being in the practice of Christian Science.

One day almost a year after I had taken class, I felt moved to drive up a road where I used to purchase drugs. I was thinking about the past and also seeing where I was currently. I thought again about that passage I mentioned earlier, “The habitual struggle to be always good ….” That sentence really had come to fruition for me, and I realized that I always was good—that my every struggle to be good was the expression of the fact that I was “always good.” Like Paul in the Bible, once I saw who I truly was in my spiritual identity, I was completely transformed, and any flood of memories that would try to come back and tell me I had a history of drug addiction had no power over me anymore.

The whole pile of human mockeries—bipolar disorder, drug and alcohol addiction, hepatitis C, even cigarette smoking—is all gone. I can clearly see now that behind every person and situation there is this wonderful, divine intelligence. There is really only one thing going on at all times, and that is God! That is Christ!

Now I am in the full-time practice of Christian Science, I am happily married, my wife has two children, and in the past couple of years we’ve had two more. I can hardly imagine having lived any other way. You know, God will always meet you right where you are. Whatever you’ve done, God will meet you and walk with you every step of the way. He promises that in the Bible, and there are many promises of His love, care, and guidance in Science and Health as well. “With God all things are possible” (Matthew 19:26).

Jeff Rice is a Christian Science practitioner who lives in Frankford, Delaware. 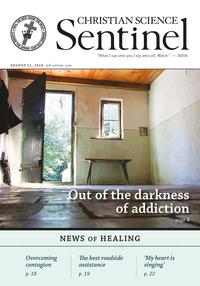