The Bible contains many comforting statements that reveal God's ever-presence and His ability to comfort, guide, and protect us. These statements, understood in the light of Christian Science, can...

Overcoming fear—the first step on the road to healing

On this edition of Sentinel Watch, our guest helps us understand how our God-given dominion defeats fear and contagion.  And she shows us how to listen to the “still small voice” of... 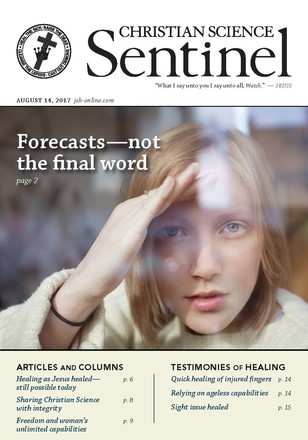 The powerful place of prayer

Relying on ageless capabilities in a chamber music performance

A lesson on UN peacekeeping—from Haiti

By The Monitor’s Editorial Board | August 2017

A fresh look at possibilities for good