The author of Proverbs likens the unwarranted curse to the aimless flight of birds. He says (26:2 ), "As the bird by wandering, as the swallow by flying, so the curse causeless shall not come." The protection of all that has its source in God is demonstrable through Christian Science, and any attempt of the carnal mind to interfere with this protection can be proved futile and powerless. Blessing, not cursing, awaits all righteousness.

Christ Jesus was teaching the basis for the metaphysical protection of one suffering from groundless imprecation when he admonished his followers (Matt. 5: 44, 45 ), "Love your enemies, bless them that curse you, do good to them that hate you ... that ye may be the children of your Father which is in heaven."

Mary Baker Eddy says in "Science and Health with Key to the Scriptures" (p. 517 ), "Divine Love blesses its own ideas, and causes them to multiply,—to manifest His power." Here is a statement of spiritual fact which may be utilized as a law of protection if error claims to curse good either by deliberate intention or by ignorant belief. The curse of evil would diminish our good and make our right motives fruitless. But evil must find something evil upon which to prey if it is to claim any effectiveness whatever. "The curse causeless" is nullified by the scientific truth that God alone motivates man and that there is no evil in man upon which a curse may rest.

In blessing His creation, God gives His universe beauty, perfection, order, and indestructibility, and He causes it to unfold in infinite multiplication of these qualities, in blessing His man, God gives him health and joy, love and ability, controls him justly through His law, makes him powerful in dominion, sinless in purpose, deathless in continuity of existence.

By the law of opposites the suppositional carnal, or mortal, mind would reverse the order of divine Mind. It would curse its own creation, deny good to its offspring, govern them unjustly, multiply their sorrows, upset their bodies, diminish their days, and urge them on to degrading sin and inevitable death. But the Science of being, Christian Science, rejects this concept of mind and man on the basis that it contradicts spiritual facts and so is delusive and unreal.

Mrs. Eddy asks in "Christian Healing" (p. 9 ): "Is it a duty for any one to believe that 'the curse causeless cannot come'? Then it is a higher duty to know that God never cursed man, His own image and likeness." Since the Father of all does not curse His offspring, no evil, hypnotic force can pretend to do so. But one must identify himself as Spirit's image and likeness, its unmolestable expression, if he is to maintain immunity from the curse of suppositional evil mind.

The destructive thinking of misguided mortals, wandering in a mist of envy and self-deception, declaring, or even believing, that dedicated Christian Scientists cannot prove the marvelous truths they willingly accept, is nothing less than a curse that must be detected and denied if the healing power of Truth is to be demonstrated spontaneously. God is the only healer, and there is no limit to the might of His Word. To know this blesses the healing efforts of everyone and helps to make divine power available to all.

The protection of the practice of Christian Science demands far more than effective state laws. Incredulity fostered by materialistic methods of religion and medicine would affect the success of the Scientist if he is not persistent in denying its influence. Negative thinking about the healing power of Christian Science would act as a curse on his efforts and thus belittle his ability and lessen the effectiveness of his treatments if he is not thorough in his realization that his consciousness is fully governed by Christian Science, the universal law of God. To neglect such protective measures is a grievous omission which should be corrected.

Mrs. Eddy says (The First Church of Christ, Scientist, and Miscellany, p. 364 ), "Animal magnetism, hypnotism, etc., are disarmed by the practitioner who excludes from his own consciousness, and that of his patients, all sense of the realism of any other cause or effect save that which cometh from God."

The Scientist not only guards his individual mental household from the curse of materialism but also the Church, which his Leader, Mrs. Eddy, established to free the human race from the imposition of mortality. This Church, The First Church of Christ, Scientist, in Boston, Massachusetts, and its branches, is dedicated to the task of blessing mankind: healing them, purifying them, awakening them to the presence of God's kingdom and His governing law. This Church, founded on the Rock, Christ, fulfills the promise given by the master Christian (Matt. 16:18 ), "The gates of hell shall not prevail against it."

Members of The Mother Church should know daily that to it " 'the curse causeless cannot come.' " God is blessing the institution that protects, disseminates, and perpetuates the Science of Christianity, which Jesus practiced and which has come to the world in an age of vast scientific development. God is the only cause, and His will is to bless all that conforms to His glorious purpose and to multiply power to those who love and obey His Word. 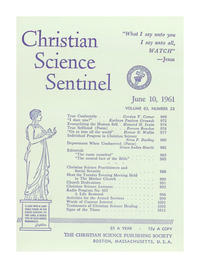