“God with us” all

If the worldwide challenges confronting us today loom large, that need not stop us from thinking clearly, fearlessly, spiritually, in the face of them.

This article was originally published online on February 24, 2022.

That we pray about challenges, including war, truly matters.

A powerful story of a war between two nations being halted holds compelling lessons for these times. In this story, from the Bible’s book of Second Kings, we are shown that everyone—both oppressors and oppressed—was surrounded by God’s “horses and chariots of fire” (see 6:8–23). This spiritual revelation, made known by the prophet Elisha, was an assurance of deliverance for all, because he had seen this very means bring deliverance before (see II Kings 2:12).

In the New Testament, deliverance, through acknowledging life in and of God, was no more powerfully demonstrated than by Christ Jesus. His undeviating recognition that all real being is found in God, included the corollary fact that whatever is unlike God’s infinite goodness could not actually be the reality it claims to be. Jesus proved God’s control under the severest of circumstances, dispelling any notion that some situation could halt the supremacy of God, divine Love. His understanding of God destroyed error, the belief that Love does not hold the control. He saw this error not as a reality, or even as some lesser, temporary power, but as a deception wrongly believed.

Had evil and matter been the reality they claimed to be, Jesus could not have walked safely through crowds bent on his destruction, fed and healed multitudes, or raised the dead, including rising from his own tomb.

Countless people have proved these spiritual concepts as well—both modestly and in more dramatic ways—including the Discoverer of Christian Science, Mary Baker Eddy. She wrote, “No evidence before the material senses can close my eyes to the scientific proof that God, good, is supreme” (Miscellaneous Writings 1883–1896, p. 277).

A mirage on a road disappears because it is an illusion, never for a moment real. So, too, a change in thought from fear to holy inspiration reveals any material picture not to have been the substance it claimed to be. The “size” of a mirage, obviously, is as unreal as its claim to reality.

This has everything to do with how we pray effectively about global challenges. Without boldly, spiritually confronting the mesmerism of war, it would claim to successfully deceive us. So we insist that our thinking not be invaded by any sense of helplessness, futility, or defeat. This kind of warfare—mentally destroying every claim that dares to oppose the knowledge and allness of God—is the only means of overcoming conflict and war. That this approach is effective has already been proved. Our need, then, is to utilize this mightiest of means to save all.

How we pray about global challenges, including war, truly matters.

If the worldwide challenges confronting us today loom large, that need not stop us from thinking clearly, fearlessly, spiritually, in the face of them. This was borne out in the experience of a young friend of mine. He lives in a country that was invaded by a neighboring country a few years ago. There were periods when, for weeks on end, the reprieve from the bombing was no more than three or four hours. During the day my friend read all the books he could, seeking answers to life’s meaning. When darkness fell, he filled the time thinking deeply about the ideas he’d been reading. After weeks of such living, one day he managed to send an email off to me in which he wrote, “If you have faith, can you at the same time shake with fear at this madness? I mean that I must literally trust myself to God. I do not presume to convince anyone of this. But with this thought I’ve begun to live.”

The destruction all around my friend was so extreme that a mortal, material sense of life began to lose its meaning. As must always be the case, the greater any discord seems to become, rather than actually becoming more real, it begins to lose its legitimacy. In the midst of all the destruction, when my friend felt an irrepressible sense of life, he knew that what he was feeling could only be of God.

When a ceasefire was finally declared, my friend went the very next day to the public library, where he worked, to help clean up the debris. In less than an hour people came in not only to help, but to check out books!

In all ages, people have experienced the certainty that nothing could separate them from God, Love, Life. And because they couldn’t be kept from feeling God’s presence, they began to accept the inability of evil to control their lives. Along this line, I recently heard a testimony shared at a Wednesday evening testimony meeting (held each week by Christian Science churches in-person and sometimes online) of a man whose conviction of God’s realness grew, rather than diminished, throughout the period he served in a war zone.

It was Christ, the heaven-sent message of truth and love, assuring me of divine Love’s presence and power.

In my current experiences with friends living in war zones, numerous times I’ve been turned away from a sense of hopelessness to the certainty of God’s control over all. That turning was nothing I could muster. It was Christ, the heaven-sent message of truth and love, assuring me of Love’s presence and power. Not surprisingly, these friends later have told me of unexpected supply, safety, new opportunity, and even times of joy.

It is comforting to know that we are turned to feel our oneness with God. I say we “are turned” because we don’t turn ourselves, but are lifted up by the ever-presence of Love’s saving power. Like the biblical prophets, we can know God’s deliverance for all. God is the same here and now, wherever we are, whatever we face. “God with us” all, is the only God there is. 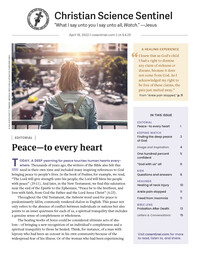