My soul thirsteth for God, for the living God.

Behold, the Lord our God hath shewed us his glory and his greatness, and we have heard his voice out of the midst of the fire: we have seen this day that God doth talk with man, and he liveth.

Forty years after receiving the Ten Commandments on Mount Horeb (see Exodus, chap. 20), Moses teaches a new generation of Israelites about the covenant God had made with their parents. At that earlier time, the people witnessed thunder, lightning, and smoke from the mountain (see v. 18). Although none of their words are recorded in the Exodus account, Moses now quotes their response at seeing God’s glory—their testimony “that God doth talk with man, and he liveth.”

And Moses said unto God, Behold, when I come unto the children of Israel, and shall say unto them, The God of your fathers hath sent me unto you; and they shall say to me, What is his name? what shall I say unto them? And God said unto Moses, I AM THAT I AM.

By this time, the Hebrew people had lived in Egypt for over four hundred years, and had been slaves for many generations. Moses voices several reservations about his ability to carry out God’s charge to liberate them. In addition to not knowing God’s name, he isn’t sure he’s the right person; he doesn’t expect to be believed; he doesn’t have the ability to speak well; and he needs a companion in the work. God answers all of these concerns (see 3:10, 11; 4:1–17)—much as He later reassures Gideon and Jeremiah (see Judges 6:11–16; Jeremiah 1:4–10).

God’s revealing of His name unequivocally expresses His eternal, unchangeable, self-existent nature. One scholar writes, “The famous declaration signifies that God is known in his dynamic confrontation of man and in man’s active response to God.”

God led the people about, through the way of the wilderness of the Red sea.

Although the exact route of the Exodus isn’t known, the biblical account tells that Moses led the people on a circuitous route to Canaan—foregoing the more direct “Way of the Sea,” an international trade route running through the northern part of the Sinai peninsula near Philistine country. Scholars identify two reasons for this: first, to protect the people from encountering armed resistance; second, to make Pharaoh think of them as easy prey, trapped in the desert. The second reason resulted in the Egyptians’ pursuit and God’s decisive victory over them at the Red Sea.

The location of the Red Sea crossing is also unknown today, but many scholars identify the sea itself as an inlet of the Indian Ocean south of the Gulf of Suez. Its name may come from the Hebrew word for reed or water plant (sûp), so it is also called “Reed Sea.”

Thou shalt remember all the way which the Lord thy God led thee these forty years in the wilderness, to humble thee, and to prove thee, to know what was in thine heart, whether thou wouldest keep his commandments, or no.

Moses’ words are a vivid reminder to the Israelites that it was God who guided and sustained them—and that His divine intention was to test their willingness to honor Him.

The Exodus tradition—the retelling of the story—continues throughout Scripture (see other examples in Joshua 24:1–8; Psalms 78:12–16; Acts 7:30–36). One commentary notes, “The exodus remains one of the most powerful narratives of divine compassion and liberation found in the Bible.”

The law was given by Moses, but grace and truth came by Jesus Christ.

The writer of Hebrews continues the comparison between Christ Jesus and Moses: “Moses was certainly faithful in God’s house as a servant.… But Christ, as the Son, is in charge of God’s entire house” (3:5, 6, New Living Translation).

“With the coming of Jesus,” explains one source, “we no longer seek to obey the law of God like slaves; we seek to answer the love of God like sons.”

References to “the law and the prophets” appear several times in the New Testament to describe sacred Old Testament writings. Here Jesus is assuring his listeners that neither the Mosaic law (the Torah or Pentateuch) nor the writings of the prophets are at risk of loss or misinterpretation, but are to be confirmed and demonstrated through his life and teachings.

Jesus went unto the mount of Olives. And early in the morning he came again into the temple, and all the people came unto him; and he sat down, and taught them.

Also known as Olivet, the Mount of Olives is a series of peaks on the east side of Jerusalem. From Old Testament times, it figures as a place of prayer, refuge, and revelation. It’s the site where David fled from Absalom; where Ezekiel beheld God’s glory; and where Zechariah’s prophecy of God’s defense of Jerusalem would take place (see II Samuel 15:30; Ezekiel 11:22, 23; Zechariah 14:4). 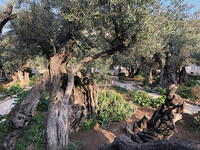 Ancient olive tree on the Mount of Olives

In the New Testament, Jesus prophesied on this mount about the times to come (see Matthew, chaps. 24, 25). The Master spent his last night before the crucifixion there—in the garden of Gethsemane, on its western slope. And it was at Bethany, on the southeastern slope, that the disciples received Jesus’ final blessing and witnessed his ascension (see Luke 24:50, 51 and Acts 1:9–12).

Olive trees still grow on the Mount. Although they aren’t original to the time of Jesus, tests have shown them to be hundreds of years old—and some believe that their roots may date to Bible times.

Moses truly said unto the fathers, A prophet shall the Lord your God raise up unto you of your brethren, like unto me; him shall ye hear in all things whatsoever he shall say unto you.

Following the healing of the lame man at the Temple gate, Peter expounds on Jesus’ unparalleled role in the salvation of mankind. He describes the Master as God’s Son, “the Holy One and the Just,” and “the Prince of life” (vv. 13–15). Then he identifies Christ Jesus as the prophet predicted by Moses in Deuteronomy 18:15.

We know that the Son of God is come, and hath given us an understanding, that we may know him that is true, and we are in him that is true, even in his Son Jesus Christ. This is the true God, and eternal life.

The phrase “everlasting life” occurs only once in the Hebrew Bible, in Daniel 12:2. But the concept is central to Christian teachings. Both the Gospel of John and First John refer to eternal life repeatedly, linking it to Christ Jesus as the Son of God. In one instance, Jesus declares his role as God’s agent in making eternal life accessible: “This is the will of him that sent me, that every one which seeth the Son, and believeth on him, may have everlasting life” (John 6:40). 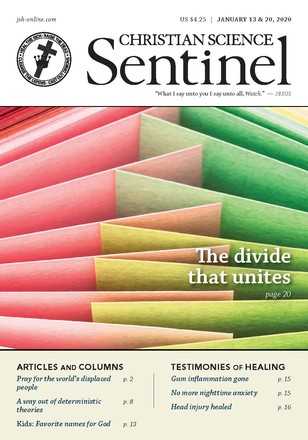 Know what you are

What’s your favorite name for God?

By a young class at the Christian Science Society of Stevens Point, Wisconsin | January 2020