When I first learned of Christian Science, I was searching for healing, as I had been ill for 14 years with a physical condition that the doctors could not diagnose or cure. During a radio broadcast of The Herald of Christian Science I heard about a book called Science and Health with Key to the Scriptures by Mary Baker Eddy, and I listened to testimonies from those who were healed mentally and physically by reading Science and Health. Even the doctor I had consulted about my illness had mentioned the book.

I got my own copy of Science and Health, and at the end of the Preface I read these words regarding the author: “... she commits these pages to honest seekers for Truth” (p. xii). I was one of these seekers. I continued reading the book on and off for about four months, and by the time I finished, the symptoms of illness had vanished. I was no longer suffering.

My family felt I had found something precious in Christian Science. And I thought, If I can be healed of the illness, why not of the premonitions?

You see, I thought I had been born with the ability to foresee events in the family. Having attended a missionary school in Cameroon as a young girl, I was familiar with the Bible, and since childhood had pondered this passage in Amos: “The Sovereign Lord never does anything without revealing his plan to his servants, the prophets” (3:7, Good News Translation). This verse has been significant to me, because at about six years old I began to get these premonitions. I thought this was the way God was revealing His plan to me. I’d sometimes hear voices telling me that something was going to happen—usually something bad—and then it would happen.

At first, I was afraid of the premonitions. When I was ten, my father took me to a witch doctor to cure me of them. They vanished for a while, but then returned while I was in middle school.

As I grew older, I began to think it was good to have this ability to foresee the future. But my encounter with Christian Science in adulthood changed that, and I began to see things differently, meaning from a spiritual standpoint. I saw that God is Love, only Love, and that He does not know evil or send evil, or bad events, to His children.

My eyes were also opened to the distinction between mortal mind-reading and immortal Mind-reading, which are opposites. The Christian Science textbook says: “The latter is a revelation of divine purpose through spiritual understanding, by which man gains the divine Principle and explanation of all things.… The act of reading mortal mind investigates and touches only human beliefs” (Science and Health, p. 83). I realized that only as we listen to, and are guided by, the immortal, divine Mind—or God—and not mortal belief, can we discern His goodness, or “plan” for us.

But at the heart of the healing of the premonitions was understanding that God, good, is the only reality, and that evil is not a reality. Reading Science and Health unfolded to me the nature of God as not only Love and Mind but also Spirit, and I saw that Spirit is the only communicator to man. I came to understand that premonitions of evil are not from divine Spirit, and therefore, they have no power or authority over anyone. So I did not have to be afraid of them or feel helpless to do anything about them. When I felt that something was not right, and that a family member or someone else was ill or in a bad situation, I could pray to know that God is the only power and presence, and that the individual was safe.

For instance, one day while cooking at home, I suddenly had the feeling that my daughter was in danger. At first I neglected the feeling, but as it persisted and became so strong that tears appeared in my eyes, I knew I had to pray. The Lord’s Prayer came to my thought, and this particular petition touched me: “Lead us not into temptation, but deliver us from evil” (Matthew 6:13).

I began refuting the whole picture of evil that was being presented to me. I knew I could not be tempted to believe that it had any existence or power. I insisted that it was not possible for my daughter to be in a dangerous situation, for all that God created is good; there is no evil in His creation. Divine Love is everywhere, encompassing all of God’s children and protecting them, including my daughter.

After praying awhile, I felt at peace.

Two weeks later, I traveled from my village to Yaoundé, the political capital of Cameroon, to visit my daughter, and she told me that a strange thing had happened to her at the exact time I had felt she was in danger.

She said she went to another quarter of the city to visit her uncle and took a taxi. When the taxi set off in the wrong direction, she discovered it belonged to bandits who kill people and sell human organs for profit. They told her she wouldn’t get out of the taxi alive, and she was very afraid. She prayed to God to rescue her. Suddenly she got the idea that she should jump out the window of the moving taxi. Somehow, she found a way to do this, and was able to run to safety with nothing more than a few scrapes.

That was how my daughter was saved. We thanked God for His protection.

This experience taught me how vigilant we have to be when faced with the suggestion that evil is real and that we can be its victim. Thanks to Mrs. Eddy’s discovery of Christian Science, every one of us has the spiritual tools to successfully handle this suggestion and prove that “God is infinite, all-power, all Life, Truth, Love, over all, and All” (Science and Health, p. 17).

Unerring direction from God—whether or not we ask

It seems everywhere we look—from individuals needing to make decisions to governments facing quandaries—people are looking for answers as to what direction to take or hoping to find a solution that...

A right understanding of God heals

Assurances of God’s goodness and everlasting love for His creation can be read throughout the Bible. Yet it is not unusual for the average Bible reader to believe God is capable of both good and ev...

No one wants to lose control over themselves. But to maintain proper self-government, individuals need to be sure they don’t give in to any influence that would take away their individual integrity... 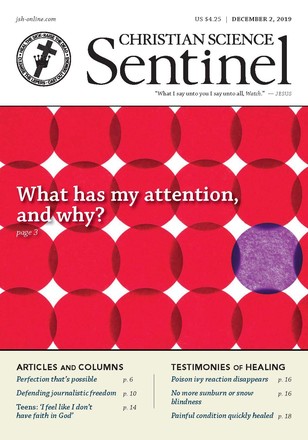 What has my attention, and why?

Place, purpose, and opportunity for all

From ‘the liberal’ and ‘the conservative’ to friends

By The Christian Science Board of Directors | December 2019