Unselfishness: A recipe for time management

I was feeling utterly defeated and dejected. In addition to a full-time job, I had a business of my own to manage and errands to run. My wife and I had also recently purchased a home that needed some renovation, and we had a plethora of projects ahead of us. I felt absolutely swamped.

An ardent and meticulous planner, I had tried over and over again to manage my schedule. But no matter how brilliant I thought my plan for each day was, I almost always failed to achieve what I set out to accomplish.

I realized that outside help was needed, so I called a Christian Science practitioner, someone available full time to help people through prayer, and explained the situation. The practitioner offered many helpful ideas that reminded me of the value of humbly turning to God for guidance.

So the next morning I started by quietly reaching out to God in prayer, just listening for inspiration for the day. Like a bolt of lightning, it became clear to me that I had just one task: to express unselfishness, to dedicate my entire day to blessing and serving others.

It was the exact opposite of how I had been living. While the tasks I had been doing weren’t bad in and of themselves, my whole sense of time management and the need to accomplish all of my goals had been based on self-centeredness. I wanted to get everything done because it would make me feel good about myself.

With this insight, it felt as if an enormous weight of busyness was being lifted off my shoulders. I no longer felt the obsessive need to accomplish everything on my to-do list. Instead, my priority became to devote my thought and attention to God and to others around me.

It became clear to me that I had just one task: to express unselfishness.

This was not just a mental exercise, but a true spiritualization of my consciousness—a powerful shift in thought we can all experience as we let God, divine Love, lead us. I felt palpably the oneness of God’s universe and saw that all of us, God’s spiritual offspring, are included in that oneness.

From my study of Christian Science, I realized that what I was feeling was the Christ in action, the tender and ever-present message of divine Love embracing everyone. Science and Health with Key to the Scriptures by Mary Baker Eddy, the Discoverer of Christian Science, sums up the power of this universal message this way: “Fixing your gaze on the realities supernal, you will rise to the spiritual consciousness of being, even as the bird which has burst from the egg and preens its wings for a skyward flight” (p. 261).

Just like a newborn hatchling, I felt as if I had broken through a shell of selfishness and was glimpsing “the wide horizon’s grander view,” as a phrase in the Christian Science Hymnal puts it (Samuel Longfellow, No. 218). This “grander view” includes our true nature, not as self-focused mortals but as the spiritual expression of God’s universal love.

It felt as if an enormous weight of busyness was being lifted off my shoulders.

As this shift in my thinking took place that morning, I began to discern beautiful “angel” messages, or inspiration, from God that gently guided me in the right direction for the day. I also felt a renewed energy and sense of purpose that benefited my interactions at work and enabled me to help others, including a homeless individual in need of food. And ultimately, important things that required my attention got taken care of, while I felt uplifted rather than stressed. This uplifted feeling and the lesson I learned have stuck with me since that day.

True unselfishness is so much more than the act of sharing one’s possessions (as noble as that can be), and we can express it consistently. It is a state of consciousness in which we feel God’s love for all creation and realize our fundamental role to express that love outwardly toward others. We all have it in us, as God’s children, to discern this spiritual reality, the “pearl of great price” Jesus referred to (Matthew 13:46). And this spiritual discernment of reality just so happens to be a perfect recipe for time management. 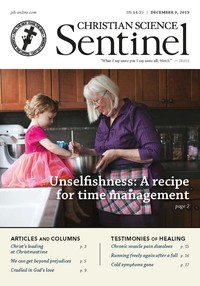