My family has been experiencing the benefits of Christian Science for generations. I would like to share a few healings from our family history that have been particularly inspiring.

My mother, who lived to be 103, studied the Christian Science Bible Lessons and prayed daily. One day, while preparing to deep-fry potatoes, she tipped smoking-hot fat over the back of her hand, from the wrist to the tips of all her fingers. The pain was so intense she asked for prayerful help from a Christian Science practitioner. Within minutes of the call, the pain was completely gone and never returned. She bathed that night and was able to put her hand in the water without discomfort. Later she showed me the extent of the burn by removing a white glove she used to hide it from view. Underneath was blackened skin. When this fell off naturally, the new skin beneath was unscarred and perfect. You could not tell which hand had been burned, as they were identical.

My sister Barbara experienced many healings through her study of Christian Science. Once she was very ill with what appeared to be a liver problem. She had yellow skin, could not eat, and lost weight over a long period. Many voiced their concern for her survival. When she was confined to her bed, too weak and dizzy to get up, my wife stayed with her and rang Barbara’s Christian Science practitioner, who came immediately from 40 miles away to see her. He talked with her for about an hour, and as my sister told me later, he spent much of that time allaying her fears with many statements from the Bible and Science and Health with Key to the Scriptures, by Mary Baker Eddy. As he left, Barbara got up from her bed, dressed herself, and was well immediately, walking about and engaging in normal activities. She soon regained her usual weight and was never troubled again with that disease.

As a child, I easily accepted the concept that healing came through prayer. My first memory was the overcoming of fear and shyness about reading aloud in Sunday School. My teacher offered to pray for me, and the next Sunday I was keen to read, not shy at all. It seemed quite natural to me to read, and I was able to do it easily.

At the age of 20, I was on a farm doing long hours of manual labor. Quite suddenly I developed heart problems and was unable to exert myself even slightly without being short of breath and suffering palpitations. When I was called up for military service, a full medical examination was required. Heart problems were detected and arrangements were made for hospital tests. These revealed a birth defect. The heart specialist advised that for the rest of my life I should take things quietly and rest whenever I felt tired.

This was a shock, so straight from the consultation, I called on my former Sunday School teacher, who was now a Christian Science practitioner. We talked about man being the image and likeness of God and therefore not material but spiritual, and as perfect as God. We also studied Mrs. Eddy’s answer to the question “What is man?” on page 475 of Science and Health. By the time I left the practitioner’s house, I was free of symptoms, and have remained free from that day to this.

Not long after that healing, my wife and I bought our own 60-acre farm, and I worked longer and harder than I had ever worked before without the least vestige of a heart problem.

When my wife, Gillean, was diagnosed with a malignant brain tumor and given a bad prognosis, she opted for surgery. Though she made a rapid recovery from the operation, the problem recurred as predicted in other parts of her body, and she had another operation. She was told by three specialists—bone, medical, and surgical—that she could expect to live for perhaps only two more years. Then she decided to leave all medical help and rely completely on Christian Science treatment. Many challenges came up with this condition, and all were dealt with through prayer alone. The two years passed into more than 20 years, with no further sign of the problem.

My gratitude for Christian Science is constant and overflowing. 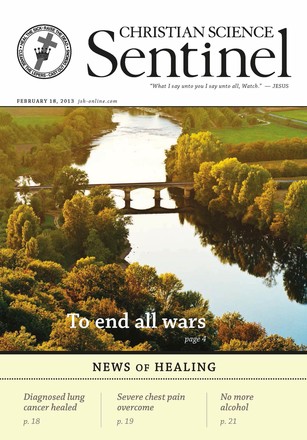 To end all wars

'Mightier than the noise of many waters'

What got me started

By Dorothy Davis with contributions from Tom Davis | February 2013

Build the economy on Truth