Make sure you're trying to please the right boss.

Do you long for the approval of others? Your peers, perhaps? Or your boss? Your parents, children, spouse, boyfriend or girlfriend, or your colleagues at work? I was speaking to a friend recently who told me how eagerly she sought recognition early in her professional life. And when she got it, she wanted more, and still more. It became almost an addiction. And still she was not satisfied. She had to learn to approach her work in a different way.

There was a time when I needed to learn that same lesson. I longed to please my boss. He was a good friend, a brilliant man of wide knowledge and experience. He headed a small, specialized division of a large government department, and was exacting in what he demanded of his employees.

My work included writing letters and reports that would be signed by people at different levels of government—from my boss, to the department head, right up to the cabinet. Subtle differences of tone were needed according to who would be signing each document. And I just wasn't getting it. The drafts would come back for amendments again and again until they were finally acceptable. I was getting frustrated and disgusted with myself for not grasping those concepts that would make my work worthy of immediate approval.

One day I was reading the Bible and came across a message that almost jumped off the page: "Study to shew thyself approved unto God, a workman that needeth not to be ashamed, rightly dividing the word of truth" (II Tim. 2:15). Suddenly I realized I'd been trying to please the wrong boss. God's approval was all I needed. But how could I achieve it? How could I rightly divide "the word of truth"?

This "word," God's Word, tells each one of us that we're actually made in the image and likeness of God, divine Spirit. Hence our true, spiritual nature is already thoroughly approved by God. Commenting on the perfection of God's creation, Mary Baker Eddy writes in Science and Health: "Deity was satisfied with His work. How could He be otherwise, since the spiritual creation was the outgrowth, the emanation, of His infinite self-containment and immortal wisdom?" (p. 519) To become more conscious of Deity's approval and express more of His "immortal wisdom," we need to bring our lives into closer conformity with our innate Godlikeness, to express more clearly our true identity. How could I do this in my situation?

The next day at the office, as soon as I got stuck, I put my papers aside and quietly prayed.

First, I could stop believing the common view of man as mortal, limited in intelligence and capability. I could pray instead to realize that God is divine Mind, and that this infinite Mind is actually the only Mind I—or anyone else—could really have. I could also affirm that Mind is ever present, always expressing infinite intelligence, capability, insight, and understanding through its ideas, and that as an idea of Mind, I could never really be separated from these qualities.

The next day at the office, I proceeded as usual with my next project. But as soon as I got stuck, instead of feeling frustrated and lost, I put my papers aside and quietly prayed along the lines indicated above until I felt at peace. Then I went back to my work, trusting that infinite Mind, rather than a limited human intellect, would reveal whatever was needed. There were no sudden revelations, but I gained a quiet sense of how to proceed. Whenever I got stuck, I repeated the process until the work was finished. I kept this up, day after day. Instead of worrying about human approval, I was "study[ing] to shew [myself] approved unto God" by being a better witness to Him, a more active expression of divine Mind.

Two weeks later the assistant to my boss—the one to whom I reported directly—called me into his office. "Your work used to be almost right, but just missing the mark," he said. "But in the last two weeks, you've been right on target every time. What's happened?"

Of course I was deeply grateful for this change and for the approval it brought, even though I couldn't perceive the difference between my present and previous work. The differences were so subtle that I still didn't have an intellectual grasp of them. Yet by following the promptings of divine Mind, instead of wrestling in frustration with an inadequate human intellect, I was able to make the subtle changes that were needed.

This experience taught me that in seeking only God's approval, we find whatever we really need in the way of recognition from others as well. At the same time, the human approval we may think we want but don't actually need loses its importance to us. For as children of God, we can never lack what truly counts—being "approved unto God." 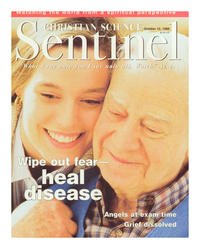