As a rather quiet and independent person, I had always gotten through life’s challenges in my own way using my own resources. I also put great pressure on myself to perform perfectly in different areas of my life. Yet my confidence would be shaken easily by little things that threw me off, such as someone’s tone or something somebody might have said about my work. I was constantly fearful of failure—of looking stupid, saying the wrong thing, and so on.

All of this came to a head recently. I got a great promotion several months ago to manage a team of 13 statisticians that I’d previously been a part of. There had just been a reorganization of the company, and the team had moved into a different department and been given greater responsibilities. The main challenge I faced was finding a way to support the team members and help them achieve their potential while we all adjusted to new ways of working.

I felt ill-equipped in many ways to be the team’s leader. I lacked the confidence needed to be effective and helpful. For example, I needed to be able to network effectively to build relationships outside the team and at a higher corporate level than I was used to—which I had always found really scary. I was self-conscious—frightened of appearing incapable or saying the wrong thing, of being rejected, excluded, or embarrassed and made fun of. I had previously run out of networking events and cocktail parties in tears.

The turning point came after I attended the first part of a leadership course that left me emotionally upset every single day. All those pent-up fears I’d had for years were surfacing during the course as I started to talk about things that had been pushed down by my independent and self-reliant “coping” habits. Fortunately, a long-awaited holiday was due immediately after this, and I knew I could use part of it to take a step back and try to find a solution by turning to Christian Science.

Since starting to attend church regularly a few years ago, I had learned that God is all-powerful, all-knowing, and always there for me. However, I still didn’t feel a true faith that God could work through me and that right would prevail if I would only accept divine Truth and yield to God. I knew I had a choice in front of me—to carry on as before or drop the strong sense of personal responsibility and take a leap forward into a future where I would accept help from God.

I decided to reach out for help from a Christian Science practitioner, with whom I started an email dialogue. At her suggestion, I read the first chapter of Science and Health with Key to the Scriptures by Mary Baker Eddy, “Prayer.” One passage that resonated was this: “Shall we ask the divine Principle of all goodness to do His own work? His work is done, and we have only to avail ourselves of God’s rule in order to receive His blessing, which enables us to work out our own salvation” (p. 3).

The practitioner also helped me realize that I needed to place my confidence in God and His ability, and know that I expressed all the qualities of God, such as goodness, intelligence, and strength. She pointed out that glorifying God is our true purpose in everything we do, and when we’re clear on this, there can be no fear of messing up.

When I returned to work after this, I noticed a huge difference. I could now see myself as a perfect daughter of God, and trust that my Father-Mother God was guiding, comforting, inspiring, protecting, and caring for me. There was no reason to fear or have the slightest belief that I was anything other than the expression of God’s power and strength. It was as though I were a new person—I was now contributing regularly in meetings, asking questions, smiling more, helping the team to a greater degree, being more relaxed, and more!

The extent of the transformation became even more apparent during the second part of the leadership course one week later. The trainer came up to me within the first hour and asked me what had changed—he was seeing a totally different person in the room this time. I explained that I had reached out to a Christian Science practitioner, studied the Bible and Science and Health, read articles in the Sentinel, and taken a time-out to do some metaphysical work. He asked if I would share my story with the rest of the group. I was a bit unsure at first, but after relating the story to a couple of individuals who responded with interest, I agreed to share with the whole group.

This sharing happened on the final day of the course. I told everyone how I had been transformed by Christian Science as I gained an understanding of myself as God’s child, perfect and complete. I also explained that I was beginning to see not just myself but everyone as a child of God, governed by divine Love. I think this story had a transformative effect on others in the circle—a couple of people came to ask questions and tell me how inspired they felt.

I am so grateful to have undergone this healing transformation, and that it’s helped me be a genuinely loving, supportive, and inspirational leader. As Science and Health tells us, “The highest prayer is not one of faith merely; it is demonstration” (p. 16).

Send a comment to the editors
NEXT IN THIS ISSUE
TeenConnect: Trending
Feeling tired? 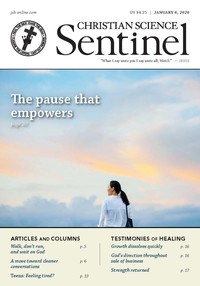