A STORY familiar to all Bible students tells of a severe storm which arose on the Sea of Galilee and threatened the destruction of the boat in which Jesus lay asleep. His disciples, struck by fear, called on their Master to save them, whereupon, as we are told in Mark's Gospel, "he arose, and rebuked the wind, and said unto the sea, Peace, be still. And the wind ceased, and there was a great calm." This manifestation of power was long regarded by many as supernatural, but those who are striving, in the light of Christian Science, to do the works of their Master see in the incident an example which they are bound to endeavor to follow. Surely never in the history of the world has there been greater need than in the present time for the authoritative command, "Peace, be still," that the tumult and tempest of mortal mind may be stilled.

On page 421 of "Science and Health with Key to the Scriptures," Mary Baker Eddy instructs Christian Scientists how to deal with "the mental disturbance" which may occur in their treatment of disease. She writes, in part, "Insist vehemently on the great fact which covers the whole ground, that God, Spirit, is all, and that there is none beside Him." And she adds, "Calm the excitement sometimes induced by chemicalization, which is the alterative effect produced by Truth upon error."

Truth has come to this age with a fullness and clarity never before manifested since the time of Christ Jesus, and it is destroying error as it always destroys what is false, when it is understood and rightly applied. In this work of destroying error, much that was latent in human thought—despotism, malice, dishonesty, hatred, greed, fear, and so forth—has been stirred. The result is that a mental fermentation greater than has previously been experienced by the human race is taking place and threatening to overwhelm the world, even as the waves of the Galilean Sea threatened to overwhelm the frail bark in which were the fearful disciples with their Master. Now, an important part of the work of Christian Scientists is to help "calm the excitement." To do this effectively, certain mental steps have to be taken.

The first step is to dismiss from our own consciousness those thoughts which would add to the excitement. Fear is infectious, indeed mesmeric, and alertness is necessary to prevent oneself from being caught in it and led into consideration of or conversation concerning the possible peril, individual or national. Unnecessary discussion of dangerous conditions is unwise. This does not mean that any seemingly disconcerting news of the day is to be ignored. Evil must be seen through, and it is impossible to see through anything with one's back turned to it; but talking about it or dwelling on it mentally only adds to the prevailing excitement.

The next spiritually mental step is understandingly to deny the existence of any real cause for painful excitement. The destruction of error by Truth is a tranquil, healing, joyous process, and the tranquillity, healing, and joy which Truth brings to the human consciousness belong to all the children of God and can cause them no suffering. The presence of Truth is gentle, bringing "tidings of great joy" to the world.

The next step is to realize that, through Christ, Truth, we have the power and authority to pronounce the blessed words, "Peace, be still," with "signs following"; and if the signs are not universally visible immediately, they can at least be realized in our own consciousness. In reality we dwell where peace and everlasting joy reign. We may lift up our eyes, expecting the promised salvation, remembering the inspired words of our Leader on page 574 of Science and Health, "Note this,—that the very message, or swift-winged thought, which poured forth hatred and torment, brought also the experience which at last lifted the seer to behold the great city, the four equal sides of which were heaven-bestowed and heaven-bestowing."

Mortal mind, with its false beliefs in the pleasures and pains of matter, has not yet fully yielded to Truth, and Mrs. Eddy has explained that certain disturbances "will continue until the end of error, when all discord will be swallowed up in spiritual Truth" (ibid., p. 96). But, knowing that "the end of error" is certain, every Christian Scientist can joyfully sing, in the words of a hymn in the Christian Science Hymnal (No. 136):

All unafraid I wait, the while
Thy angels bring release,
For still Thy presence is with me,
And Thou dost give me peace.

It is the privilege of every Christian Scientist constantly to remember, in his effort to help "calm the excitement" that is convulsing the world, what he has learned through the teachings of Christian Science, namely, the nothingness of all error, such as is apparent in this fermentation—the nothingness that can be understood only in the light of the glorious fact of the allness of God. God is All, so all is good, even when the outward appearance of evil seems real.

"In the beginning God created the heaven and the earth." There is nothing else; for He has never made anything unlike Himself. In the abiding calm of the blessed omnipresence of divine Mind, man lives and moves and has his being, in his degree as perfect as his divine Principle, rejoicing in eternal, indestructible Life, incapable of being or doing anything unlike Love, which he reflects. God is, and there is none else. Most certainly the realization of this fact calms excitement, dispels fear, and eventually will save the world. 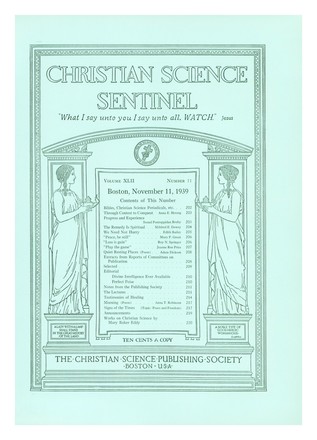 Through Contest to Conquest

The Remedy Is Spiritual

We Need Not Hurry

A Christian Science period in the "Columbia West Coast...

The blessings which the study of Christian Science has...

The blessings of Christian Science may be taken too...

My investigation of Christian Science began shortly before...

I have been a member of The Mother Church and of a...

I should like to give grateful testimony to a healing I...

I am now fourteen years old, and I have been in Christian Science...