I BET EACH OF US can think of specific times in our lives when we really learned to lean on God for protection and guidance like never before. I certainly can. For me, both my time in the US Army Ranger School and my service with the US Army overseas inspired me to climb higher in my study of Christian Science.

When I began my two months of Ranger training, I knew that it would involve extreme physical exertion, skilled preparation, and teamwork, but I had no idea it would push me to grow so much spiritually. As I walked and crawled my way through the mountains and swamps of the East Coast of the United States, carrying supplies on my back during training exercises, I found lots of time to think and pray. This process of learning to be still mentally for extended periods of time proved essential to successfully executing all my required tasks.

Over the course of the training, I became more devoted to listening to and following God's orders for me each day. It became my goal to recognize harmony when I saw it, to better understand that God was the source of all intelligence, and to let my actions follow. Putting this into practice required that I obey Jesus' guidance from his Sermon on the Mount, "Seek ye first the kingdom of God, and his righteousness; and all these things shall be added unto you" (Matt. 6:33). I was constantly praying to bring my thought in line with divine Mind, and to be conscious only of that Mind. In doing this, I learned to put God's guidance ahead of my preconceived plans.

One night, during a particularly challenging patrol, my fellow Rangers and I were feeling pretty beat. I'd been praying to be able to express the spiritual qualities of perseverance and strength. Suddenly, it became clear that strength came straight from God. I couldn't be responsible for creating it myself. It was a simple idea—but very profound. I saw more clearly that my human efforts, as good as they might have been, had to yield to God's will if I wanted to make progress. And in that moment of surrender, I felt perfectly at peace. My 80+ pound rucksack no longer felt like a burden. The nagging hunger I'd been feeling passed, and my exhaustion gave way to a feeling of refreshment.

Because I was alert and composed, I was able to assist our patrol leader, who was struggling with fatigue, and help him complete his portion of the mission. Some of my friends, who were still exhausted, noticed my increased energy, and one asked me about it. I told him that I was just trying to express love. The tasks we had to accomplish before we could get a couple of hours of "down time" were completed quicker than usual, and the training exercise was a success.

I can't say that I was never hungry or tired again. In fact, many days after that were incredibly demanding, but as I continued striving to see that God was the source of all flexibility, courage, and humility, a gradual spiritualization in my thoughts resulted.

After Ranger School, I led a platoon of about 30 soldiers. We trained together and then were deployed to serve in Baghdad, Iraq, for a year. The lessons I learned during Ranger School were so helpful in trusting God for my own and my platoon's safety in difficult situations. I started to see God's protection not just as a promise, but as a universal law.

This was a time in my life when I didn't have many opportunities to sit down and study the Bible and Science and Health with much consistency. But I did have a constant trust that God was with me, protecting and guiding me in every situation. And I thought about the inclusive nature of God's law of love. Not only did it shelter me from harm, but everyone around me. There were many opportunities for me to put into practice what I'd been learning—having faith in God's messages and denying that evil had any reality, authority, or power.

One evening, while conducting an operation in an area considered dangerous, about 30–40 curious local children started to congregate around us, looking for candy. My soldiers always had some ready for them, and I appreciated this natural expression of kindness being shown. I became concerned that the children were in harm's way, but before I could do anything about it, a car drove by and shots rang out. The fire lasted for several seconds, but the rounds seemed to just pass harmlessly by, and no one was injured. As I was giving the appropriate orders, I began to acknowledge that God's law of protection for all was always at work. Even though I didn't repeat or think about a specific passage from Scripture or recite a familiar prayer, I knew the divine law of harmony and well-being was holding us all up. It was my privilege to bear witness to that divine law over and over during my tour in Iraq.

The story of the three Hebrew men in the Bible—Shadreach, Meshach, and Abednego—has helped me think about other people's experiences with God's laws. That story was particularly helpful in illustrating that this law of protection goes beyond meeting just physical needs, like keeping us out of bodily harm. This law can help erase the pain of emotional setbacks and struggles, too.

After I'd been home from Iraq for about a year, I started to ruminate over certain decisions and outcomes during my tour. I was struggling to reconcile these in my thought and felt as if I were climbing into a dark hole. After several months, I recognized the subtle, destructive nature of these thoughts. I felt that if I continued down this dark path, both my marriage and my ability to listen to God would be hindered.

One day, in a particularly dismal moment, there was suddenly a spark of light, a realization. I thought of Shadrach, Meshach, and Abednego's experience of protection, and it was fascinating to me that these three men were cruelly thrown into a fire for their belief in one God, yet they were unharmed by the flames. In fact, when they were let out of that fire, they didn't even have the smell of smoke on their clothes—no aftereffects.

I started to see God's protection not just as a promise, but as a universal law.

I realized that I'd been indulging the idea that I could be separated from my Creator. The only things that could be destroyed in my own experience were resentful, angry thoughts that were untrue and unlike God. I didn't have to be touched by painful memories or doubts. The thought came to me: You don't have to take another step in the wrong direction. You can just turn around and embrace the good in your life.

I thought, Is that really the answer? It was so simple. I knew in that moment that I didn't have to go through all the pain and agony of prolonged recovery. Nope! I could walk away from my struggles with the past. So I embraced the light of God's goodness. And I found myself totally free from the stress and concern I'd been harboring. Anxiety disappeared, and in the coming months, this change of thought moved my life into a new and fresh direction.

It's no coincidence that my prayers came full circle. From Ranger training, to deployment overseas, to returning home. I learned that I didn't have to accept that God's children are constantly at risk physically and emotionally from forces out of their control. We're always at peace, despite difficult circumstances, because God knows only peace. We don't have to be afraid, because God knows no fear. I believe it's our right as the children of God to know and feel these spiritual truths, no matter where we live in the world.

Rangers have a motto that is close to each of our hearts; "Rangers Lead the Way." That motto always reminds me that "Love inspires, illumines, designates, and leads the way," as Mary Baker Eddy wrote in Science and Health (p. 454). It puts God right upfront and center, always loving and guiding His flock. |CSS

For more on a related topic, log on to spirituality.com for the audio transcript of a chat held on May 27, 2008, with Chaplain (LTC) Tom Wheatley titled "Welcome home, Soldiers."

Joshua Niles devotes a large part of his time to the public practice of Christian Science healing. He lives in Olympia, Washington. 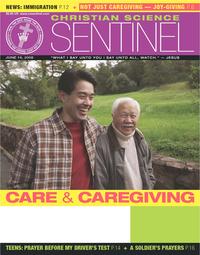