For quite a few months I’d been having problems with stiffness and pain in my joints. Whenever I experienced pain, I’d pray to know my oneness, my unity, with God as His very expression. This pattern carried on for months.

Then I began to notice a stiffness in my legs; my walking didn’t feel as light and nimble as it normally did. I was becoming quite concerned and wanted to devote more time to praying about these issues. Prayer as taught in Christian Science has been very effective for me in overcoming many problems over the last four or five decades. Prayer always involves getting a better understanding of God’s love and of our relation to Him.

For example, I have seen wonderful evidence of God’s care for me and my family, such as when my infant son was freed from a facial scald after hot coffee was accidentally spilled all over his face (see Sentinel, May 5, 1997). I have been healed of burns, various sicknesses, relationship problems, severe depression, and much more.

One morning when I awoke, my legs felt like lead. Turning to God in prayer, as I normally do in the morning, I declared that I had never left my Father’s house. I had always been in His care.

While praying, I remembered that my grandmother had great difficulty walking and had become a virtual invalid. I strove to see, and began to understand, that my grandmother’s true nature was never touched by this false claim of mortality. She’d always been, and still was, flourishing as an active spiritual idea, safe in God’s care.

I knew that the appearance of suffering and being imprisoned in a dysfunctional material body wasn’t true for my grandmother, and it wasn’t true for me, either. Inactivity is not of God, is not under Principle, another name for God, and therefore has no law to sustain it or pass it from one person to another. That was such a comforting thought. And this led me to acknowledge the truth for all of my ancestors, knowing that God was and is their Parent, their Life, and the governor of their being. I declared this truth until I felt the power behind the words.

I also addressed the belief that man is material and goes through an aging process, resulting in decay and eventual death. Man is spiritual. In divine Truth, I had always been at the standpoint of spiritual maturity, expressing God’s changeless being. Mary Baker Eddy writes in Science and Health with Key to the Scriptures: “Man, governed by immortal Mind, is always beautiful and grand. Each succeeding year unfolds wisdom, beauty, and holiness” (p. 246).

I then forgot about these early morning prayers until some time later in the day when I realized I was free, completely free. I have had no more problems with my joints since that time—about a year ago. The skip in my step is back, and I’m as active as I have ever been.

I’m overjoyed and very grateful for this wonderful divine Science that was revealed by God to Mrs. Eddy, which she then gave to the world, and for all the Christian Science periodicals, which inspire me and make me feel close to my Christian Science family. 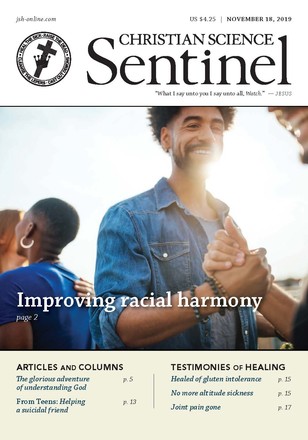 The glorious adventure of understanding God

Self-justification can be conquered

‘Christian Science had a better answer’