There’s a recreational sport that has grown in popularity called pickleball. For the most part, the people who play are out to have a good, clean, fun time, but for some, it is a serious business of winning. In a few instances that I’m aware of, people have become combative and almost vicious.

One time a disconcerted player felt as if he was being insulted, humiliated, and bullied by a more advanced player. Rather than leave, the disconcerted player remained, quickly calmed his thought, and asked the other player a good-humored question in jest. This helped defuse the conflict, and the game went on.

This approach is a good beginning, but we can do much more than defuse conflict and bullying; we can bring healing when conflict arises.

Bullying has shown up in many places, such as on the road, at the office, in neighborhoods, on planes, in politics, and in other arenas. It is one of the topics often addressed for students in schools and on social media, and it needs our specific prayerful attention.

Through study of the Bible and the Christian Science textbook, Science and Health with Key to the Scriptures, by Mary Baker Eddy, I have been learning how to pray effectively by spiritually understanding the omnipotence, omnipresence, omniscience, and omniaction of God, good, as the one Mind and the only Mind we reflect.

So who or what is a “bully,” and how can understanding and acknowledging God’s allness negate bullying? An experience showed me a lot about this.

One day I found myself challenged by what felt like bullying behavior when our landlord abruptly pounded on my door, demanding that she be allowed to come into our home to move an appliance and check the house because we were at the end of our lease agreement—or she wouldn’t return our security deposit. Usually I would have granted her that right, but my fifth-grade son was home from school because he had just been hit in the face with a baseball bat, and he needed my attention.

She was coming across to me as a bully, kind of like an evil monster at my door, telling me I was jeopardizing the return of my security deposit. But I chose to be still and listen to God rather than to mortal thoughts, and I was able to quiet my fears about both the timing of my son’s need to be healed and this aggressive approach by my landlord. I prayerfully put them both in the arms of our Father-Mother God, divine Love. I asked God, our divine Mind, to guide us.

Just then, I was impelled to step outside to talk to the landlord, and while she was screaming, the idea came to specifically express love. So I addressed her in a very kind way and apologized to her for not being able to let her come in right then. All fear dissolved in me; she no longer seemed like an evil monster to me; and the discord between us dissolved, too. We talked and settled the issue quickly so that I could be with my son, and we agreed she could come back at a later time.

I prayerfully put them both in the arms of our Father-Mother God, divine Love.

I remembered Christ Jesus’ words, “The kingdom of God is within you” and “The kingdom of God is at hand” (Luke 17:21; Mark 1:15). I didn’t have to make everything good or make good happen; I had to know that infinite Mind, God, included every right idea and that none of us had ever been cut off from this wisdom. I knew that my son and everyone involved that day were actually constantly embraced by the Comforter and by divine Love. God’s kingdom includes only His very good creation. I knew that only Godlike qualities could be expressed, such as patience, love, forgiveness, and goodwill toward one another. And I knew that in reality, no one needed to, nor could, suffer physically or emotionally.

That evening the fellow student, who had apparently swung the bat at my son on purpose, came over with his father to bring baseball cards with his apology. Through Christian Science treatment and loving care, my son healed quickly and was at school the next day to the great amazement of the school nurse, teacher, and friends.

Also, the landlord’s threats to not return our security deposit were nullified when later that week a full refund check came in the mail.

We are all God’s children, His spiritual ideas—created in the image and likeness of God, Spirit—and the expression of divine Mind, of Love, not fear or aggression. His creation includes each and every one we come across in our day-to-day experience.

But the Bible speaks of a carnal mind, and Mary Baker Eddy, who discovered Christian Science, refers to it as mortal mind. It helps me to understand that both terms relate to a limited, finite, erroneous “fear of the grave” mind or thinking.

So the real “bully” is what appears to be the carnal mind, mortal mind, or mortal mentality. But no matter how aggressive or insidious the carnal mind may appear to be, in truth it is not a power apart from God; it doesn’t have real power. The one Mind, God, is the only power.

Mary Baker Eddy writes, “Though the way is dark in mortal sense, divine Life and Love illumine it, destroy the unrest of mortal thought, the fear of death, and the supposed reality of error” (Science and Health, p. 596).

Through understanding divine Life, God, we can oppose and deny aggressive thoughts that would try to make us fearful, or feel like a victim, or pin evil intent on another. If we identify with God as our Mind, the one Mind we reflect, we can rule mortal mind’s taunts out of our thought, knowing that they are, in truth, no part of our thinking or of the thinking of someone who is acting out confrontational or bullying behavior. And we find that truly seeing and loving the individual’s real selfhood as God’s reflection can either stop that behavior or remove one from the situation.

Some passages in the Bible are also teaching me more about praying about these kinds of situations. A question is asked in the book of Isaiah regarding a fallen Babylonian king, who had been oppressive: “Is this the man that made the earth to tremble, that did shake kingdoms?” (14:16).

That question and others in that chapter have increasingly intrigued me, along with a passage that comes soon thereafter that points to the all-power of God: “For the Lord of hosts hath purposed, and who shall disannul it? and his hand is stretched out, and who shall turn it back?” (14:27). Later in Isaiah it says, “I am the Lord, and there is none else, there is no God beside me” (45:5).

The Bible says that God saw everything that He had made and beheld it as very good. And Christian Science explains that God’s creation is entirely spiritual and perfect, and is the only reality. By nature of God’s allness, creation precludes any evil, thus showing that it has no real power.

To prayerfully start and stay mentally in the Truth—acknowledging and learning more about the one and only creator, God, who is Principle—we are able to check the false assumption that error has power and can create other errors. We find the right outcome when we start with the right premise. We start with the premise that man’s life, our divine being, is not in matter, but in and of Spirit. When we know that eternal God is our Life and our only Mind, we begin to understand that we can never actually be separated from God’s tender care, guidance, and governance. And then we realize that our Father-Mother God never made a perpetrator of bullying behavior or a victim of it.

As we see from the life of Christ Jesus, he expressed courageous spiritual strength. And we are all capable of letting this Mind be in us as it was in Christ Jesus (see Philippians 2:5).

If confronted by bullying behavior, we can choose not to be stymied by fear, but to wisely follow divine leading. Understanding that there is one God, good, and that all power truly lies in the hands of this one and only creator, we can firmly oppose and deny the claims of mortal mind and work to eradicate the belief of error. When Mind is guiding us—and we know Principle is governing us, and Love is guarding each and every one of us—we can defeat and even prevent bullying. 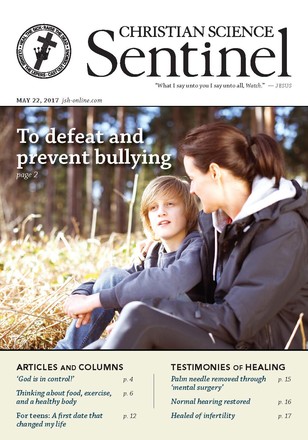 To defeat and prevent bullying

‘God is in control!’

Thinking about food, exercise, and a healthy body

Don’t be fooled by matter’s illusion

A first date that changed my life

'Peace, that speaks the heavenly Giver'

Photograph by Nancy Robison | May 2017

The law that liberates us