Christian Science found me over thirty years ago when I was bound by a sickness pronounced by the physicians to be tuberculosis of the lungs. No hope was offered for my recovery. I was young, well launched on a professional career, full of zeal, and undaunted in my hope that somehow there was a way out. But this "way" when it came was one which was wholly unexpected. I was with a little group one evening whose conversation drifted to the subject of Christian Science. Fortunately, one of the number was a very clear student. Her elucidations were so simple, so convincing and unanswerable, that light came instantly into my consciousness and I was healed. Other complications which were considered usual accompaniments of this disease vanished with it, and there has never been any return of these difficulties.

I was so filled with the joy and wonder of this truth that I lost no time in securing Mrs. Eddy's writings, attending church services, and availing myself of every privilege offered by the Christian Science movement. The beauty of this revelation of the allness of God, good, flooded every experience of my life, and I faced the world with the happy assurance that now no trouble could assail me over which, with this newfound understanding, I could not be the victor.

How priceless is this first view of heaven on earth—the glad surprise of finding Truth so simple and Love divine so near! As the years advanced, and the upward way became more rugged, demanding spiritual growth, I have recalled with boundless gratitude that early experience, that flood of light which came, so instantly banishing the darkness. Since then I have learned that it is the wise design of Love to carry the young lambs in its arms, while the sheep must pass under the rod. The lessons that came later have often seemed severe, requiring long and persistent study and a deeper searching of the Spirit before the answer came.

For practically all these thirty years I was blessed with health. Then, two years ago, I was laid low with an illness, the complications of which appeared serious, involving the heart, stomach, and nerves in a general breakdown. The way opened for me to be received at the Christian Science Benevolent Association Sanatorium at Chestnut Hill, and though more than once in the first week the practitioner was called upon to work for life, for I feared I was passing on, I was, day by day, lifted out of "the miry clay" into an increasing sense of health.

Words can never express my gratitude for the comfort, the spiritual support, and the gentle ministrations of the Benevolent Association Sanatorium. In five weeks I was able to leave, though it required three months more to restore me to a sense of confidence and vigor that enabled me to resume my professional work. When that time came, I found that I was freer, fresher, and more equal to my daily task than I had been in many years.

With many others I can bear witness to the sweet unfolding comfort of Love as found in Christian Science, when bereft of dear ones. The breaking of my closest earthly tie came twenty years ago, but the lesson of Love's presence learned then, and the exaltation of that experience, have continued to bless me.

From the vantage point of higher understanding, I can see that the problems which were the hardest to solve were those resulting from ambition, self-will, and self-justification, errors which for a long time evaded discovery. But after years of disappointment with human effort and change, I learned something of the truth of Mrs. Eddy's statement (Science and Health, p. 324), "Gladness to leave the false landmarks and joy to see them disappear,—this disposition helps to precipitate the ultimate harmony." I seemed to have to struggle through to the realization of the emptiness of personal honors, the futility of human strife. Then I was willing to pray in deep sincerity, "Thy will be done," and to seek earnestly for the peace that comes from humility and trust. Of the countless blessings which I owe to Christian Science, I am most grateful for the glimpse it has given me that only in spiritual truth do we find satisfaction and the rest that "remaineth ... to the people of God."

I am more grateful than I can express for all the benefits so richly provided by the Christian Science movement, and for the life, love, and labor of Mary Baker Eddy, who so hungered and thirsted after righteousness that not only was she filled, but the overflow was enough to pour out to all mankind, so that all who will, may find the blessing, comfort, and healing that await them in Christian Science.—(Mrs.) Glenna Smith Tinnin, New York, New York. 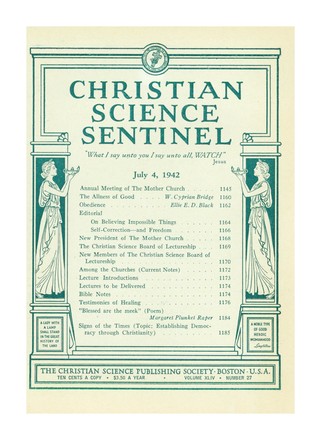 The Allness of Good

It would be impossible to express...

By Thelma Brooks with contributions from Ethel Brooks | July 1942

I desire to express gratitude for...

"Blessed are the meek"