On the road again

Emily Mattson
Over Christmas break last year, I decided to visit a friend at his college since my college break started a few weeks earlier than his. My mom wanted to visit one of her friends in the same area as well, so we drove down together, and I dropped her off, proceeding about an hour further to reach my friend. We had a great time catching up and stayed up late hanging out with friends. Then the next afternoon, I drove back to pick up my mom and head for home.

On the drive home, we hit some pretty heavy traffic due to thick fog. I hated driving in fog, and my mood was made worse by the fact that I had been up late the night before. I couldn’t wait to just get off the freeway.

About five minutes from my exit, the traffic started to let up and I began to relax. Then, all of a sudden, I was in an accident involving two other cars. Because of the fog, we ended up in a small pileup. Nobody was injured, but the cars had to be towed, and I was quite shaken.

For a while after the accident I stopped driving altogether. Even when I had the opportunity, I turned it down, because I had become a little scared of driving.

Several weeks later, toward the end of the Christmas break, my dad and I headed to Seattle for a wedding. Seattle is about 14 hours away from our home. My dad knew I was still feeling iffy about driving, but at one point during the trip, he offered to let me take the wheel for a while on the freeway. I was still a little concerned about driving, but I knew that I had to face my fear at some point and hopped into the driver’s seat. But as the miles wore on, I started to feel very alone, even with my dad in the passenger’s seat.

I knew I had to handle this fear somehow, but didn’t know where to start. If I had been at home, I might have looked for spiritual ideas in the Bible or Science and Health—but I didn’t have those resources on the road. And while I’d had healings in the past by relying on Christian Science, I didn’t know how anything I’d dealt with before related to driving. I just wanted to be free of the nervousness about being behind the wheel!

God would take me safely down whatever path I was meant to follow.

Then, all of the sudden, a saying came to me that I had learned at summer camp when I was younger. When we were going on the ropes course, someone had told me, “If you ever feel like you’re falling out of God’s hands, you’ll fall right into His lap.” I had no idea how this related to driving, but that message just kept coming to me. As I thought more about it, I realized that God cares for me no matter what the situation is. I didn’t need to feel unsafe or insecure high in the trees on a ropes course, and I didn’t need to feel that way driving along an unfamiliar road. Immediately I felt better—not just for the recognition that I would always be under God’s care, but also for the realization that healing can be as simple as relating to a silly little saying.

As we continued on the drive, I kept searching for more spiritual ideas about security and safety. I started thinking of a Bible passage that my uncle loves. Whenever he’s visited our house, he’s given a testimony in church—and no matter what the issue was, he mentioned this verse: “In all thy ways acknowledge him, and he shall direct thy paths” (Proverbs 3:6). At first, I’d thought that there was no way that one quote could apply to every single issue, otherwise we wouldn’t need a whole Bible (not to mention a whole Science and Health). But all of a sudden, I realized that my uncle’s quote was not only perfectly relevant to my driving situation, but it could easily be used in every aspect of my life. In all my ways I would acknowledge the power and grace of God, and He would take me safely down whatever path I was meant to follow. It’s as simple and powerful as that.

From then on, driving was easy and enjoyable—not a scary thing or something that I worried could take me away from God’s care. And any lingering fear from the earlier car accident was totally erased. I’m so grateful for that saying from summer camp and for my uncle’s love of the quote from Proverbs—because both those sayings were on hand in my time of need.

Emily Mattson is a sophomore at Principia College, studying sociology and religion. She plays on the lacrosse team and loves to ride horses whenever she can. 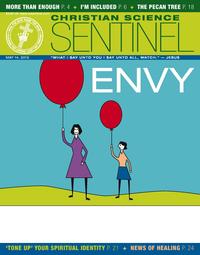