'Let there be no strife'

“Let there be no strife, I pray thee, between me and thee … for we be brethren,” said Abraham to his nephew Lot in a dispute over land and resources (Genesis 13:8). In a similar vein, Christ Jesus taught his followers, “Agree with thine adversary quickly, whiles thou art in the way with him” (Matthew 5:25).

The discord and division so prevalent in the Middle East and in many corners of the world—between tradition and modernity, extremists and moderates, tyranny and freedom—call the world to wise and merciful prayer. And the lives and teachings of Abraham and Jesus provide us with a genuine road map to peace, for both exemplify forgiveness in the face of envy, bitterness, and revenge.

Mary Baker Eddy, who discovered Christian Science, describes the tendency of strongly held beliefs and opinions to separate humanity into warring factions in this way: “Finite belief … seeks to divide the one Spirit into persons and souls.

“Through this error, human belief comes to have ‘gods many and lords many.’ Moses declared as Jehovah’s first command of the Ten: ‘Thou shalt have no other gods before me!’ But behold the zeal of belief to establish the opposite error of many minds” (Science and Health with Key to the Scriptures, p. 280). There is only one God, and He loves each of His offspring unconditionally. This truth, held with heartfelt conviction, will begin to reseal strained and broken bonds of brotherhood in the Middle East and elsewhere by revealing the unity of God and man.

The life of Abraham provides many instructive examples of God’s unified purpose for His children, despite feelings of rivalry and malice between individuals. At one point Abraham’s wife, Sarah, felt mocked by Ishmael, the son of her servant Hagar and Sarah’s husband, Abraham (see Genesis 21:9–21). Angrily reacting, Sarah forced Abraham to put Hagar and Ishmael out of their home, perhaps expecting both the child and his mother to perish. Yet in a beautiful illustration of divine Love’s tender care, God provided water for Hagar and Ishmael in the wilderness. Envy, rivalry, and revenge were powerless to destroy them. God’s holy purpose was fulfilled in both Isaac and Ishmael—considered to be patriarchs of the Jewish and Muslim faiths, respectively.

A request for forgiveness, which requires such humility, is often the missing element in finding a peaceful resolution to conflict. At times the heart might protest that one has done nothing wrong and that the blame lies entirely with the other party. Resistance and resentment may battle with humility and compassion. How strengthening, then, to remember that we do not humble ourselves before another, but before God. Christ Jesus prayed with his students: “Forgive us our debts, as we forgive our debtors” (Matthew 6:12). And this sentiment is also echoed time and again in the Quran, through declarations that Allah is merciful, pardoning, and forgiving.

God’s grace forgives, not because of what man does or doesn’t do, or who is right or wrong, but simply because forgiveness is God’s gift of grace—unconditional love—for each and all, for you and your brothers and sisters.

No matter where we live, we can seek to see the face of God’s love in another, and know His pleasure as we bow our heads seeking forgiveness of past wrongs. In the presence of such heavenly pardon, envy, rivalry, and revenge suffocate from lack of expression, and conflicts are resolved. The words of a favorite hymn offer a prayer that supports the dissipation of warfare throughout the world:

Let all that now divides us
Remove and pass away,
Like shadows of the morning
Before the blaze of day.
Let all that now unites us
More sweet and lasting prove,
A closer bond of union,
In a blest land of love.
(Jane Borthwick, Christian Science Hymnal, No. 196) 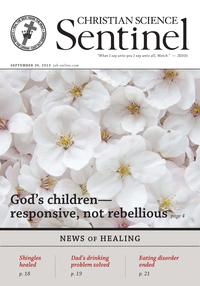