If you don’t like the news, you don’t appear to have a whole lot of options. You can tune out—as more and more people are doing—but that can feel like sticking your head in the sand. And if you tune in, it can seem the only options are to either hold your nose or be whipped into a frenzy of anger, frustration, or fear.

In a world where turmoil seems to lurk behind every click or turn of the page, how do we stay informed without losing our peace of mind?

As the editor of The Christian Science Monitor, and someone who has reported from the Pentagon to Pakistan, I’ve had to give this a lot of thought. The answer that has been most meaningful to me has come from looking at the news through a spiritual lens.

It can be easy to think of what’s being reported in the news as something “out there.” On the surface, that offers us a sense of safety. If something is “out there,” we can keep it at arm’s length. How much do we really need to be concerned about a bombing thousands of miles away or an injustice on another continent?

But that sense of security is two-edged. If we are passive news consumers, then we are quickly confronted with our own powerlessness. If something is “out there,” then there’s little or nothing we can do to change it. We can feel helpless if, for example, we appear to be threatened by a law or a politician or an economic trend. The distance we create from the news comes back to bite us, big-time.

But the good news about news, I have found, is that it’s not, in fact, a question of something happening “out there.” It actually comes down to our own hearts and thoughts. This forces a responsibility on us; we can’t simply disengage. But it also offers a wonderful promise. If we learn how to engage productively with the news, we gain a much deeper feeling of control and calm that blesses us and the world.

I love the story of Diane Nash, a civil rights activist in the 1960s. When she first began protesting racial discrimination, she was scared. What could she really hope to accomplish against injustices centuries old? But over time, her confidence grew, even amid verbal and physical abuse. Even as she was the one sent to jail.

At one point the state of Mississippi gave her a choice: Leave the state or face two years in jail for training college students to take nonviolent action. She couldn’t imagine leaving before the fight was over. After three days of prayer in preparation for the court date, “There was nothing anybody could do to me,” she told The Guardian newspaper a couple of years ago. All the attempts at intimidation had had the opposite effect. “I learned I could exist with virtually nothing.” Ultimately, the state let her go after ten days (Jamiles Lartey, “Diane Nash: ‘Non-violent protest was the most important invention of the 20th century,’ ” www.theguardian.com, April 6, 2017).

The way Ms. Nash came to view herself and the world enabled her to play a part in changing the world for the better.

When I traveled to Kandahar, the heartland of the Afghan Taliban, in 2007, I held tight to these words of Paul, a follower of Christ Jesus, in the Acts of the Apostles in the Bible: “None of these things move me” (20:24). How could someone facing potential beatings, imprisonment, and death be unmoved by such a prospect? Paul answers that question by continuing, “Neither count I my life dear unto myself, so that I might finish my course with joy, and the ministry, which I have received of the Lord Jesus, to testify the gospel of the grace of God.”

This, to me, sheds light on something beyond the material picture. It points to one’s primary purpose as expressing and bearing witness to the nature of God. The God revealed by Christ Jesus is steadfast, active, and universal divine Love. Paul’s writings elsewhere convey his conviction that he could give his body to be burned, but it would mean nothing if he did not know this Love.

Divine Love is the basic building block of our being. Even the darkest human experiences cannot extinguish it.

So the real question is, What is this Love, and how can we know it better? In her writings, the Discoverer and Founder of Christian Science, Mary Baker Eddy, wrote it with a capital L as a synonym of God, to show that God’s love is more than human affection or empathy, as progressive as those are. It is safety, beauty, joy, and hope all rolled into one because God is Love itself, spiritual and eternal.

This is not a material calculation. In fact, a true understanding of divine Love breaks materialism. To see through the eyes of divine Love is to see creation differently, spiritually. And to see spiritually is to realize that in spiritual reality there are no conflicts, because there is only God, good, and the infinite expression of His goodness, man. What this means for us and our world is that we don’t need to see conflict as legitimate or inevitable. This opens the way to hope and solutions.

Like the prophets and apostles, we begin this work of seeing spiritually now. “Now is the accepted time; behold now is the day of salvation,” the Bible assures (II Corinthians 6:2).

But how can we possibly do this with news, which so often gives such an aggressively opposite view of the world? We can do it step by step. This is precisely why being an active news reader is so important—and points to why Mrs. Eddy founded the Monitor.

In truth, it is no difficult task to see evidence of the activity of divine Love if one is inclined to look for it. For instance, though in many ways Afghanistan could hardly be more different from the United States, I saw there the same love of family and desire to live a meaningful life that I have seen everywhere. Divine Love is the basic building block of our being. Even the darkest human experiences cannot extinguish it.

News reflects, at its heart, humanity’s struggle (and progress) in understanding this. The real story of humanity is not in ruminating on the details of how a particular struggle is playing out in China, Brazil, France, or elsewhere. It is in recognizing the need to expand and uplift the global sense of good toward transformative divine Love. That journey begins and ends in individual hearts and thoughts.

There are many ways to engage with the news. It is our choice whether to indulge fear and frustration or to remake the news—to let Love shape how we engage with the world around us and “remake” ourselves from the inside out. It is not a choice we can ignore.

United, not divided, in God’s love

It was a beautiful, sunny morning when I went to meet some friends for breakfast at a restaurant in a neighboring town.Shortly after I arrived at the restaurant, the conversation turned to politics...

The tennis ball was coming at me faster, higher, and with more spin than I was accustomed to, and my return shots were going over the base line wide to the left and right. “Watch the ball, watch th... 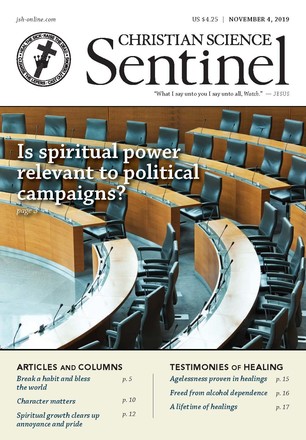 Break a habit and bless the world

A lifetime of healings

Seeing past turmoil in the news