One of the distinguishing features of every great reform is this, that its leaders are forever being asked to let things alone, and will not do it. The demand of those possessed of devils in the land of the Gadarenes, was met by the Master in a way which takes on a new significance in Christian Science. He emancipated the victim of deception by dispelling the evils which dominated him. At another time, the falsity which had enslaved a poor man declared that it knew Jesus, and his scientific and sufficient answer in effect was this: I do not and will not know you.

Now as then the cry "Let us alone" comes up from many quarters, and especially from the realms of precedent and tradition, custom and vested interest, creedal self-content and fleshly satisfaction. If a thing has existed for a long time, has been believed in by a great many people, is supported by law, it is wont to assert its rights and to insist that it shall be left undisturbed. If it can gain this point, it is content, and will not quarrel with any one, but rather pose as a champion of the progress it would interdict, by maintaining of the status quo. It makes but this single demand, and it finds its chief ally in the fear of that vast body of well-meaning people who hesitate to disturb even an acknowledged temple of Moloch, lest its falling pillars come upon them.

Mrs. Eddy sounded the key-note of Christ Jesus' Christianly scientific attitude toward all evil when she said, "Truth and error are irreconcilable" (Science and Health, p. 19). Our Lord was no less positive than patient. In him unvarying compassion toward the erring joined hands with unequivocal condemnation of error; and the only thought any true Christian can entertain toward every least protesting devil of false sense is this, that it shall be immediately and forever cast out. We do well if we are neither mesmerized by the pleading of long coddled errors nor frightened by the turmoil of thought and experience which the scientific condemnation of them is likely to beget. When Jesus spoke to the epileptic boy, the devil tare him until he foamed at the mouth; but in the Master's loyalty to Truth and Love he was moved neither by the appeals nor by the curses of false sense. His was the true light, which knows no darkness at all.

Mrs. Eddy has defined the genius of Christianity as "a calm and steadfast communion with God; a tumult on earth" (Christian Healing, p. 2), and this because spirituality rebukes carnality and right condemns wrong. Today's most serious social problems are the direct outcome of the timidity of men who do not lack a clear conviction respecting the ethics of the situation, but who consent to let conceded wrongs alone, lest some possible political or economic catastrophe be precipitated. Some unjust advantage, like the private appropriation of communal gains, through which the few secure their ease by burdening the many, is first made lawful, and thus respectable; whereupon every protest against it is met with the cry, "Let things alone; don't be radical; don't disturb existing law and order." And yet the Master stood for truth and right regardless. He dared to condemn respected wrong and entrenched iniquity, and so must every man who stands with him.

Here as everywhere the individual experience is but an epitome of world experience. The cry "Let us alone" is heard in every unredeemed chamber of human impulse, and every least concession thereto delays the day of our salvation. Error certainly will not let go of us so long as we do not choose to let go of it. Whether, therefore, in the domain of the individual or of the community, the only fitting and seasonable address to error is this, "Begone!" The rebuke of evil must be scientific, it must be brave, and it must be continuous; otherwise, there can be neither progress nor peace. The call of Christian Science is that we shall not let unrighteousness alone, either in our own hearts or in the communal life, but recognize it for what it is,—a devil,—and cast it out through that irresistible power which the Christ-coming confers. 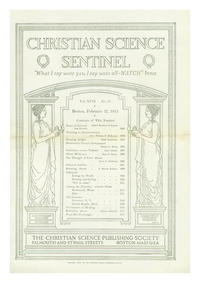