The Bible contains many examples of people being provided with whatever they needed, sometimes in the most unexpected ways. For example, when Jacob was fleeing to escape his brother’s anger, he had a vision of angels and received assurance from God of His ever-presence. On awakening, Jacob declared: “Surely the Lord is in this place; and I knew it not” (Genesis 28:16). He was subsequently reconciled with his brother.

Another Bible character Hagar, Abraham’s bondwoman, was sent with her son into the wilderness. She had no more water and was afraid that the boy would die of thirst, but God showed her a well of water, where none had appeared to be (see Genesis 21:9–19).

In the New Testament, Peter’s deliverance from prison when his position seemed hopeless gives the reader confidence that trusting God and leaving the outcome to Him will bring about a solution, whatever our problem may be (see Acts 12).

I have had many experiences when my prayers have resulted in solutions, often unexpected ones. A number of years ago a friend and I decided to take a break from our daily commutes to work and see something of the world while we were free to do so. Accounts of long-distance motoring journeys inspired us to plan to drive from our homes in South East England to Bombay (now Mumbai), India. Then we would continue by ship to Australia. Preparations took at least a year, but finally we set off in a ten-year-old rear-engined Volkswagen “Beetle.”

For a few weeks all went well until we arrived at a remote border crossing, where neither fuel nor currency exchange was available. An American traveller kindly changed a small amount of English money into the local currency, and with this we continued on our way.

Our progress, however, was slow. We had a problem with our car’s engine cutting out, which we believed was being caused by dust from the desert road being drawn into the rear-engine compartment. We had stopped repeatedly to clean the engine, but at sunset, when the car once again came to a halt after we covered only a few more miles, we decided to camp beside the road for the night. This was long before mobile phones, and we had no means of contacting anyone.

So with an immobilized car, insufficient fuel to reach the next town, and no means of communication, I began praying. Both my friend and I were students of Christian Science, and it felt natural for me to turn to God. Christian Science teaches that God is infinite Spirit, therefore everywhere. He is also Love, and Love’s children (you, I, and everyone) cannot be separated from His ever-presence. So while it appeared that we were alone in a desert, I felt confident that help would come, although I did not know how or from where.

Meanwhile we prepared a meal and wrote up our daily journal—and continued praying. I felt complete trust in God, the Parent of us all, the one divine Mind, and infinite Love. This trust is essential. Divine Love does not allow any harm to come to His/Her children.

After some time the light of our camp lantern attracted the attention of a passing vehicle, which turned off the road and stopped. Four German students asked to camp nearby. We welcomed these young men, and over a meal we chatted and exchanged travel experiences.

The next morning we explained our situation and then saw that the students’ vehicle was a VW camper van whose engine was similar to that of our car. At their suggestion we swapped and tested engine parts to determine which, if any, of our parts weren’t functioning. During this process, the parts underwent some needed cleaning. When they were put back into place, our car’s engine finally sprang into life.

At that we all cheered, but we still needed fuel. That was no problem. The camper carried extra fuel in cans on its roof, and we bought a canful with the money changed by the American at the border. We were able to fill our tank with that canful. Now, with our car back on the road, we moved off, giving thanks to God all the way.

To this day I am in awe at this complete answer to our prayers. The VW camper was the only vehicle that had appeared from any direction over several hours.

Throughout this three-month trip of nearly 12,500 miles, we met with so much friendship and kindness, which was evidence to me of the truth of this whole statement, that truly, “One infinite God, good, unifies men and nations; constitutes the brotherhood of man; ends wars; fulfils the Scripture, ‘Love thy neighbor as thyself;’…” (Mary Baker Eddy, Science and Health with Key to the Scriptures, p. 340).

As we drove on our way I found myself humming Hymn 217 from the Christian Science Hymnal, which ends with these words: “So shall the wide earth seem our Father’s temple, / Each loving life a psalm of gratitude” (John Greenleaf Whittier). 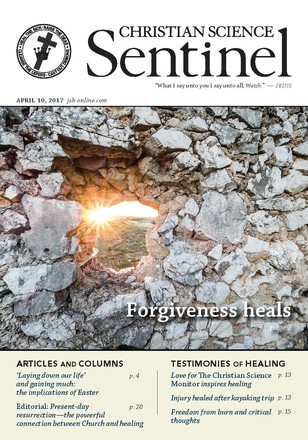 ‘Laying down our life’ and gaining much: the implications of Easter

God’s help is near

Would I ever see my dog again?

Freedom from burn and critical thoughts

The power in welcoming alternative views

By The Monitor’s Editorial Board | April 2017

Listening to, and loving, one another