The Practical Faith of Luther

Since the necessity of obeying Jesus' command, "Heal the sick," has been urged upon the Christian world by Christian Science, its followers have frequently met with excuses for neglecting this vital part of Christianity, and with endeavors to justify a faith without healing power on the part of members of other religious denominations. Bearing in mind this fact, it is rather striking that the view and example of the pioneers and leading exponents of Protestantism afford as a rule no justification for such a position. Luther, for instance, as is well known, on several occasions was rewarded with speedy recovery from severe illness in answer to his prayers, and he has given practical evidence as to his view regarding this important question. In Dr. A. J. Gordon's work, "The Ministry of healing," we read,—

"Martin Luther, 'whose prose is half a battle,' would belikely to speak strongly on this subject, if he spoke at all. Martin Luther, whose prayers were battles, so that they who knew him were wont to speak of him as 'the man who can have whatever he wishes from God,' would be likely to plead efficaciously in this field if he entered it at all, and so he did. The testimony of Luther's prayers for the healing of the body are among the strongest of any on record in modern times. He has been quoted, indeed, as disparaging miracles, and the explanation of this fact is perfectly easy for those who have investigated his real opinions.... But if we turn from Luther the controversialist to Luther the pastor, we find a man who believed and spoke with all the vehemence of his Saxon heart on the side of present miracles."

Perfect recovery is recorded in several instances where he prayed for the sick. The most notable one is that of Philip Melanchthon. An account of this recovery, which seems to be trustworthy, is given by the historian Seckendorf. Melanchthon had fallen ill on a journey and a messenger had been despatched to Luther. The story continues: "Luther arrived and found Philip about to give up the ghost. His eyes were set: his consciousness was almost gone: his speech had failed, and also his hearing: his face had fallen; he knew no one, and had ceased to take either solids or liquids. At this spectacle Luther is filled with the utmost consternation, and turning to his fellow-travelers says: "Blessed Lord, now has the devil spoiled me of this instrument!' Then turning away towards the window he called most devoutly on God." The narrative goes on: "After this, taking the hand of Philip, and well knowing what was the anxiety of his heart and conscience, he said, 'Be of good courage, Philip, thou shalt not die.' Melanchthon writing to a friend says: 'I should have been a dead man, had I not been recalled from death itself by the coming of Luther.'" Luther speaks in the same manner writing to friends: "'Philip is very well after such an illness, for it was greater than I supposed. I found him dead, but by an evident miracle of God, he lives.'"

Such is the witness of the great reformer, and if needful, it might be strengthened by reference to other remarkable instances of his power in prayer for the sick. That of Myconius is well known, who wrote of himself: "Raised up in the year 1541 by the mandates, prayers, and letter of the reverend Father, Luther, from death."

Luthard furnishes this version of the event: "Myconius, the venerated superintendent of Gotha, was in the last stage of consumption, and already speechless. Luther wrote to him, that he must not die: 'May God not let me hear so long as I live that thou art dead, but cause you to survive me. I pray this earnestly, and will have it granted, and my will be granted herein, amen.'" "'I was so horrified,' said Myconius afterwards, 'when I read what the good man had written, that it seemed to me as though I had heard Christ say, "Lazarus come forth,"' and from that time Myconius was, as it were, kept from the grave by the power of Luther's prayers, and did not die till after Luther's death" (Luthard's Moral Truths of Christianity, p. 298).

The stout lion heart of the reformer revolted against the grotesque miracles of the anti-Christ; but the believing heart of the Christian took the promises of God. and pleaded them and proved them and he gained what he regarded as the greatest of conquests: that of having demonstrated Scripture, so as to be able to say of one text of the Bible: "This I know for certain to be true."

Thus we see plainly that Luther has set to his followers a grand example of utter reliance on God as the true physician and healer of disease, and we may safely infer that any adverse criticism of such trust would hardly meet with his approval. These incidents from his life, viewed in the light of Christian Science, are also of special interest, as they show distinctly that he possessed more than what is commonly understood by faith; his prayers were no more supplication, they lifted his mind to an attitude from which he spoke to the sick with authority, and expected their recovery without any doubt. His words addressed to Melanchthon: "Nor become the slayer of thyself," prove that he recognized the influence of the human mind on the body, and the necessity to relieve it of fear and despondency.

The above work by Dr. Gordon contains many illustrations of the same subject, a few of which may be added here:—

"Richard Baxter writes: 'I had a tumor rise on one of the tonsils or almond of my throat, round like a pease, and at first no bigger; and at last no bigger than a small button, and hard like a bone. The fear lest it should prove a cancer troubled me more than the thing itself. I used first dissolving medicines, and after lenient for palliation, and all in vain for about a quarter of a year. At last my conscience smote me for silencing so many former deliverances that I had in answer of prayers; merely in pride, lest I should be derided as making ostentation of God's special mercies to myself, as if I were a special favorite of heaven, I had made no public mention of them. I was that morning to preach just what is here written, and in obedience to my conscience, I spoke these words which are now in this page; viz., 'How many times have I known the prayer of faith to save the sick when all physicians have given them up as dead,' with some enlargements not here written. When I went to church I had my tumor as before (for I frequently saw it in the glasse, and felt it constantly). As soon as I had done preaching, I felt it was gone, and hasting to the glasse, I saw that there was not the least vestigium or cicatrix, or mark wherever it had been, nor did I at all discern what became of it. I am sure I neither swallowed it nor spit it out, and it was unlikely to dissolve by any natural cause that had been hard like a bone a quarter of a year, notwithstanding all dissolving gargarisons. I thought fit to mention this, because it was done just as I spoke the words here written in this page. Many such marvelous mercies I have received, and known that others have received in answer to prayers."

Of Edward Irving the book contains the following: "He was no more theorist. He not only exhorted his flock 'to live by faith continually on Jesus from the body as well as the soul,' but he has told us the story of his casting himself on the Lord when mighty disease laid hold of him; and how his faith was tried to the last extremity till with swimming brain and deadly sweat he stood holding on to the sides of the pulpit, waiting for God to fulfil in the eyes of the people his word. 'The prayer of faith shall save the sick; and how his Redeemer at last appeared for his help and loosed for him the bands of sickness, enabling him to preach on that morning with such demonstration and power of the Spirit as he had rarely known."

We can but admire the childlike simplicity and splendid devotion of these men, who overcame the enemy even with a faith that had not yet reached an understanding of the unreality of disease; we know, that such faithfulness and moral courage applied to the work of Christian Science will be followed by speedy progress and carry us over any obstacle that would try to obstruct the way; and grateful indeed we may be to her who has made the way so plain that the overcoming of disease through the prayer of understanding is no longer the exception. 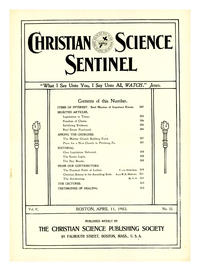