Ye are blessed of the Lord which made heaven and earth.

The Lord openeth the eyes of the blind: the Lord raiseth them that are bowed down: the Lord loveth the righteous: the Lord preserveth the strangers; he relieveth the fatherless and widow.

In verses 3 and 4, the Psalmist declares that trusting in human help is foolish. The “God of Jacob” (v. 5) is able to care for every need, as seen in this list of His healing, delivering, and preserving actions.

This catalogue of divine power has been viewed as foreshadowing Jesus’ healing works, as described in the Gospel of Matthew: “The blind receive their sight, and the lame walk, the lepers are cleansed, and the deaf hear, the dead are raised up, and the poor have the gospel preached to them” (11:5).

“From the morning until midday” likely encompassed five or six hours, an indicator of the reverent attention of those listening. This public reading evidently came at the request of the people themselves. And although religious meetings were usually limited to adult males, this gathering included women.

One source notes this event as “the first public recognition of the authority of the Pentateuch in the Bible.” After centuries of development, it explains, the Torah—the Hebrew law—would have been in nearly final form at this time.

Then he said unto them, Go your way, eat the fat, and drink the sweet, and send portions unto them for whom nothing is prepared: for this day is holy unto our Lord: neither be ye sorry; for the joy of the Lord is your strength.

When the law was read to them, “all the people wept” (v. 9). Most scholars see this response as sorrow and repentance for having disobeyed God’s commandments. But the people are assured that the day is holy, and are encouraged instead to celebrate “the joy of the Lord.” Their understanding of the law does indeed make them happy: They made “great mirth, because they had understood the words that were declared unto them” (v. 12).

I exhort therefore, that, first of all, supplications, prayers, intercessions, and giving of thanks, be made for all men; for kings, and for all that are in authority; that we may lead a quiet and peaceable life in all godliness and honesty.

“The church’s prayers are lifted up for all because the Son’s sacrifice was offered for all,” writes a commentator. “Hence petitions are not to be offered up for the needs of the believing community only but for the world, for all sorts and conditions of humanity.”

Including “all that are in authority” not only fulfills this charge but also brings peace and order in society. The scholar continues, “The worshiping community … prays that all may enjoy an outwardly quiet life and an inwardly peaceable life in all godliness, with decent standards of public accountability.”

Now when he came nigh to the gate of the city, behold, there was a dead man carried out, the only son of his mother, and she was a widow.… And he came and touched the bier: and they that bare him stood still. And he said, Young man, I say unto thee, Arise. And he that was dead sat up, and began to speak.

Widows existed on the economic and cultural margins of society in the ancient Near East. This widow’s plight was worsened by the loss of her son, who had provided for her. The large crowd attending her showed the community support referred to in Deuteronomy 24:17–21 and later described in the book of James: “Pure religion and undefiled before God and the Father is this, To visit the fatherless and widows in their affliction, and to keep himself unspotted from the world” (1:27).

Touching the dead man’s bier rendered Jesus ritually impure according to Jewish law. But like his earlier outreach to a leper (see Luke 5:13), this act demonstrated the Master’s allegiance to divine power over religious requirements.

This story is one of three instances of Jesus’ raising someone from death. He also raises Jairus’s daughter and Lazarus (see Luke 8:41, 42, 49–55 and John 11:32–44) before experiencing his own resurrection.

They shall not hurt nor destroy in all my holy mountain: for the earth shall be full of the knowledge of the Lord, as the waters cover
the sea.

“My holy mountain,” also known as Mount Zion, was the highest point in the city of Jerusalem. All three designations—holy mountain, Zion, and Jerusalem—have been used to refer to God’s kingdom on earth.

Isaiah’s vision of a peaceable kingdom prefigures the New Jerusalem: “There shall in no wise enter into it any thing that defileth, neither whatsoever worketh abomination, or maketh a lie” (Revelation 21:27). This kingdom is “full of the knowledge of the Lord,” characterized by Godlike qualities of justice, wisdom, and grace.

By Connie Howard
From the November 15, 1975, issue of the Christian Science Sentinel

After church Peter and his family hurried home to prepare the dinner. Peter’s grandparents, aunts, uncles, and cousins were coming soon. It would be a happy holiday for all of them. But shortly after they arrived home Peter began to feel sick. The thought came to him that it was too bad he was sick today with all the company coming. He tried to turn to God for his healing, but the ache seemed too real. After a while Peter called his mother. She saw he wasn’t feeling well and, sitting on the edge of his bed, she spoke softly to him.

“Peter, do you remember learning the twenty-third Psalm in Sunday School?” she asked.

“That’s right. It says God takes care of us always—the way a shepherd cares for his sheep. You remember how Mary Baker Eddy substitutes ‘divine Love’ for ‘the Lord’ in her interpretation of that psalm to give us a clearer sense of God’s love?”

Peter could only vaguely remember it, so Mother read some of the psalm to him out of Science and Health with Key to the Scriptures. When she came to the line “[Love] prepareth a table before me in the presence of mine enemies” (p. 578), she stopped and asked Peter, “Now God prepares a table of blessings every day for us, but—in the presence of our ‘enemies’? Who do you think our enemies are?”

He thought for a minute. Then his face lit up, and he said, “Why, wrong thoughts are the enemies! Aren’t they?”

“That’s the way it seems to me, Peter. And the Psalmist goes on to say that God gives us special good, and our ‘cup runneth over’ with blessings.”

“And today is a day when we are counting our blessings—Thanksgiving!” said Peter.

“And we’ll all be eating dinner soon, so get washed up. And remember, we’ve invited no enemies to our table. OK?”

“OK!” said Peter. Soon he was enjoying Thanksgiving dinner with his family, perfectly healed. It was a day for really giving thanks.

Thanks, God, for wonderful yesterday,
and for this one that’s on the way.
Remind me, please, to pause to pray
right in the middle of my work or play.
I won’t be pushed by my selfish will;
I’ll try very hard to stop, be still,
to listen to what You’d have me do,
to feel, and think, and see what’s true.

Now this is what I like to say
as I hop out to start the day:
I love You, God; I’m glad to see
the good You have all set for me.

By Mary H. Reed
From the September 13, 1982, issue of the Christian Science Sentinel 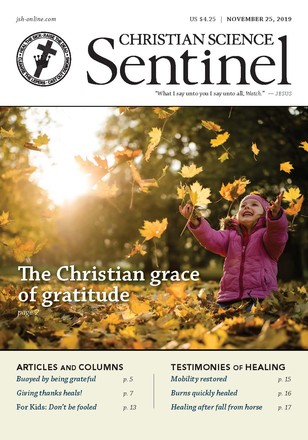 The Christian grace of gratitude

Buoyed by being grateful

Are you limiting your supply of good?

Healing after fall from horse

Thankful for what God can and cannot do