WHEN THE DIVINE PRECEPTS ARE UNDERSTOOD,
THEY UNFOLD THE FOUNDATION OF FELLOWSHIP,
IN WHICH ONE MIND IS NOT AT WAR WITH
ANOTHER, BUT ALL HAVE ONE SPIRIT, GOD,
ONE INTELLIGENT SOURCE, IN ACCORDANCE WITH
THE SCRIPTURAL COMMAND: "LET THIS MIND
BE IN YOU, WHICH WAS ALSO IN CHRIST JESUS."

—MARY BAKER EDDY, SCIENCE AND HEALTH WITH KEY TO THE SCRIPTURES, P. 276

In a recent Google search, I discovered more than 26 million entries for "conflict resolution," leaving the impression that there is an awful lot of "conflict" out there and far too little "resolution." Perhaps that's not so surprising when you realize that resolving disagreements involves trying to blend two sets of opposing or even incompatible views. Still, the numbers suggest there's a huge need for greater harmony and healing in human relations.

Without too much imagining, there seems to be no end to the idea of human social conflict—from workplace tension, to bullying in schoolyards, to sibling rivalry, to discordant marriages. Some conflict resolution counselors contend disagreements are good because they ultimately encourage accommodation, improve persuasive skills, and teach people to disagree without becoming rancorous. Human frictions are useful, they say, because they encourage peacemaking.

A study of Christian Science leaves one in no doubt that conflict resolution is not an exercise in psychology; nor is it found on some counselor's strategic road map to improving human relations. On the most sublime plane of thought, conflict resolution is a spiritual process in which people learn to embrace divinity; or, more accurately, come to understand how divinity embraces them.

I believe the most insightful question one can ask oneself when confronted with frictions and conflicted circumstances is, "OK, how would Jesus, the great Exemplar, have dealt with such a situation? How would he have thought, spoken, or acted under similar circumstances?" The answer seems to be that he always redirected the thoughts of others back toward God and away from themselves or the circumstances of the moment.

On more than a few occasions, the Gospels show that Jesus frequently faced questions remarkably similar to those faced by individuals involved in conflict mediation today. Sometimes Jesus' road map to resolution involved a solution in which wisdom took precedence over a human sense of injustice.

For example, when Jesus' friend Martha of Bethany, his hostess at the time, came to him upset that she was saddled with all the "serving" while her sister Mary was pleasantly listening to Jesus' teaching, his response was a mild rebuke to Martha. Jesus told her that the lessons Mary was learning were more important than lunch (see Luke 10:38–42).

Then there was the man who asked Jesus to speak to his brother and persuade him to divide their inheritance. Jesus' response was, "Man, who made me a judge or a divider over you?" (Luke 12:14). Jesus then attempted to redirect the distressed man away from covetousness and legacies toward the higher things of Spirit, toward the realization that God knows people's needs before they ask Him. Now that was hardly your standard conflict resolution formula of "something for everyone." In both examples, Jesus' solution was anything but a 50/50 split. Instead, he pointedly encouraged the individuals to put their own mental, moral, and spiritual growth before a perceived sense of fairness.

Jesus' practice of spiritual conflict resolution clearly defied convention. When the scribes and Pharisees hauled before him a woman caught committing adultery, "in the very act," he faced a potentially volatile situation from hostile theologians. The setting was the Jewish Tabernacle on the holy Temple Mount in Jerusalem. The Pharisees stridently reminded Jesus that Mosaic law mandated the woman be stoned to death; they wanted her condemned. For Jesus to have contradicted Mosaic law in that venue might have been explosive.

Wisely avoiding a legal confrontation over Mosaic stricture within sight of the Holy of Holies, Jesus raised conflict resolution above human justice and up to the level of divine Love, God's love. Jesus declared, "He that is without sin among you, let him first cast a stone at her." His solutions were spiritual rather than doctrinal. Then he forgave the humiliated woman without condemning her, and said, "Go, and sin no more" (John 8:7, 11). This was the ultimate in conflict resolution because it lifted everyone's thought above the jagged edge of human disagreement and taught forgiveness as a central attribute of a caring, loving God.

Christian Science defines and employs these very same spiritual solutions for disagreements today, both on a global scale and in smaller arenas like the family. Its prescription is prayer whispered into thought—affirmations of the great and powerful truth that God is the only intelligence or Mind, operating even in the midst of contention. Such proclamations defang mortal mind, clearing the atmosphere and revealing the harmonious facts already established in God's purview.

The Science of the Christ is demonstrably the most effective means of resolving human difficulties. It heals the brokenhearted, reconciles children and parents, restores broken marriages, and raises vision above and beyond the horizon of limited mortal perspectives.

CONFLICT RESOLUTION IS A SPIRITUAL PROCESS IN WHICH PEOPLE LEARN TO EMBRACE DIVINITY.

Radical shifts in perspective were essential when, as a reporter, I was covering war zones, including Lebanon and Sarajevo. Not infrequently I found myself at paramilitary checkpoints in very hostile areas. Several times during crossings from one side to another, I faced disgruntled guards with guns. Once in Beirut, a Shiite soldier became quite confrontational and pointed a 9mm pistol at my forehead. Point-blank range. I showed no fear, but quietly talked aloud to him about God's (Allah's) goodness. Because prayer for protection was always part of my preparation for assignments of this kind, I never doubted that God was in control of the situation, and I found myself thinking, "OK, God, how are You going to get him out of this?" There was no question the militiaman's pistol was loaded. Seconds later, a feral cat crossed the street 30 or 40 meters to my left, and the soldier swung his pistol and fired at the cat, scaring it, but missing. The soldier then surprised me by inviting me into his tent to drink tea with him. I accepted his hospitality.

In a single powerful paragraph in The First Church of Christ, Scientist, and Miscellany, Mary Baker Eddy offers her vision of conflict resolution with these words: "Injustice denotes the absence of law. Each day I pray for the pacification of all national difficulties, for the brotherhood of man, for the end of idolatry and infidelity, and for the growth and establishment of Christian religion—Christ's Christianity. ... Each day I pray: 'God bless my enemies; make them Thy friends; give them to know the joy and the peace of love'" (p. 220).

That prayer has helped me through many disturbing confrontations, especially when I've also mentally declared that every foe is an F.O.G., or Friend of God. Even if individuals believe they are dealing with stalemates, they need the spiritual perspective that tells them that divine Love knows no irreconcilable conflicts. Anyone can pray—affirm in the face of warring thought—that the Christ, God's eternal message of peace, destroys hatred, dissolves human prejudice, obduracy, and malice. We'd all do ourselves a favor if we turned to prayer as our first option instead of making it the last. 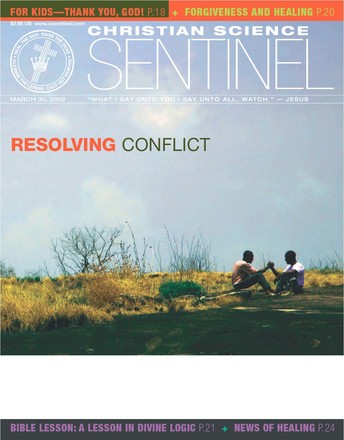 CONFLICTS AS OPPORTUNITIES FOR GOOD

PEACE IN THE COFFEE SHOP

To solve the Russia-Europe energy dispute

PLAYING BY LOVE'S RULE AFTER A LAYOFF

with contributions from Brooke, Collier | March 2009

THE LOGIC OF IT ALL

A LESSON IN DIVINE LOGIC

THE MASTERS AND TRUE MASTERY

By SHELAGH ROBERTSON with contributions from JOHN ROBERTSON | March 2009