My junior year in college was not an easy one. I wasn’t enjoying my studies, and my social life was a bit of a mess after I’d gone through a breakup that left me feeling confused and betrayed. When the school year ended, I was glad to leave for a summer study abroad program in Sweden. But the miles I’d traveled weren’t enough to help me let go of the swirl of emotions I was experiencing. My first journal entry in Sweden waxed on about how depressing it felt to be surrounded by such amazing history, culture, and natural beauty, while my head was still stuck in the messiness of my life back home.

One weekend, several of us in the program traveled by ship to Finland. I had tentative plans to meet extended family, though I wasn’t really sure about the how or where. During the trip over, I glanced out the window to see a huge island moving up and down. As you probably guessed, the island wasn’t moving, but we were. A storm had swept in and the surge was picking the boat up and tossing it around. A violent wave of nausea swept over me. I staggered into the hallway and asked my friend to help me to the bathroom.

As I stood against the back of the bathroom stall, breathing deeply, I opened my thought to God and asked, “What do I need to know here?” A simple word came softly to my thought: rock. This was not at all the “high and mighty, healing truth” I was looking for, so I brushed it aside and asked again. This time the word was not so soft, and my thought was filled with the word rock!

I humbly bowed my head and let this idea expand in my thinking. Some of the qualities of a rock, such as stability and strength, as well as hymns and verses from the Bible, came to mind. I thought of a line in Hymn 293 from the Christian Science Hymnal, which begins “Rock of Ages, Truth divine” (Frederic W. Root). I held to another line from that hymn, “On this rock we are secure,” as if I were in the middle of the sea, hanging on to a rock for safety. I loved the qualities of permanence, security, safety, and solidity that a rock embodies. No matter what a storm throws at a rock, it continues to be a rock, exactly as it always has been. And I held to the idea of divine Truth, God as my dependable rock, keeping me solid and safe.

I took a breath and realized that the nausea had vanished—I was free. When I left the bathroom, I ran into my friend again. He said, “That was quick!” Smiling, I told him that it turned out that I was fine and then we parted ways. I went on to have a weekend full of leaning on God as tentative plans made in three languages came together beautifully. I was able to meet many distant family members and make new friends during my trip.

Throughout that summer, I constantly returned to that high rock. There were struggles, mistakes, and challenges that seemed to toss me back into the bumpy sea, but, little by little, I found my peace. Returning to school, I was able to add a second major. This fresh focus helped me find renewed enjoyment in the subjects that had felt so joyless the year before. The turmoil from the breakup took longer to calm, but eventually I did find healing. The idea of a rock continues to be a favorite in my prayers—a solid trust that God is here and isn’t going anywhere. A rock may get hit by the waves at times, but it doesn’t break easily. It’s solid. 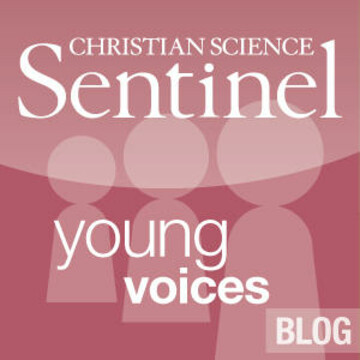 The value of Science and Health in my life

From anger and annoyance, to love

Being a Christian Scientist: What does it mean to me?

From fear to freedom

Tracks on the mountain

A lost key and a lesson in 'leaning'

God's care in my piano lessons

Love has no opposite

Goodness is not a coincidence

No deadline for God's supply