Just as the cause of civil rights for African Americans has called forth passionate response and faithful prayers—and continues to progress as the US elected its first African American President—the right of children worldwide to receive quality education deserves passionate commitment and dedicated prayers.

I thought of this when reading about Palestinian children being trained for terrorism: " 'Martyrdom is bliss,' a child says, referring to a 14-year-old suicide killer" (Harold Evans, US News and World Report, December 19, 2008). At the same time a constant stream of news stories—from a variety of sources—highlight educational concerns worldwide, such as inequitable funding, widening achievement gaps, alarming dropout rates, as well as cultural and religious beliefs that deny girls an education.

Years ago, these and other issues appeared to me to be a kind of darkness surrounding many of the world's children, when inspired and creative educational systems could be enlightening and propelling them to fulfill their unlimited potential. At the time, I felt moved by this thought: "You know what to do about this: Light the children with prayer." Experience has taught me that prayer acknowledging God's love is like a laser light that cuts through whatever would cast shadows.

In our family's metal fabricating business, I've witnessed laser power, where beams of intensely concentrated light are used to slice through thick metal. As amazing as laser light is, its use is still limited—whereas the spiritual light of scientific prayer eliminates all darkness. The Bible declares, "God is light, and in him is no darkness at all." Also: "In him, we live, and move, and have our being" (I John 1:5; Acts 17:28). To me this says, that God—Love itself—is light, and that all of His children exist in that light.

As a world citizen committed to quality education for children, anyone can agree to acknowledge in prayer the Godlike qualities—such as intelligence, courage, persistence—that are expressed by, and on behalf of, children. We can expect such prayer in turn to reveal new ideas and shine a spotlight on what is already working well.

AS AMAZING AS LASER LIGHT IS, ITS USE IS LIMITED—WHEREAS THE SPIRITUAL LIGHT OF SCIENTIFIC PRAYER ELIMINATES ALL DARKNESS.

Genuinely useful education for children doesn't require advanced degrees in sociology or psychology, or even political power or money. It does require a love for all children, an understanding of and love for God as entirely good, and a trust in God's ability and willingness to help His children.

Such acknowledgments bring about the conviction that children are not defenseless. As expressions of God, every child has a grand purpose, and therefore cannot be deprived of his or her vitality and joy, and opportunity to learn. Children cannot be left out in the darkness of ignorance or demoralized by injustice, indoctrination, and inaccurate concepts about them. And under divine Love's care, they cannot be victims of political or ideological agendas, nor deprived of tenderness and protection. As we affirm these truths in our prayers, we invoke the power of God. Healing results.

"Eternal Truth is changing the universe," wrote Mary Baker Eddy in Science and Health. "As mortals drop off their mental swaddling-clothes, thought expands into expression. 'Let there be light,' is the perpetual demand of Truth and Love, changing chaos into order and discord into the music of the spheres" (p. 255). I was grateful for a glimpse of what I perceive as the eternal Truth at work, when I read a New York Times report following a horrific incident in Kandahar, Afghanistan. At the time, as 15 schoolgirls and four teachers walked to school, Taliban men attacked them with acid. Yet despite the resulting disfigurement and continuing threat, the 1,300 girls still enrolled in this school have continued to courageously attend. Against daunting odds their parents support the girls' right to education. The report noted: "In the five years since the Mirwais School for Girls was built ... it appears to have set off something of a social revolution. Even as the Taliban tighten their noose around Kandahar, the girls flock to school each morning. ... The girls burst through the school's walled compound, many of them flinging off head-to-toe garments, bounding, cheering and laughing in ways that are inconceivable outside—for girls and women of any age" ("Afghan Girls, Scarred by Acid, Defy Terror, Embracing School," January 14, 2009).

The light of God's love is breaking through right there, and it can everywhere as we faithfully light up the world's children with prayer. 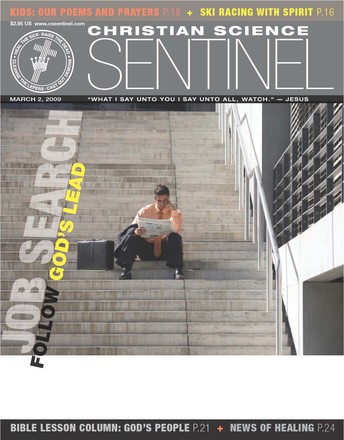 A SPIRITUAL APPROACH TO JOB SEEKING

By Rosalie Dunbar with contributions from Karen McCoy | March 2009

TO FIND A RIGHT POSITION

Our Poems and Prayers

A GOAL TO HELP OTHERS

'ALL THINGS ARE BECOME NEW'

HEAD IN THE SAND?

EDUCATION FOR ALL CHILDREN

By DEBBY BARRON with contributions from STEVE BARRON | March 2009

A GPS WITHOUT EQUAL