This past summer I was really excited about a basketball tournament against one of the best teams in our league. On the way to the gym, my dad and I said a “met” together in the car. The word met is short for a “metaphysical” idea. At the summer camp for Christian Scientists I attend, before every activity we start with a good idea, usually from Mary Baker Eddy’s writings, the Bible, or the Christian Science Hymnal.

Our “met” before the basketball game went along the lines of a quote from Mary Baker Eddy’s Miscellaneous Writings 1883–1896: “Never ask for tomorrow: it is enough that divine Love is an ever-present help; and if you wait, never doubting, you will have all you need every moment” (p. 307).

I really liked the part where it says “you will have all you need every moment.” To me that meant that God was right there on the court and I was expressing God through spiritual qualities. I was grateful that the girls on the other team were good players, because they challenged our team to try harder and become better.

During the game, toward the end of the first quarter, a girl went to make a basket and she hit my mouth with her elbow. The referee stopped the game. Although my mouth hurt, I didn’t think it was a big deal until the ref called my coach onto the court and my teammates came up and asked me if I was OK.

Being angry at someone is like drinking poison and expecting the other person to be harmed.

As it turned out, the girl had hit my front teeth and they were drastically bent back. My lip had been punctured by my braces and my mouth was bleeding, so my coach handed me a towel to stop the bleeding. Then I headed to the bathroom to clean up. My mom met me there immediately and shared with me that I had “never been more perfect” than I was right then. This meant to me that God made and maintains me perfectly. But as soon as I looked in the mirror and saw my teeth, I freaked out and was really mad at the girl who had elbowed me in the mouth. It took a while to calm down, and then I started thinking about Hymn No. 267 in the Hymnal, which goes,

This verse really helped me, because if a building or a house doesn’t have a strong base or foundation, there is no way it can stand. Since the picture of injury in the mirror was “baseless evil” I could take a stand and say “no,” this doesn’t represent my true spiritual identity or anyone else’s. I know that everything God makes is good, so the picture I was seeing in the mirror had to be false if it wasn’t showing me my true unblemished perfection.

After I prayed with this idea, I went back into the gym and was able to finish watching the game.

But seeing the girl who hit me was making me upset, especially since she was playing really well. A lot of not-so-kind feelings were surfacing. Just then a thought came to me from one of my Sunday School teachers. We’d talked about how when you’re mad at someone and holding on to anger, you are hurting only yourself. Being angry at someone is like drinking poison and expecting the other person to be harmed.

When I started appreciating that this girl was a child of God, I was able to let go of my anger toward her. As soon as the game was over she came up and apologized for hitting me with her elbow and asked me if I was OK. I told her that I was fine and that I wasn’t mad at her. I knew it wasn’t intentional. At first it surprised me that I said this, but then I realized it was true. Although the physical picture looked bad, I knew that God made and maintains me perfectly. I was able to let go of all my anger.

A hot-tempered man stirs up strife, but he who is slow to anger quiets contention.

The next day, I went to the orthodontist to see if he could fix my braces. The first thing he said after seeing my teeth was that I was really lucky I had a big wire in to keep my teeth secured in my mouth. After he took out the old wire and put in a new smaller wire, my teeth began to adjust immediately until they looked exactly the same as they did before. I told my dad about this and about how lucky I was that I had braces so my teeth didn’t come out. He said that even if I didn’t have braces, God would have shown me protection and perfect healing in some other way.

What my dad said immediately hit home, because God is much more powerful than a piece of wire. I started wearing a mouth guard during basketball, but I know God is always my real protection.

Brittany Duke is in ninth grade. She lives in Missouri and loves to play basketball, volleyball, tennis, and spend time with friends. 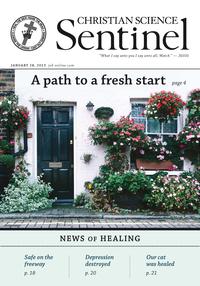