AT HOME AT CAMP

I WAS LYING IN BED, HOURS AFTER "FLASHLIGHTS OUT." My family, my dog, Carmel, and my best friend all flashed through my mind. I was also thinking about my older brother, who had just started football camp back at home, and I worried about his safety. My face felt hot and wet as I quietly cried into my pillow. But why was I sad? Wasn't I supposed to be happy at summer camp?

This wasn't my first time away from home, and I'd felt homesick before. But for some reason, this year the homesickness hit me as soon as I'd stepped off the plane. It was too late to turn back. I'd already committed to four weeks of camp.

I thought the fun of being at camp again might make it all better. I'd been looking forward to swimming, campouts, meeting new friends, and growing spirituality. Instead, two days had already passed and I was still missing home. And I had no idea how to deal with it.

It didn't help that I'd arrived a day earlier than everyone else in my session. That first day, I felt as if I didn't know anyone and I wasn't sure how to fit in. When I found out my bunkmate was feeling the same way, too, we talked about it for hours on end, even planning on how we could leave camp early.

At one point, after almost a week had passed, I was determined to catch a flight home the next morning. That's when my bunkmate told me she'd decided to pray about her homesickness with a counselor and asked me if I would join her. I agreed, somewhat reluctantly.

That night the counselor asked us to make a point of noticing the good in each day. I thought that sounded easy. I was happy to notice the good, but I was determined it still wouldn't change my mind. I didn't want to stay at camp—in fact, I didn't even want to feel better. I just wanted to go home.

A few days later, during our morning meeting (when we studied the weekly Christian Science Bible Lesson with the entire camp), my bunkmate told me she wasn't homesick anymore and was ready to do everything and anything with a smile. I told her it was great she felt better—and that I wanted to change my attitude, too. Despite everyone's best intentions, I was still feeling sorry for myself and missing home.

But it was amazing. After I talked to my friend that morning, something changed. Instead of giving into the thoughts that said I was sad, out of place, and bummed out, I decided to slowly fight against those thoughts. Each night when I got into my bunk, I would think about the good in my day, and recognize that the good came from God, just as the counselor had suggested. My new focus began to chip away at the negative thoughts that would pop into my head, including ones of envy and dislike. I'd been watching the other campers having fun, while I was feeling separated from the good they were experiencing. I knew that I shouldn't be feeling that way, since God treats each of His children equally. So I recognized that I could be a part of the same good they were experiencing.

Also, each day during the morning inspirational meeting we had, I would dig into the inspiring testimonies and spiritual thoughts that people shared for the day. I would often work with the ideas from a hymn in the Christian Science Hymnal:

Green pastures are before me,
Which yet I have not seen;
Bright skies will soon be o'er me,
Where darkest clouds have
been.

Another idea I liked was posted on a big plaque in the dining hall. It was a quote by Mrs. Eddy: "What we most need is the prayer of fervent desire for growth in grace, expressed in patience, meekness, love, and good deeds" (Science and Health, p. 4). I decided to spend more time practicing these qualities and doing good to others, so I could grow spiritually.

Soon, I began to have a breakthrough. I felt happy again.

One night, almost two weeks into camp, my bunkmate and I went out and sat on the rocks along the lakeshore. We talked for a long time about religion and our feelings about Christian Science. I also mentioned my fears about my brother playing football, and I told her that I realized he could never be left out of good or joy, just as I couldn't, because we are never separate from God. My friend was really understanding, and I felt as if we made a nice connection that night.

INSTEAD OF GIVING INTO THE THOUGHTS THAT SAID I WAS SAD, OUT OF PLACE, AND BUMMED OUT, I DECIDED TO SLOWLY FIGHT AGAINST THOSE THOUGHTS.

After that, the homesickness was totally gone, and I no longer felt alone and different. I still thought of my family, but didn't cry myself to sleep anymore. I enjoyed my time at camp profusely. Not a moment of my time there was wasted without a smile. My bunkmate and I had so much fun together making marionettes and doing so many more amazing activities that were offered at camp.

This experience taught me that I could find my home away from home at camp—and that it was really how I thought about it that mattered the most.

This year, as I prepared to go to camp, I knew that feeling at home and being joyful are God-given qualities. They aren't actually limited to a physical place, as wonderful as that place may be. css

Do you have something to say?

Ariana Dale will be a freshman in high school in the fall. She loves playing sports, doing crafts, and chilling with her friends at the beach. 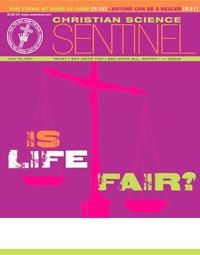