During the summer before my freshman year of high school, I attended a camp for Christian Scientists in Colorado. While I was there, my friends and I challenged ourselves to peak a 14,000-foot mountain called “Yale.” I have been hiking my whole life, but I had never peaked a mountain before—so I was really looking forward to this opportunity.

The day before this climb, my shoulder and arm had been hurting and I had been feeling sharp pain all the way to my fingers. During the hike the next day, the pain grew even greater, and although we made it to the top of the mountain—an exhilarating feeling—I was getting worried.

When we were on our way down the mountain, I slipped and fell and landed on the arm that had been hurting. As I got up, I found I couldn’t move my wrist or my fingers. A counselor helped me down the mountain, and when we returned to camp, I went to see the Christian Science practitioner who works there.

I had relied on Christian Science for healing my whole life, and I knew this issue with my arm could be healed too. The practitioner and I prayed together, and she reminded me that divine Mind, God, has all power. Mary Baker Eddy wrote in Science and Health with Key to the Scriptures that “Mind is the source of all movement, and there is no inertia to retard or check its perpetual and harmonious action” (p. 283). I held on to this simple truth throughout the entire day. I also visited the Christian Science nurse who works at camp, and she wrapped my wrist and put my arm in a sling.

Even though I wasn’t able to move my wrist or fingers, and my shoulder was still bothering me, I felt peaceful and cared for, and I was able to do all the activities with the other campers. Over the next few days I continued praying with the camp practitioner, knowing that I could be grateful for God’s work, which is complete and perfect—an injury simply couldn’t be a part of that work!

A few days later the camp session ended, and I flew to California for a ten-day family vacation. I was able to continue to work with the Christian Science practitioner, and she reminded me to express love toward everyone around me. At first, I didn’t really understand what she meant because I didn’t think it would help my arm. But now I understand that when you love others, it helps to clear your thinking—you’re focused on seeing others as God sees them, instead of on a mistaken view of yourself or others as material or limited.

When you love others, it helps to clear your thinking.

The first night in California, I realized that I could really take a stand against error—against a picture that said I was material and susceptible to accidents, rather than spiritual, created in God’s image and likeness. As I was lying in bed, I realized that what really needed to be healed was my thought, not a painful arm. I opened up the Christian Science Hymnal to Hymn No. 148, which begins, “In heavenly Love abiding, / No change my heart shall fear” (Anna L. Waring). My mom had mentioned to me earlier that day that sometimes pain in our day-to-day experience can have to do with fear in our thought. I realized that I’d been feeling some fear that my activity—including having fun at camp and with my brothers—could be limited. But I could get rid of fear in my thinking!

Further along in the hymn, I read these words:

I decided that the “storm” of fear would have to “roar without me,” because God was all around and I had nothing to fear.

Then I remembered an idea that someone had shared at a Wednesday evening testimony meeting I’d attended at camp. It was called the three R’s—reject, replace, rejoice. Following this concept, I rejected the idea that I was contained in a material body that could be limited or injured and replaced it with the idea that I was a perfect expression of God. God has no limits, which means that, since I reflect Him, neither do I.

The next morning when I woke up, I was completely healed. I was so happy! I could freely move my shoulder without pain, and I had full function in my wrist and fingers, whereas just the night before, I wasn’t able to move them well at all.

I have grown up relying on Christian Science healing, but I never felt that I completely understood the effectiveness of prayer or exactly how to pray until this experience. I learned that I was not praying to be free from a specific physical condition, but instead I was praying to get rid of fear and limitation in my thinking. I am truly grateful for this experience.

Taylor MacIntire will be a senior in high school in the fall. In her free time she loves to read, travel, and row on her crew team.

This article is included in:
2014 - SPECIAL EDITION

A Collection for Teens - January–June 2014 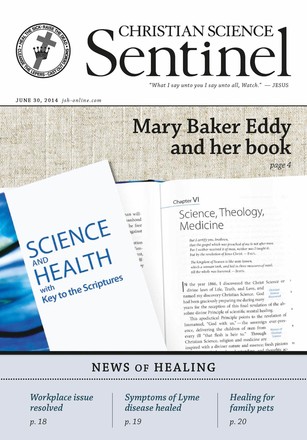 Lessons from a yard sale

The golden thread of liberty

Look up and see!