As a youngster I was a sickly child and was regularly given large doses of medicine until my early teens. My mother had died of cancer, and our life at home was an unhappy one. But I was a spiritually minded child. I could see that if there was such a thing as eternity, it had to include the present—it couldn’t include a beginning or end to life.

I understood that everything that expresses life expresses God, but I could not grasp why matter was needed for its manifestation. On one of my daily walks to enjoy the countryside outside Belfast, I found myself reaching out to God for a prayerful answer to this enigma.

At that moment of complete yielding to Deity, it came to me clearly that all life-expression was of God—and that it was our human perception of this that made it appear material. “My,” I thought, “that’s wonderful! But isn’t it rather unbelievable? And if it’s true, why don’t others see it?” Then it came to me that perhaps there was a group of thinkers somewhere in the world who thought in that way, and that one day I might be guided to find them.

At school I noticed a young chap with whom I came into contact only in shared music lessons. But I could see he had something beyond what the world knew, and I resolved to find this out. When I talked with him, I found out his mother had been healed of cancer through Christian Science. This impressed me greatly, and later on led to my study of Christian Science.

A desire for a musical career led me to the armed services, which had a need of musicians. At age 16 I joined the Brigade of Guards and moved to London, a hub of musical activity. I also saw this as a way to begin my study of Christian Science. Through contact with a local Church of Christ, Scientist, I acquired a copy of Science and Health with Key to the Scriptures by Mary Baker Eddy. I became fully absorbed in this book and immediately began to put some of its teachings into practical use.

One by one, difficulties from childhood were dropped as I grew in spiritual understanding. I stopped taking medicine and gained more coordinated, balanced control of my body. I was able to march, ride, and learn a new musical instrument—the clarinet. I learned to cope with the army mentality by understanding in Science that the real man cannot be touched or intimidated by mortal mind, and that God controls and guides every one of His children, His spiritual ideas.

Many other examples of God’s care and direction followed during army service, including my release to attend Trinity College of Music in London. By this time I had joined The Mother Church and was ready for a forward step. I learned to apply my practice of Christian Science—and the discipline I’d gained in army life—to serious musical study. I could see that I was complete and that my abilities came from God. And I treasured Mrs. Eddy’s statement, “The devotion of thought to an honest achievement makes the achievement possible” (Science and Health, p. 199).

Since then, I have found great confidence in perceiving public performance as the unfoldment of what is already a complete idea. If I have prepared honestly and diligently, nothing can stand in the way of the immediate evidence of this. This approach has been effective in many years of performance with orchestras, as a church soloist, and as a cathedral chorister.

I am grateful for God’s protecting power through a knowledge of Christian Science in my life, especially during frequent return visits to Northern Ireland. I’m thankful for membership in The Mother Church—that great universal movement for good in the world—and the Christian Science College Organization at the Music Colleges in London. And I give thanks for class instruction in Christian Science, which provides the tools for daily demonstration and spiritual growth. 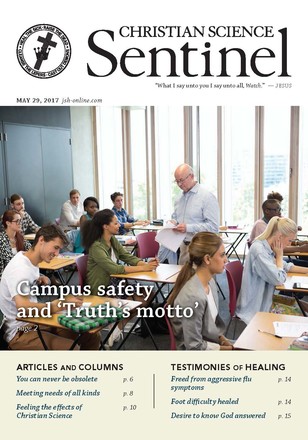 By Moriah Early-Manchester, Linda Bargmann | May 2017

You can never be obsolete

Meeting needs of all kinds

Feeling the effects of Christian Science

By Frederick James Campbell | May 2017

By Barbara Highton Williams | May 2017