The difference between ignorance and innocence

When I was a student at grammar school in England (similar to high school in the United States), a lot of my friends started going to nightclubs even though they were too young to do so legally. Some of them would boast about the guys they met and about their subsequent physical relationships. I knew it was wrong for me to go to clubs, because I was underage, too, but sometimes I felt pressured and inadequate because I wasn't in on all their supposedly adult experiences. My friends told me that I was missing out on an important stage of growing up. I really had to stand my ground in the face of their allegations.

I was, however, learning other lessons that were much more important. At the Sunday School I attended every week, I was gaining a sense of my true identity. In the Christian Science textbook, Science and Health, I read, "Children should be allowed to remain children in knowledge, and should become men and women only through growth in the understanding of man's higher nature" (p. 62). At first I thought that meant I should remain ignorant or naive, but that isn't the case. I learned that since I am the child of God, made in His perfect image, I have unlimited access to everything that I need. God's goodness is infinite, and I have my being within it. Therefore, I could turn directly to God for guidance and joy.

These lessons were very important to me during my time at school. They helped me realize that God provided all the experience I needed to mature spiritually, so there was no way I could miss out on any part of my "growing up." God's love for me is boundless, and He supplies all good. If my life did not include having a boyfriend or going out at night, then perhaps I just didn't need those experiences at that time.

My friends soon noticed that I was happy without alcohol.

There were distinct benefits to this perspective. Not being distracted by inappropriate social experiences meant I could concentrate better on my studies. I also found over time that I avoided the problems associated with drugs, alcohol, and sex outside of marriage that many of my friends had to face.

When I reached the appropriate age, I decided to start joining my friends at pubs and clubs for evenings out. I was surprised by the extent that my friends seemed to rely on alcohol to have fun. No one in my family drank, and we had plenty of fun times together. At first, I was uncomfortable when I was out with my friends, but soon I began to use what I had learned in Sunday School to reaffirm my understanding of man's higher nature and to clarify my reasons for being out with my friends. After all, God is everywhere, so I could never be outside His influence. Expressing Godlike qualities, such as joy, love, and goodness, had always brought me the most happiness. I could express those qualities anywhere. I remembered I was expressing honesty every time I got to the door of a pub or night club, because I knew I was old enough to be there. I realized that since God was there with us, I could always find and live these good qualities.

My friends soon noticed that I was happy without alcohol and that they could not persuade me to change my habits. In fact, it didn't take long for them to see that I actually had a better time than they did, since I never suffered from the aftereffects of alcohol poisoning and never had a hangover the next day. By constantly acknowledging that the source of my happiness was God, I could feel the genuine enjoyment that is not dependent on a drug. I also found that this frame of mind made it easier for me to hear and follow God's direction, which helped me resist temptation. As Jesus said, "Blessed are the pure in heart: for they shall see God" (Matt. 5:8).

By protecting your innocence, you can move through the world with more freedom, not less. Every day we are confronted with choices. We can choose not to take part in activities that ultimately have nothing to do with who we really are. We already have our true identity as the image and likeness of God, and this can't be adulterated. We never need to feel that being a "child in knowledge" means that we're ignorant of anything good or that we're missing out on anything, because as God's child we are complete and unlimited.

Send a comment to the editors
NEXT IN THIS ISSUE
Testimony of Healing
Fear overcome; eyesight restored 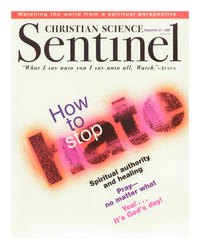