From the Office of Committee on Publication

The ninth chapter of John in the Bible recounts that when Jesus healed a man who had been blind from birth, the response of the local leaders was to deny that the healing had occurred. When the fact of the healing couldn’t be denied, the leaders sought to discredit Jesus, describing him as “a sinner” and contending that the healing couldn’t therefore be attributed to him. When the man who had been healed insisted that it was Jesus who had healed him, they “reviled” the man and cast him out of the temple.

The fact of healing in Christian Scientists’ experience over the years has often encountered similar denial and disbelief. This isn’t surprising, and it certainly isn’t personal in nature. Today, as in Jesus’ time, Christian healing challenges the limits of finite mortal thinking. It calls into question the basic belief of life in matter—the mindset within which people typically reason and think. And it does so, not just theoretically, but practically, as Christ Jesus did. It’s evident, as the Science of Christianity brings out, that he saw and thought about life in very different terms than the rest of us ordinarily do.

The blanket denial of Christian healing today has its source in the materialism that colors so much of contemporary thought, especially in the academic community. The two commentaries reprinted below respond to this denial. They don’t dismiss the questions raised by many who are skeptical of Christian Scientists’ healing practice. They acknowledge that serious questions deserve serious and thoughtful answers. They were written in the conviction that patience, understanding, truth—and Christian Scientists’ actual healing works, more than words—will ultimately find response in the hearts of honest thinkers.

A commentary in the Sierra Vista (Arizona) Herald, “Healing and the nature of humanity: A Christian Scientist’s view”:

Is human experience limited to what can be measured with scientific instruments? If not, what is the nature of reality? A Herald column [by a sociology graduate student] raised these and other issues that thinking people, religious and nonreligious alike, have wrestled with through the ages. As a Christian Scientist, I agree that questions so important need answers grounded in reason and practical experience.

More than a century ago, as sociologist Emile Durkheim gathered data to support his theory that religion is the product of human rather than divine activity, religious leader Mary Baker Eddy sought evidence for a “scientific” Christianity based on spiritual law. Eddy viewed the unmatched life and teachings of Jesus Christ as the supreme example of divine truth. But she agreed with Durkheim that believing wasn’t enough. As she wrote in Science and Health with Key to the Scriptures, “The hour has struck when proof and demonstration, instead of opinion and dogma, are summoned to the support of Christianity …” (p. 342).

Eddy felt that Christians need to live and demonstrate—not merely preach—Jesus’ teachings by following in some measure his example of healing sickness and sin. For her, genuine Christian healing wasn’t “supernatural,” a matter of praying for miracles, or even “having enough faith,” as one might have in a placebo. As she understood it, turning to God in prayer for healing, as Jesus’ disciples had, involves deepening of character, genuine moral uprising, spiritual growth in grace and understanding, the purifying of a heart in communion with God.

What was the result? In Eddy’s day, William James, a leading secular philosopher and trained physician, said of the healings that were occurring: “I assuredly hold no brief for any of these healers…. But their facts are patent and startling….”

More recently, a rigorous “Empirical Analysis of Medical Evidence in Christian Science Testimonies of Healing, 1969–1988,” published by the denomination, examined more than 10,000 instances of physical healing in published accounts. Some 2,337 of these comprised significant healings of medically diagnosed conditions, involving hundreds of specialists, hospitals, X-rays, and follow-up examinations, including 222 cases given terminal or life-threatening prognoses by physicians.

Such healings have often been dismissed as “obviously” impossible—the fantasy of deluded believers—or as examples of some as-yet-unexplained power of the human mind. To this day, objective examination of prayer and religious healing by physical scientists remains infrequent and problematic.

Yet these healings happened. Even in this technological era, it’s hard to brush aside so many experiences. As a Christian Scientist wrote in a church publication, denial and disbelief “can’t erase the simple, striking fact of healing, often in defiance of medical expectation, in so many thousands of people’s lives.”

Of course, a list of conditions healed doesn’t illumine the individual human encounter with the power of God, divine Love. The practice of healing is humbling, and no thoughtful person would say that authentic Christianity is easy. Christian Scientists are deeply conscious of how much more we have to learn about this power and practice of Love and how it heals.

Still, such healing has tremendous meaning, not only for Christian Scientists but for humanity—for understanding who and what we are. Are we just transient biological packages, or is there more to each of us, an irreducible spiritual identity at our core? As the book of Job declares, “There is a spirit in man.” The great breakthroughs of spiritual inspiration that have moved humanity forward haven’t necessarily fit what people at the time considered explicable in material terms—and still don’t today.

From a comment posted in response to a National Geographic article on placebos:

Today, many wonder about the relevance of Jesus; some consider whether science might soon replace religion entirely. For me, there is nothing more relevant or meaningful than the lived Christianity I have found in the form of Christian Science healing—and with it, a new, spiritual sense of life that can’t be sufficiently explained as a placebo or any other mental or physical process of the brain.

The denomination’s founder, Mary Baker Eddy, had her own journey toward such a conclusion. In her own search for health, she experimented with—among other medical methods of the period—homeopathy, and ultimately came to the recognition that the curative effects observed were essentially a placebo, though the term itself had not yet been invented. Eventually, though, she came to see the power of genuine prayer to heal as something distinct, and as having broad implications for humanity. She described such healing in the preface of her book Science and Health with Key to the Scriptures: “Now, as then, these mighty works are not supernatural, but supremely natural. They are the sign of Immanuel, or ‘God with us,’—a divine influence ever present in human consciousness … coming now as was promised aforetime,” in the words of the biblical Isaiah, “ ‘To preach deliverance to the captives [of sense], / And recovering of sight to the blind, / To set at liberty them that are bruised’ ” (p. xi) ….

In my own spiritual path as a Christian Scientist, I have found healing in the face of many challenges, many of a physical nature, including internal bleeding, infections, flu, and sciatica, just to name a few. Many thousands of such cases have been recorded over the past 150 years in our Church’s periodicals…. These just can’t all be written off as the effect of suggestion, nor does true prayer feel like that….

[I]f such healings are real, medical practice itself may even now have much more to learn about a healing power that goes beyond physical processes—or conventional mind-body effects. I feel privileged to know many physicians who recognize and are actively seeking a deeper understanding of the spiritual dimensions of healing in their own practice. These dimensions are more relevant than ever in spite of those assumptions that would reduce human beings to biophysical mechanics. The Gospel of John records that a very worldly woman once asked, after her encounter with Jesus, “Is not this the Christ?” (4:29). The Christ is still needed in a world that’s desperately seeking healing in so many ways. 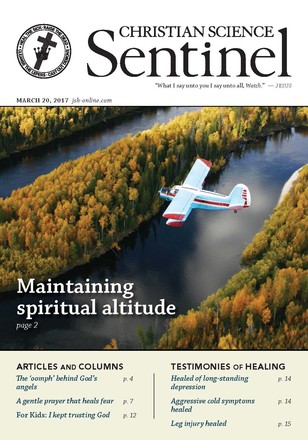 The ‘oomph’ behind God’s angels

Win the game, or win at life?

A gentle prayer that heals fear

The fact of healing in Christian Scientists’ experience

from the Office of Committee on Publication | March 2017

By The Monitor’s Editorial Board | March 2017